Can Supplementation with Vitamin D Reduce the Risk of Falls in Older Adults?

Vitamin D Supplementation and Bone Mineral Density: Is There an Effect?

Dr. Fortney reports no financial relationships relevant to this field of study.

Synopsis: Large-scale observation data indicate an inverse association with circulating vitamin D levels and risk of death due to all causes, particularly cardiovascular and cancer-related death, while supplementation with vitamin D3 appears to reduce overall mortality among older adults.

For the past 20 years, vitamin D has slowly and steadily gained interest among the lay public and researchers alike. Unlike the popular histories of other vitamin supplements,1 vitamin D has shown consistent and growing promise as an efficacious health intervention for reduction of cardiovascular and cancer-related death. More recently, this large systemic review and meta-analysis of 73 observational cohort studies involving nearly 900,000 participants, and of 22 randomized controlled trials (RCT) including more than 30,000 participants, supports the argument that that vitamin D is important for health and prevention. The authors of this review conclude that there is an inverse association of 25-hydroxyvitamin D serum levels with risks of death due to cardiovascular disease, cancer, and other causes. Similarly, supplementation with vitamin D3 also appears to reduce overall mortality among the elderly. What remains unknown is whether supplementation of vitamin D2 vs D3, in what groups of people, at what stage of the lifecycle, for how long, and at what optimal dose, may most favorably effect morbidity and mortality outcomes. 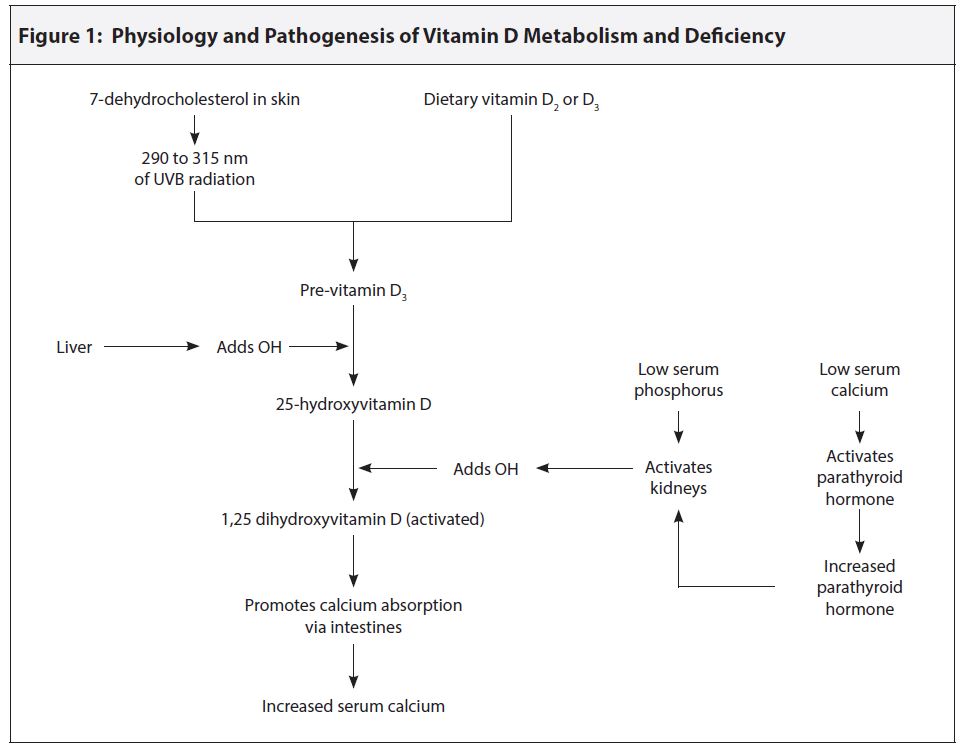 This large review and meta-analysis contributes further evidence in favor of addressing vitamin D deficiency (< 20 ng/mL) and insufficiency (20-30 ng/mL) among most adults. In looking at 73 cohort studies comparing low and normal vitamin D serum levels, as well as 22 randomized, controlled trials where vitamin D was given alone vs placebo, the authors of this large and thorough review report encouraging findings that suggest moderate but significantly meaningful risk reduction for all-cause mortality that may actually be on par with other health risks such as smoking, alcohol consumption, and physical inactivity.

Stepping back to look at the history of vitamin D begins in the 19th century when vitamin D deficiency was identified as a cause of rickets, particularly in children living in industrialized urban areas. This observation lead to a responsive public health movement that began supplementing various foods with vitamin D, which in turn resulted in decreased health problems from vitamin D deficiency. More recently, however, low vitamin D has been linked with other conditions among people of all ages, but especially the elderly, poor, and chronically ill. However, more current research continues to show that many young healthy individuals without any identifiable risk factors were still found to have very low levels of circulating vitamin D.2

The physiology and pathogenesis of vitamin D metabolism and deficiency is complex and involves multiple steps worth reviewing briefly (see Figure). Activation begins with ingestion of either ergocalciferol (D2 extracted from irradiated yeast and plant sterols) or cholecalciferol (D3 obtained from oily fish), or by UVB irradiation of 7-dehydrocholesterol in the skin. These precursors then circulate to the liver, where they are hydroxylated into 25-hydroxyvitamin D (the preferred clinical laboratory test for vitamin D). From there, 25-hydroxyvitamin D circulates to the kidneys, where it is further hydroxylated into 1,25 dihydroxyvitamin D, which is the most metabolically active form in the body.

Feedback loops involving absorption of calcium in the intestines and calcium detection by the parathyroid glands also play a key role in activating, mobilizing, and maintaining vitamin D levels, which is important for a host of biological processes such as cellular growth and regulation among many others. What’s more, there are approximately 3000 different binding sites for vitamin D throughout the human genome, and receptors are present in all human tissues, indicating a wide range of known and yet unknown functions.3 Risk factors for vitamin D deficiency include age > 65 years, breastfeeding mothers, darkly pigmented skin, insufficient sunlight exposure, certain medications (e.g., antipsychotics, anticonvulsants, and glucocorticosteroids), obesity, physical inactivity, liver and kidney disease, other chronic illnesses, and low socioeconomic status.4

What has been less clear in the past 10 years is what role vitamin D plays in various other conditions such as depression, chronic pain, cancer, hypertension, diabetes, acute respiratory infections, and other infections. Other clinical questions include who should be screened for vitamin D deficiency/insufficiency, at what times of the life cycle, and how often.

Returning to the review by Chowdury et al, the strengths of this meta-analysis are numerous. First, it sheds light on some of the most important public health questions regarding vitamin D, namely: 1) are low levels associated with any significant risk of premature death; 2) does supplementing with vitamin D improve mortality in meaningful ways; and 3) what form of vitamin D (e.g., D2 or D3) is preferred?

This review is also large and broad. It included analysis of more than 900,000 participants from both an observational cohort-controlled perspective, as well as the gold standard of 22 RCTs that compared vitamin D supplementation alone vs placebo or no treatment while controlling for obvious confounding variables. While the downfall to many meta-analyses is determining what studies to include and exclude, this review is clear and convincing in identifying the criteria used for inclusion and quality.

To start, more than 2700 studies were identified and considered. After initial screening by two separate and independent investigators, a final consensus on only 95 of these was reached by involving a third investigator. These studies were selected based on strict inclusion criteria. Study-specific relative risks were then determined and analyzed using random effects models, and finally grouped by study and population characteristics to finalize the results. This methodological approach is very appropriate in this setting, given the variability of participants (e.g., older vs younger), sample sizes, and overall effects. For comparison with previous reviews, this meta-analysis involved 10 times as many participants and three times as many mortality outcomes.

Overall, the principle findings from this review generally concur with and advance those findings from previous research studies. Unlike preceding reviews, however, this large and rigorous analysis only included RCTs that administered vitamin D, thus controlling for effects from other supplements and vitamins. This review also used pre-selected vitamin D cutoffs before making any conclusions. In comparing the bottom one-third and top one-third of reported circulating 25-hydroxyvitamin D levels among participants, there was a relative risk (RR) of 1.35 (95% confidence interval, 1.13-1.61) for death from cardiovascular disease and 1.14 (1.01-1.29) for death due to cancer for those participants with the lowest serum levels of vitamin. Additionally, the RR for non-vascular, non-cancer death and for all-cause mortality was 1.30 (1.07-1.59) and 1.35 (1.22-1.49), respectively (P values > 0.05 for all). These findings are of particular importance given that heart disease, cancer, and stroke are the number 1, 2, and 4 causes of death, respectively, in the United States, according to the Centers for Disease Control and Prevention, accounting for more than 1.2 million deaths annually.5 By using population prevalence estimates of vitamin D deficiency from this study, this means that 12.8% of all deaths in the United States annually can be attributed to vitamin D deficiency. In other words, each 10 ng/mL decline of serum vitamin D concentration was associated with a 16% increased risk of all-cause mortality.

Compared with other known risk factors of chronic disease and death, the risk of death due to low circulating vitamin D levels in the United States appears to be substantial at 13% vs 20% for smoking, 11% for physical inactivity, and 9% for alcohol consumption. It should also be pointed out that: 1) most of the studies included in this review were also controlled for variable lifestyle and diverse population characteristics (e.g., low socioeconomic status, insufficient sunlight exposure, poor diet, obesity, etc.); and 2) pooled estimates remained unchanged when further stratified and adjusted for these various lifestyle factors that could have affected the results.

The authors appropriately point out that caution should nonetheless be used before drawing firm conclusions, in that most vitamin D studies have only involved older individuals with a generally higher rate of death due to comorbidities anyway, and are relatively brief in terms of intervention and observation timelines (generally 1 year or less). They also emphasize the need for future RCTs over substantially longer timeframes that involve non-institutionalized general populations of significant scale and diversity. It still remains unknown what dose, type, and duration of supplementation may be needed to better understand the broader range of associated morbidity and mortality outcomes.

Before too much excitement is elicited from the conclusions of this meta-analysis, it should be noted that another recent, very large systematic review concluded that despite the encouraging associations between vitamin D and mortality outcomes, firm universal conclusions and recommendations cannot yet be made.6

Finally, the question of D2 vs D3 supplementation, in terms of health benefit and disease prevention, has long been unclear and debated. While the RCT aspect of this review indicated no improved mortality among older adults when given vitamin D, further stratification of the data reveal an interesting and encouraging trend. Supplementation with D3 was found to significantly reduce all-cause mortality by 11% (CI, 0.80-0.99, P < 0.05) compared to no overall mortality effect or protection from D2. This finding may be explained in part due to the fact that D2 is less potent and biologically active than D3.7 Another possible explanation is the observation that, in the absence of concomitant use of calcium supplementation with D2, there is an accompanying lower 25-hydroxyvitamin D concentration compared to D3.8

Nonetheless, more work is needed to identify what form of vitamin D supplementation is most efficient, cost-effective, efficacious, and safe before additional widespread supplementation recommendations can be made. For the time being, the benefits appear to greatly outweigh the risks for vitamin D supplementation, when used appropriately. However, vitamin D toxicity (> 150 ng/mL) can result from taking too much vitamin D for too long (> 10,000 IU of D3 or
> 50,000 IU of D2 daily for > 3 months). Taking more than 300,000 IU of vitamin D in 24 hours can also be dangerous due to significant increases in serium calcium levels. (See www.vitamindcouncil.org for more information on vitamin D toxicity)

Recent guidelines from the National Institutes of Health and the Institute of Medicine recommend supplementing with 600-800 IU of vitamin D3 daily for adults,9 while other medical conditions (e.g., eczema and heart disease) may require 1000-2000 IU daily.10 Recognizing that there is a dose-dependent increase of skin cancer risk with unprotected sunlight exposure, a more natural form of boosting vitamin D involves exposing the skin to sunlight (UVB) for 10-15 minutes a day for fair skinned people or up to 1-2 hours a day for very dark skinned people. More specific information on sunlight therapy for vitamin D production regarding skin types, latitude location, time of day, and time of year can be found at www.vitamindcouncil.org online.

Exercise and Gut Flora: Suggestions But No Final Answers

Licorice as an Agent in Helicobacter pylori Quadruple Therapy Regime

Not So Sweet: Artificial Sweeteners Contribute to Dysbiosis and Glucose Intolerance

Probiotics and the Microbiome