With The Outbreak Of Ebola Virus Disease (Ebd) Accelerating In West Africa, Public Health Authorities Are Urging Frontline Providers In The United States To Be Vigilant In Questioning Patients Who Present With A Suspected Infectious Disease, And In Adhering To Infection Control Practices. Recent Travel To West Africa And Contact With Others Who May Have Been Exposed To Evd Are Key Points That Need To Be Covered At Triage, Say Experts. The World Health Organization (Who) Indicates That Mortality From The Latest Outbreak Is 55%, Although It Is As High As 75% In Guinea.

• Health care workers are particularly vulnerable to EVD, with WHO noting that more than 250 workers in West Africa have contracted EVD and at least 120 have died from the disease.

• Experts say that one of the greatest times of risk for health care workers is while a patient is at triage because he or she has not yet been placed in isolation precautions.

• The CDC is recommending that hospitals rigorously apply standard infection control policies at a minimum, and that extra protective equipment may be required when there are body fluids in the patient environment.

• Hospitals in 27 states have reported dozens of suspected cases of EVD to the CDC, but at press time, none had yet tested positive.

There has yet to be a single patient diagnosed with Ebola virus disease (EVD) in the United States, but current trends regarding the latest outbreak of EVD in West Africa have public health authorities here concerned. By the end of August, the World Health Organization (WHO) said the epidemic was accelerating, and that as many as 20,000 people could be infected with EVD before the epidemic is brought under control. Also concerning is the fact that mortality from the current outbreak is about 55%, although it is as high as 75% in Guinea, according to WHO.

Already, there have been more than 3,000 confirmed cases of EVD and more than 1,500 deaths, but WHO suggests the actual numbers may be much higher. Further, while the disease is currently concentrated in Guinea, Liberia, Sierra Leone, and Nigeria, there is clearly a risk that the disease could spread. With international travel to and from West Africa, people who have been exposed to the virus could bring the disease to other countries, including the United States. Consequently, public health authorities here are urging hospitals to be prepared.

It is not just a matter of protecting patients from the deadly infection. Health care workers are particularly vulnerable to EVD. More than 250 health care workers in West Africa have contracted the virus and 120 have died of the disease, according to WHO. The agency states that many of these victims contracted EVD while caring for patients without taking proper infection control precautions. In some instances, the health care workers may not have realized that the patients they were caring for had EVD because this is the first time an EVD outbreak has occurred in this region of Africa.

To make sure a case does not go unidentified in the United States, the Centers for Disease Control (CDC) in Atlanta, GA, recommends that frontline health care personnel familiarize themselves with the case definitions for EVD and take steps to rule out the diagnosis in patients who present with symptoms of infectious disease.

"One of the greatest times of risk for health care workers is before they have identified a case because at this point the patient has not been placed in isolation precautions," explains David Kuhar, MD, medical officer, Division of Healthcare Quality Promotion, National Center for Emerging and Zoonotic Infectious Diseases at the CDC, and the health care and worker safety team lead for the CDC’s Ebola response. "So I think it is really important to elicit travel history during the triage process. Find out if, in the last 21 days, the patient has traveled to one of the affected areas. That can be critical to identifying a case."

Kuhar adds that it is also important for health care personnel to realize that they need to ask more questions about symptoms and potential contacts with others who may have contracted EVD. Answers to these questions can prompt medical personnel to rapidly place patients under isolation precautions until testing rules out an EVD diagnosis.

Many of the symptoms of EVD are also typical of other infectious diseases. The CDC notes that these generally include fever, severe headache, muscle pain, weakness, diarrhea, and vomiting. Patients may also report stomach pain and a lack of appetite. And some patients may develop a rash that is usually on their face, neck, trunk, or arms. Experts say symptoms of EVD typically begin 8 to 10 days after exposure.

There is no question that another reason why EVD is getting added attention in the United States is because for the first time, patients have actually been treated for the condition here. Kent Brantly, MD, and Nancy Writebol, both missionaries who were infected with EVD while working in Liberia, were evacuated from the country in early August through the use of a plane that was equipped with an isolation tent. In separate flights, the patients were transported to Emory University Hospital in Atlanta, GA, where they were placed in a specialized isolation unit.

Both patients have since recovered from the disease. However, the extreme precautions that were taken with these patients have prompted some hospitals to question whether the CDC’s standard recommendations for infection control go far enough toward protecting frontline providers against the risk of contracting EVD. As millions viewed the arrival of these patients on television, both the patients and the health care workers assisting them were completely covered in high-tech clothing. Given the way these cases were handled at Emory, other hospitals are considering the purchase of such equipment for their own emergency personnel.

"Our message is that, at a minimum, we expect health care workers to wear a gown, gloves, eye protection, and a face mask," says Kuhar. "But we are really trying to emphasize that [hospitals] should consider additional equipment, especially in certain situations such as when there is a lot of body fluids in the patient environment."

In such instances, health care workers will need to protect their shoes and their legs as well, notes Kuhar. "While we are not too prescriptive on exactly what brand of equipment hospitals need to purchase, or whether they need to obtain multi-piece or a single-piece [protective clothing] to cover the lower or upper body, the emphasis here is on insuring that health care workers don’t come into contact with blood or other body fluids," he explains.

As the medical director for Atlanta Fire Rescue, a department that covers operations in the city as well as at Hartsfield-Jackson Atlanta International Airport, James Augustine, MD, has been working to ensure that personnel are prepared to deal with a suspected EVD case. "Since we have outbreaks across the planet, our personnel have to be prepared to deal with them," he explains. "We have a quarantine station at the airport that is an office of the CDC and we work carefully with the CDC when international patients come in."

Augustine, who is also the director of clinical operations for EMP Management in Canton, OH, observes that infection control procedures have been evolving since the SARS (severe acute respiratory syndrome) epidemic in 2004, and the strengthened procedures should serve EDs during the current outbreak as well. "Whenever patients are greeted into the ED, whether they are coming by ambulance or they walk in the door, staff need to question them about whether they are a risk for any infectious diseases that are of particular concern, including TB [tuberculosis], MERS [Middle East Respiratory Syndrome], or Ebola," he explains.

In a case in which an infectious disease is suspected, both the patient and providers need to be masked, and a special negative pressure room must be prepared where the patient can be isolated, says Augustine. However, that doesn’t mean that hospitals shouldn’t take extra precautions.

"What we have seen in the media are very high-level precautions against Ebola," he says. "We are aware that at this point in the outbreak of Ebola that we are not positive about the way it is transmitted, so it is appropriate for emergency providers, including physicians and nurses, to take what they feel are necessary precautions. And these may extend beyond what the CDC currently recommends."

Hospitals that decide to equip their emergency staff with added protective clothing or equipment should also understand that there may be added risks of exposure associated with such gear if it is not handled appropriately. The CDC has published guidance on the specific sequence of steps that should be followed when putting on and removing protective equipment. (See p. 112.)

While Brantly and Writebol are the first patients to be treated for EVD in this country, they did not contract the disease here. Nonetheless, with a quickly spreading epidemic and a constant flow of international travel to the United States, frontline personnel need to be ready to handle a suspected case. And there is ample evidence that hospitals are stepping up their surveillance efforts.

By the end of August, the CDC had received reports of dozens of suspected EVD cases from hospitals in 27 states. Fifty-eight of these cases were ruled out after hospital officials spoke with the CDC about the specifics of the suspected exposures and the patient symptoms. However, blood samples from 10 patients were forwarded to the CDC for testing. At press time, seven of these tests had come back negative for EVD, and the results for the remaining three were not yet available.

Hospitals can anticipate further EVD-related guidance from the CDC in the coming weeks, advises Kuhar. This will include recommendations that will home in on cleaning, the handling of laundry, and procedures for dealing with waste. There will also be statements coming out that deal with the safe handling of human remains that are infected with EVD. "We have to be ready," he says.

To stay abreast of updates on the outbreak and to access key information links for health care providers, visit the CDC’s centralized web resource on EVD at http://www.cdc.gov/vhf/ebola/. n 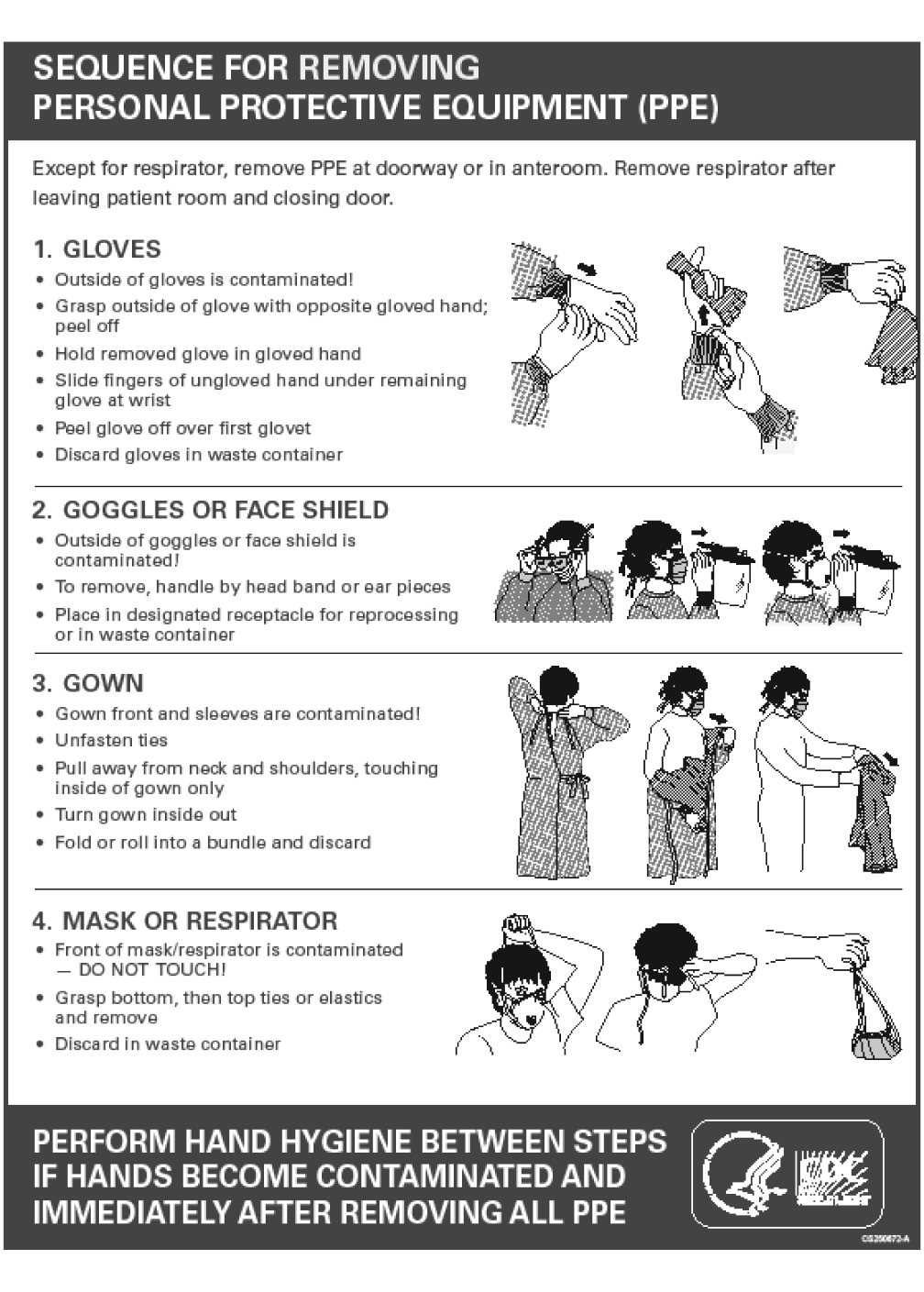 Researchers: Consider malnutrition in older adults who present to the ED