Apnea is the cessation of airflow for at least 20 seconds or for any duration if central cyanosis is present.1 The primary risk factor is prematurity. There are three types of apnea:

Table.  Causes of Apnea in the Newborn

An infant presenting to the ED with a history of apnea should be placed on a cardiopulmonary monitor. Testing includes bedside glucose for hypoglycemia, electrolytes for hyponatremia, CBC for anemia, EKG for arrhythmias, and chest X-ray for pneumonia, congenital malformations, or pneumothorax. CT of the head is indicated if head trauma or intracranial process such as hydrocephalus is suspected. Viral respiratory antigen and pertussis testing may be indicated when there is a history of a cough. If sepsis is suspected, a full sepsis workup is indicated with blood, urine, and CSF analysis and cultures. Maternal history of herpes infection, vesicular skin lesions, or seizures warrants viral cultures of lesions and CSF. Management. The infant who is apneic in the ED requires immediate stimulation and resuscitation with bag valve mask oxygenation and possible intubation if it is prolonged or recurrent. A heart rate < 60 bpm prompts the initiation of cardiopulmonary resuscitation. The overview of treatment of respiratory emergencies is discussed in this section. Admission for monitoring and further diagnostic testing is indicated for an infant who presents with apnea.

An infant presents to the emergency department via EMS. There is a history from the caretaker that the infant stopped breathing. The diagnosis of apnea may be made based on which of the following?

Sudden unexpected infant death (SUID) refers to all unexpected infant deaths and includes deaths due to sudden infant death syndrome (SIDS). SIDS is defined as the sudden death of an infant under 1 year of age, which remains unexplained after a detailed investigation of the case. SIDS is the leading cause of death in infants 1 month to 1 year of age in the United States. Explained causes of sudden infant death elicited by the medical examiner include child abuse, suffocation, and metabolic diseases. Death scene investigation, clinical history, and medical examiner findings are utilized to determine the cause of death.

An infant presents to the ED via EMS. The mother found the patient unresponsive in the crib. True statements regarding Sudden Infant Death Syndrome (SIDS) include:

An apparent life-threatening event (ALTE) is an acute change in an infant’s appearance, breathing, or behavior that is frightening to the caregiver. ALTE is a term established at a consensus conference in 1986.1,2 It includes one or all of the following features:

Observation for cardiorespiratory monitoring is usually beneficial for an infant presenting with an ALTE and any of the following:

On admission, further testing often includes evaluation for gastroesophageal reflux disease (GERD), child abuse, seizure, metabolic disorders, cardiac disease, or use of over-the-counter or other drugs. Recommendations prior to discharge from inpatient hospitalization include CPR training for the parents and education regarding maintaining a safe home environment such as supine sleeping position and avoiding tobacco exposure. The use of home apnea monitoring is controversial but oftentimes considered, especially in children with a history of prematurity or cardiopulmonary disease. The risk of subsequent death in infants with ALTE is less than 1 %.

EMS transports a patient to the Emergency department. The mother stated that the infant stopped breathing for a few seconds and became limp and pale. The diagnosis of an acute life-threatening event (ALTE) is considered. Which of the following are included in the definition of ALTE?

Pneumonia, an infection and inflammation of the lungs, may be caused by bacterial, viral or, atypical organisms.

The infant may present with cough, tachypnea, respiratory distress, hypoxia, apnea, hyper- or hypothermia, and wheezing. Associated findings are poor feeding and irritability. A chest X-ray may reveal opacification, periihilar infiltrates, air bronchograms, or pneumatocoeles. Staphylococcal infiltrates may appear as a” round pneumonia” and have associated pleural effusions and pneumatocoeles.3 (See Figures: Round Pneumonia from S. pneumonia and Pneumonia) Blood culture may isolate the offending organism, but are not routinely recommended. Complete blood count may reveal increased white blood cell count with a predominance of neutrophils in bacterial infections, or decreased WBC and predominance of lymphocytes in viral pneumonias. A respiratory panel PCR test, usually including adenovirus, coronaviruses, influenza A and B viruses, metapneumovirus, parainfluenza virus, respiratory syncytial virus (RSV), rhinovirus, Bordatella pertussis, Chlamydia pneumonia, and Mycoplasma pneumonia. may reveal the offending organism.

Figure: Round Pneumonia from S. pneumonia 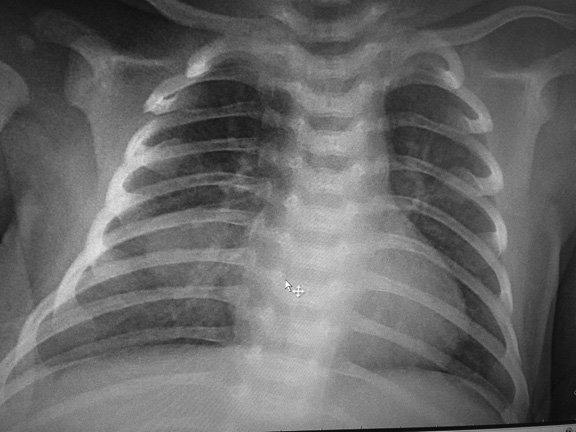 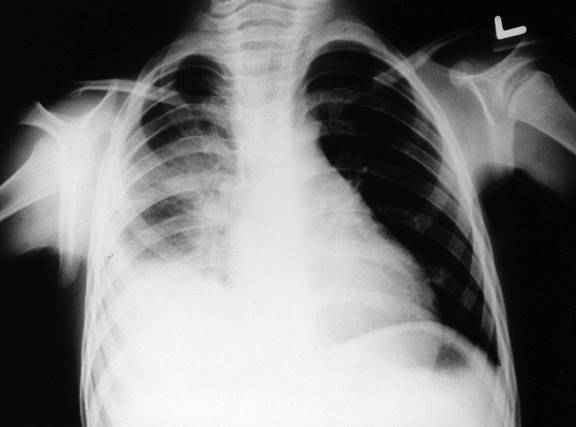 Chlamydial pneumonia occurs in 5-30% of infected neonates with about 50% of these neonates having a history of conjunctivitis. In general, the infants present between 4-12 weeks of age afebrile with a staccato cough, nasal congestion, and tachypnea. The CBC is typically normal with an eosinophilia. Chest X-ray shows hyperinflation with bilateral, symmetrical interstitial infiltrates.

The management of pneumonia includes oxygen supplementation for hypoxia. The Infectious Diseases Society of America recommends narrow-spectrum antibiotics for uncomplicated bacterial pneumonia in otherwise healthy children. Choices include ampicillin, penicillin, and amoxicillin. In children older than 5 years, a macrolide (azithromycin) should be added for atypical coverage. A third-generation cephalosporin such as cefotaxime may be considerd for serious, life-threatening illnesses and in children with significant comorbidities. Vancomycin or clindamycin (depending on local susceptibilities) should be added if MRSA infection is suspected. Erythromycin is recommended for C. pneumonia and azithromycin should be administered if pertussis is suspected or confirmed.

Admission is recommended in the neonatal group due to risk of sepsis, apnea, poor feeding, hypoxia, and increased work of breathing.

A 4-week-old infant presents with fever, tachypnea, and a right upper lobe infiltrate on chest X-ray. Which of the following statements is true regarding the management of neonatal pneumonia?

Round Pneumonia from Staphylococcal aureus 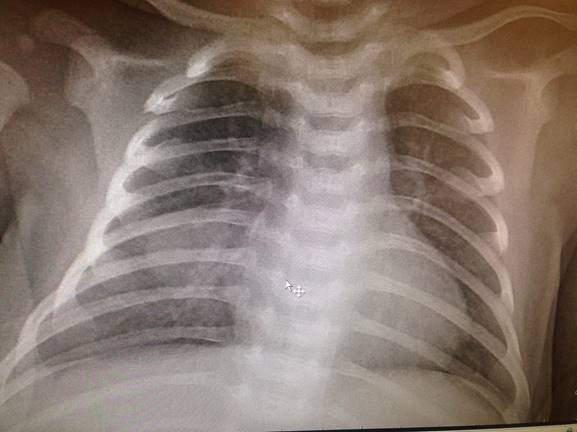 Pertussis is a pulmonary infection caused by an aerobic bacteria, B. pertussis. Most of the morbidity and mortality associated with pertussis is limited to very young infants; infants < 2 months of age have a case fatality rate of approximately 1%, and infants aged 2-11 months have a fatality rate of 0.5%.

The clinical features vary with age, immunization status, and the presence of comorbid conditions. There are three main stages: the catarrhal, paroxysmal, and convalescent stages. It is most contagious in the catarrhal stage when the symptoms are those of an upper respiratory infection. The paroxysmal stage presents with repeated “fits” of coughing followed by an inspiratory “whoop” in some individuals. The paroxysmal stage may last 2-6 weeks. During the convalescent stage there is clinical improvement. The presentation may be atypical in very young infants, who are usually unimmunized or only partially immunized. These infants often lack the paroxysmal cough or whoop, and may present with gagging, gasping, ALTEs, or seizures. Other factors that increase the risk of complications include history of prematurity and existing cardiac, pulmonary, neurologic, or muscular diseases.

Maintaining a high suspicion for pertussis is very important. Historical clues to the diagnosis may include a prolonged cough, paroxysms of cough, post-tussive emesis, and contact with a person with a prolonged cough. Signs and symptoms include feeding intolerance, emesis, dehydration, breathing difficulties, cyanosis, and apnea. Examination of the infant may reveal tachypnea, respiratory distress, abnormal lung sounds, and cyanosis.

The diagnosis is confirmed with a positive culture or PCR for B. pertussis. The chest X-ray may be normal or may reveal peribronchial cuffing, interstitial edema, atelectasis, or a perihilar opacity with a “shaggy” right heart border. A CBC may be normal or may demonstrate leukocytosis (white blood cell count ranging from 15,000-100,000) with an absolute lymphocytosis. Infants with leukocytosis have a worse prognosis.

The use of culture and PCR is of greatest utility in the first 3 weeks of cough symptoms. The organism has fastidious growth requirements, and the sensitivity of cultures is between 15-45%. A negative culture does not exclude pertussis. The sensitivity of diagnostic testing decreases after 3 weeks of cough if the child has been treated with antibiotics and if the child has previously been immunized. The specificity for culture is 100%. PCR has a sensitivity of 70-99% with a specificity of 86-100%. There are false positives due to DNA contamination. Some recommend culture and PCR testing in suspected cases.

The American Academy of Pediatrics recommends azithromycin (10 mg/kg/dose x 5 days), rather than erythromycin for the treatment of pertussis in infants. This is due to the potential association of the latter with infantile hypertrophic pyloric stenosis. Treatment is recommended prior to culture or PCR reports in infants suspected of having the infection. Treatment during the early (catarrhal) phase decreases the duration of symptoms. Initiating treatment later in the disease course probably does not shorten the duration of symptoms but may decrease spread of the disease.

Infants under 3 months should be admitted to the hospital for cardiopulmonary monitoring. Infants between 3-6 months may be admitted if ill-appearing or with significant comorbidities. Supportive care, including IV fluids, a nasogastric feeding tube for hydration, and supplemental oxygen for hypoxias, is the mainstay of management. The infant should be placed on droplet precautions.4

Prophylaxis is recommended for all close contacts of the index case, including household and childcare contacts regardless of immunization status, especially for those who have immunodeficiency or heart or lung disease.5

A 1-month-old infant presents with a cough for 2 weeks. The siblings are not immunized and have had cough and upper respiratory symptoms for about 6 weeks. You suspect pertussis. True statements regarding pertussis are: