BIRMINGHAM, AL – Severe sore throat in young adults may look like strep throat but, more often than you may suspect, it is something else altogether. And that could be dangerous.

In the study involving 312 college students at UAB's Student Health Clinic, F. necrophorum was detected in more than 20% of patients with sore-throat symptoms, against with 10% for Group A strep and 9% for Group C or G strep.

"This is the first study in the United States that shows that F. necrophorum causes a significant number of cases of pharyngitis in this young adult population," said lead author Robert M. Centor, MD, professor in the Division of General Internal Medicine in the UAB School of Medicine and the study's lead author. "It is also the first to show that F. necrophorum pharyngitis and streptococcus pharyngitis share similar clinical signs. This study bolsters our understanding that this condition is common in the U.S. and very closely resembles strep throat."

F. necrophorumpharyngitis also is the leading cause of a rare but potentially very dangerous condition known as the Lemierre's syndrome, cautions Centor. The syndrome, which mostly affects adolescents and young adults and is rare in children, often causes long, complex hospitalizations requiring intensive care. In fact, 6% of Lemierre's syndrome patients die.

The syndrome begins with a sore throat, followed by an infected jugular vein after four to five days, according to the report. It also can lead to abscesses in other parts of the body.

More common and deadly prior to the advent of penicillin, Lemierre’s was nearly wiped out by routine antibiotic use. Now that antibiotics are used less often because of resistance fears, the disease has been making a comeback over the last decade.

He argued that F. necrophorum requires the same aggressive diagnosis and treatment at Group A strep, which can cause rheumatic fever, although the lack of rapid test makes it harder to recognize.

"We suspect that many physicians would prescribe antibiotics for patients with F. necrophorum pharyngitis if there were a point-of-care diagnostic test that proved its presence,” Centor said.

Without such a test, he suggested that antibiotics be prescribed to patients who have clinical symptoms and score high on the Centor Score, which measures the likelihood of a bacterial cause of sore throat and is named for him. 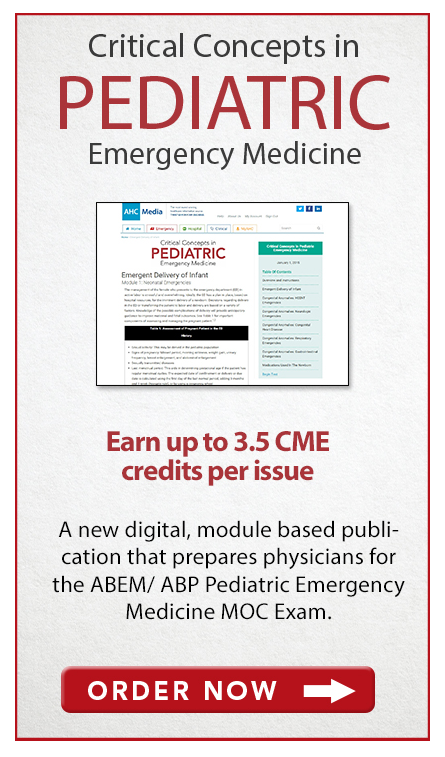 ATLANTA – Despite lengthy debate on whether the government’s carrot and stick approach to electronic health record (EHR) adoption has worked, a new report demonstrates that the number of emergency department using EHRs nearly doubled in the five year period from 2006 to 2011.

In 2011, 84% of EDs used some type of EHR system, up from 46% in 2006, according to a National Center for Health Statistics Data Brief made available by the Centers for Disease Control and Prevention.

From 2007 through 2011, the percentage of hospitals reporting having an EHR system that met the government criteria for a basic system increased among EDs from 19% to 54%.A basic system is defined as one that has the following functionalities: patient history and demographics, patient problem lists, physician clinical notes, comprehensive list of patients’ medications and allergies, computerized orders for prescriptions, and ability to view laboratory and imaging results electronically.

The policy brief notes that the HITECH Act of 2009 gave hospitals monetary incentives to adopt EHR systems if they met federal standards of “meaningful use” of EHRs in three stages. By2011, 14% of EDs had EHR technology able to support nine Stage 1 Meaningful Use objectives.

Over the 5-year period, EDs with an EHR system able to support Stage 1 objectives increased for these four objectives:

In 2011, EDs with an EHR system able to support Stage 1 Meaningful Use objectives ranged from 40% (providing reminders for guideline-based interventions) to 87% (recording patient demographics).

Study authors note that their review is limited because to receive Meaningful Use incentive payments, hospitals have to meet 14 core set objectives and 5 of 10 menu set objectives. NHAMCS only measures 9 of 14 objectives, according to this report.

The increased use of EHRs notwithstanding, the Centers for Medicare & Medicare Services announced late last year that about 200 hospitals began receiving penalties for failing to meet meaningful use standards for EHRs as of Oct. 1, 2014.

STOCKHOLM, SWEDEN – Administering the anticoagulant fondaparinux was linked with a lower risk of major bleeding events and death -- both in the hospital and after six months – in patients with non-ST-segment elevation myocardial infarction (NSTEMI) compared to use of low-molecular-weight heparin (LMWH).

Both groups had similar rates of subsequent heart attack or stroke, however, according to a new study published in the Journal of the American Medical Association.

The study, which notes that bleeding events in antithrombotic therapy can lead to increased mortality, finds that fondaparinux, marketed as Arixtra, was associated with reduced major bleeding events and improved survival compared to LMWH.

The randomized trial, led by researchers from the Karolinska Institutet in Stockholm, was conducted because large-scale reports on the use of fondaparinux vs. LMWH outside of a clinical trial setting were lacking, study authors note.

For the trial, researchers analyzed data from a Swedish registry that included 40,616 patients with NSTEMI who received in-hospital treatment with fondaparinux or LMWH between September 2006 and June 2010, with follow-up through December 2010.

With the group divided between those who received fondaparinux (36.4%) and LMVH (63.6%), the absolute rate of severe in-hospital bleeding events was found to be lower in the fondaparinux group than the LMWH group – 1.1% vs 1.8%. In-hospital mortality also was lower at 2.7% vs. 4% for the LMVH segment.

Little difference in major bleeding events and mortality was detected between the two treatments at 30 and 180 days, the authors point out. The rate of recurrent heart attack in the fondaparinux group was 9% vs. 9.5% in the LMWH group at 30 days and was 14.2% vs. 15.8% at 180 days. Strokes were uncommon in either group.

The results held up even with patients with varying degrees of kidney function and in a subgroup of patients with NSTEMI who had undergone early percutaneous coronary intervention.

"A randomized clinical trial is often needed to provide definite evidence and an estimate of the treatment effect in a specific, selected, well-defined target patient population. However, the effect of implementing the same treatment in clinical practice might differ and should therefore be investigated in observational cohorts and, preferably, in continuous registries with complete coverage of non-selected patients with an indication for the studied treatment,” the authors suggest.

They note that, outside of a trial setting, treatment is given to a much more heterogeneous patient population, and there is less selection of treatment centers and physicians. “Thus, the balance between benefit and risk can differ between a randomized clinical trial and experience in a non-trial, routine clinical care setting. Therefore, experiences from clinical practice provide important complementary information," the study concludes.

LOS ANGELES – Traumatic injuries, even relatively mild ones such as rib fractures, are much more complicated when they involve elderly patients, with the potential for pneumonia, higher complexity pain management and mobility issues, according to a new study.

Bringing in a geriatrician to consult can not only improve in-hospital care but assure better functioning when the patients return home, according to an article in press published online by the Journal of the American College of Surgeons. The reportwill appear in a print issue this spring.

"Trauma teams are generally good at making sure a range of specialists get involved like neurologists and orthopedists, but typically there is no geriatrician involved," explained the study's lead author Lillian Min, MD, MSHS, assistant professor of geriatric and palliative medicine at the University of Michigan Health System.

To examine whether involving geriatric specialists early on could improve outcomes for older adult trauma patients, the researchers offered routine geriatric consultations to 76 patients over age 65 who were admitted to UCLA for trauma care for longer than 24 hours between December 2007 and November 2009. Patients' previous level of functioning, family support, financial challenges, mobility and cognition were assessed in a collaborative effort involving geriatric medicine specialists and the trauma surgery team.

Patients in the intervention group were compared to a group of 71 similar patients who were admitted to the hospital the year before, from December 2006 to November 2007, and were not routinely offered geriatric consultation. Using medical records, they calculated detailed quality-of-care scores based on 33 indicators that measured how well the medical team provided care for the older patients in such areas as cognition, mobility and functional status.

"If someone's grandmother was admitted for trauma care after a fall, the quality indicators reflect whether the team asked about her functional status before the fall," Min explained. "Was she running up the stairs with a full load of laundry or was she already frail and struggling with mobility? Those are two different levels of functionality. We think that knowing this information is crucial to determining the patients' hospital course, recovery, and how well the team can make a safe discharge plan."

In addition, the consultations improved care for cognition and delirium by 8.4 percentage points.

"This study is just a start, but the take-home message is that by involving geriatric consultations early on, we could detect that overall care was better," Min said.

JOIN US IN LAS VEGAS FOR THE FIRST EVER

Early-bird registration is now open - save $200 by signing up now!