LOS ANGELES – When emergency physicians order advanced imaging, they may suspect the study is medically unnecessary some of the time but are motivated by fear of missing a diagnosis or being sued, according to a new study.

The report, published recently in the journal Academic Emergency Medicine, points out, “Over-ordering of advanced imaging may be a systemic problem, as many [emergency physicians] believe a substantial proportion of such studies, including some they personally order, are medically unnecessary.”

Solving the problem, according to the study led by researchers from the Robert Wood Johnson Foundation Clinical Scholars Program, the Los Angeles Veterans Affairs Healthcare System and the University of California Los Angeles, will require dealing with “multiple complex factors” that “must be addressed simultaneously to curb over-imaging.”

In initiating the study, researchers sought to determine emergency physician (EP) perceptions regarding the extent to which they order medically unnecessary advanced diagnostic imaging, factors that contribute to the behavior, and proposed solutions for curbing the practice.

As part of a larger study to engage physicians in the delivery of high-value health care, the study team conducted two focus groups to explore the topic of decision-making around resource utilization and then used qualitative analysis to generate survey questions. The survey, which was extensively pilot-tested, focused on advanced diagnostic imaging, i.e., computed tomography [CT] or magnetic resonance imaging [MRI].

With 478 emergency physicians approached, 435 (91%) completed the survey – 68% of the respondents were board-certified, and roughly half worked in academic emergency departments.

More than 85% of respondents said they believe too many diagnostic tests are ordered in their own EDs, and 97% said at least some – an average of 22% – of the advanced imaging studies they personally order are medically unnecessary.

“The main perceived contributors were fear of missing a low-probability diagnosis and fear of litigation,” according to the authors.

“Extremely” or “very” helpful possible solutions, according to survey respondents, include: 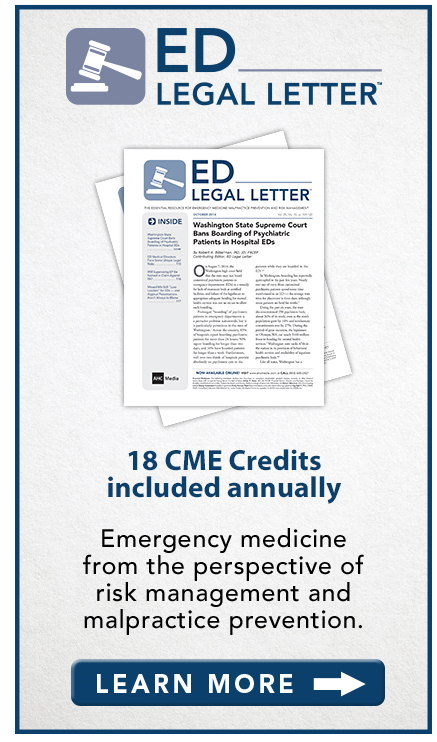 DURHAM, NC – When you release a patient with a kidney stone from your emergency department, there is a one in nine chance he or she will be back, according to a new study.

There also may be something you can do about those revisits.

The study authors, led by Duke University researchers, suggest that the results could help physicians improve care for the condition, which can be both painful and costly.

“This is the first study that has looked at what happens to a large group of patients after they leave the emergency department,” said lead author Charles Scales, MD, assistant professor of surgery at Duke University School of Medicine. “Prior work in this area has really only looked at the processes of care during an emergency department visit, but not outcomes after patients go home.”

Background information in the article notes that more than a million people visit EDs annually because of kidney stones and the number is rising.

“The prevalence of kidney stones has nearly doubled in the past 15 years,” Scales pointed out. “This is likely related to the increasing obesity rates in the U.S. population and the diet and lifestyle of Americans today.”

For the retrospective study, researchers looked at medical records of all patients in California initially treated and released from EDs for kidney stones between February 2008 and November 2009. The primary outcome was a second ED visit within 30 days of the initial discharge from emergent care.

Results indicate that, among 128,564 patients discharged from EDs, 13,684 (11%) had at least one additional emergency visit for treatment of their kidney stone. Among those patients, nearly one in three required hospitalization or an urgent temporizing procedure at the second visit.

The study finds that being on Medicaid vs. having private insurance increased the risk of an ED visit. Greater access to urologic care, meanwhile, was associated with lower odds. Performance of a complete blood count also was associated with a decreased risk of a revisit, the authors point out.

Symptoms that led patients to return to the ED included uncontrolled pain, severe vomiting leading to dehydration, or infections that coincide with kidney stones.

The researchers also examined whether the care patients received was associated with the risk of revisits. Patients who received lab testing to assess for systemic infection were less likely to return to the emergency department.

“Although requiring further investigation, this finding suggests that the quality of care at that first visit may influence the risk of a second emergency department visit,” Scales said.

“Overall, our aim is to find ways to improve care for patients facing the excruciating pain of passing a kidney stone," he added. "One solution may be better coordination between primary care and urology to treat patients so they do not have to seek care in a high-expense, high-acuity setting like the emergency department.”

SALT LAKE CITY – Use of an advanced clinical decision tool potentially could reduce mortality for the 1.1 million patients treated for pneumonia in the United States each year.

That’s according to a new study, published recently in Annals of Emergency Medicine.

Researchers from Intermountain Medical Center in Salt Lake City report that a tool they developed saved up to 12 lives in hospitals where it was used, compared to routine care standards. Currently, more than 50,000 Americans die each year from pneumonia.

According to the report, the advanced computer program combines a patient's personal medical information and risk factors in real time to alert emergency department physicians to the possibility of a pneumonia diagnosis.

Once pneumonia is confirmed by the physician, the tool automatically provides a calculated severity assessment as well as management recommendations, which include diagnostic testing and antibiotic selection, based on current North American pneumonia treatment guidelines.

In the prospective, controlled trial in seven Intermountain Healthcare hospital EDs in urban areas in Utah, the researchers looked at patients diagnosed with pneumonia from December 2009 through November 2010, prior to introduction of the tool, and December 2011 through November 2012, after the tool was deployed.

The study compared 30-day, all-cause mortality adjusted for illness severity at the four intervention EDs, which began using the tool in May 2011, to three EDs providing usual care.

Of 4,758 ED pneumonia patients, 14% of whom had healthcare-associated pneumonia, median age was 58, 53% were female and 59% were admitted to the hospital.

With the tool used in 62.6% of intervention ED study patients, no difference was detected in severity-adjusted mortality between intervention and usual care EDs’ post–tool deployment. Post hoc analysis, however, indicated that patients with community-acquired pneumonia experienced significantly lower mortality, whereas mortality was unchanged among patients with healthcare–associated pneumonia. Tool recommendations were followed more by patients discharged from EDs post-deployment, according to the researchers.

"This tool doesn't take over for doctors, but it does assemble the needed information, calculates the patients' severity of illness and likelihood of infection with resistant bacteria, and presents recommendations to help doctors make better decisions,” Dean said. “It's all about giving local doctors tools to be more consistent, objective, and focused on best practices."

Join us for a 2-day interactive seminar on August 28-29 at the Encore Hotel, Las Vegas. This year’s Summit focuses on key issues emergency medicine providers are facing a daily basis. The agenda topics were selected based on survey responses from 1500 emergency medicine physicians from across the US. Hot topics include New Diagnostic Modalities in Managing Chest Pain, Metabolic Nightmares in ER Practices, Angioedema: What's New?, Advanced Techniques in Ultrasound, Secrets of the Abdominal CT Masters and much more!

Early-bird registration is still open - save $200 by signing up now!
reliasmedia.com/emr-summit-2015

Further discounted rates available for groups of five or more
Call us at 800.688.2421 or email us to learn more