Dr. Tromble and Dr. Leetch report no financial relationships relevant to this field of study.

Respiratory failure is the most common cause of cardiac arrest in children. Failure occurs when the respiratory system is unable to exchange gases in order to meet the body’s metabolic need. This may involve a failure of oxygen exchange (PaO2 <60mmHg), a failure of carbon dioxide exchange (acutely, PaCO2 > 50 mmHg; chronically, 20 mmHg above baseline), or both. The underlying etiology may occur within one or multiple organ systems that participate in the process of respiration. These include the nervous, cardiovascular, musculoskeletal, and respiratory systems.

This failure can be due to a variety of reasons, including airway obstruction, CNS issues, parenchymal disease, and respiratory pump failure. Younger children have smaller airway diameters that are more easily obstructed. This, combined with an underdeveloped respiratory pump, can quickly cause a lower respiratory tract infection to progress to respiratory failure. Neonates and preterm infants are especially prone to manifest illness with apnea due to an underdeveloped central nervous system. As children grow older, airway size and chest wall compliance are improved, and the progression to respiratory failure is more common in those with parenchymal disease or chronic airway disease (e.g., asthma).

A 4-month-old female is brought to the emergency department in respiratory distress. She is febrile with a temperature of 38.3 C and is found to have nasal flaring, tachypnea, intercostal retractions, and diffuse bilateral rales with end-expiratory wheezing. Her oxygen saturation is 88% on room air. She is ultimately admitted for supportive care and tests positive for human metapneumovirus. What features make this patient more likely to develop respiratory distress than an older child?

The signs and symptoms of respiratory distress and impending respiratory failure can be subtle in the pediatric patient and are dependent on the underlying etiology. The Pediatric Assessment Triangle(PAT) is a bedside tool that assists with rapid identification of children with respiratory distress and failure. Careful attention should be paid to the work of breathing and respiratory rate. Nasal flaring, retractions, abdominal breathing, and grunting are signs of significant increased work of breathing. Tachypnea is often an early sign whereas bradypnea is an ominous late finding. Hypercarbia often results in an increased respiratory rate and tidal volume to increase minute ventilation (Minute Ventilation = Respiratory Rate x Tidal volume).The normal response to hypoxia is also an increase in respiratory rate and tidal volume to allow for more alveolar gas exchange. A distinguishing clinical feature is the progression of hypoxia to agitation (“air hunger”) and hypercarbia to somnolence (“CO2 narcosis”).

Figure 1: An Infant with Intercostal Retractions 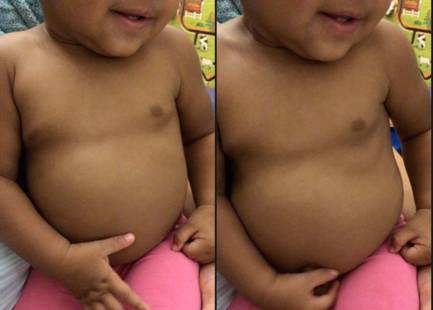 Figure 2: An Infant with a Left Pneumothorax 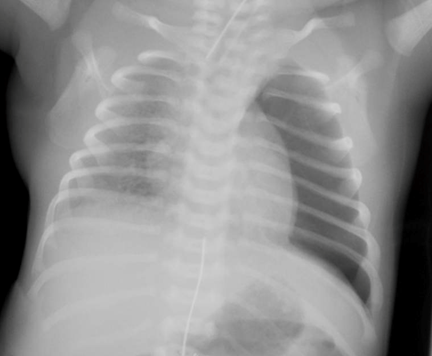 A 6-month-old male with no prior medical history presents to the emergency department with a chief complaint of “difficulty breathing.” Vital signs include a temperature of 39.2 C, pulse 180, oxygen saturation of 80% in room air, and respiratory rate of 60. Initial exam reveals an irritable infant who is poorly consolable, with intercostal retractions, nasal flaring, and diffuse rales throughout the bilateral lung fields. Initial management includes establishing IV access and placing the patient on a non-rebreather at 15L, after which his oxygen saturation is 85% and respiratory rate is 53. Of the following, what information would confirm respiratory failure?

Early recognition of impending respiratory failure and identification of the underlying cause are critical to the management of respiratory distress and failure. In an undifferentiated patient with respiratory distress, management begins with assessment and intervention, according to the American Heart Association Guidelines for Pediatric Advanced Life Support (PALS). Airway assessment and positioning to relieve obstruction is followed by assessment of work of breathing. Supplemental oxygen therapy is the first step in management of hypoxemia. Non-invasive modalities may range from simple nasal cannula to the use of positive pressure ventilation.

Obstructive processes of both the upper and lower airways may benefit from nebulized medications including albuterol, racemic epinephrine, and hypertonic saline. Heliox, a mixture of helium and oxygen, may also be beneficial for severe upper airway obstructions but is not first-line therapy. Systemic steroids should be used early in cases of dynamic upper and lower airway obstruction. When airway obstruction is caused by nasopharyneal soft tissue or the tongue, placement of a nasopharyngeal or oropharyngeal airway device may be helpful. If the respiratory distress is due to medication ingestion, any available antidote should be administered promptly (e.g., naloxone for opiate intoxication).

Endotracheal intubation with mechanical ventilation is indicated for severe respiratory distress/failure refractory to other therapies and interventions. Respiratory failure is often evidenced by:

Preparation for intubation should begin with pre-oxygentation with 100% oxygen until emergency providers are ready to place an advanced airway. Oxygen may be delivered by non-rebreather mask, bag-valve-mask ventilation, or other advanced positive pressure ventilatory techniques. Failure to successfully intubate or ventilate a patient in respiratory failure is an indication for surgical cricothyroidotomy (age ≥ 12 years) or needle cricothyroidotomy with jet ventilation (age < 12 years). Additional adjunct therapies include inhaled nitric oxide, surfactant, and initiation of ECMO.