Moral Distress When Caring for Patients on Mechanical Circulatory Support

The Tactics and Tools to Manage Pediatric Heart Failure

Dr. Tromble and Dr. Leetch report no financial relationships relevant to this field of study.

Cardiogenic failure or shock encompasses a wide array of processes that result in insufficient oxygen and nutrient supply to meet the body’s metabolic needs. Shock is defined as insufficient delivery of oxygen or nutrients to tissues. If uncorrected, this state leads to development of anaerobic metabolism,lactate production, metabolic acidosis, and, ultimately, multisystem organ failure and death. Respiratory failure is the most common cause of cardiogenic failure and arrest in children. Other etiologies include sepsis, metabolic derangements, trauma, and intrinsic cardiac disease.

Shock ultimately develops with either impairment of cardiac output (CO), systemic vascular resistance (SVR), or both.

There are several categories of shock, which include the following:

Pediatric shock is a unique entity, distinct from that of adults, and must be evaluated with attention to the qualities that make pediatric shock.

A 14-year-old boy was the unhelmeted driver of an ATV involved in a collision. The patient was separated 30 feet from the vehicle and found unresponsive on the scene. On arrival to the emergency department, the patient has obvious signs of trauma to the head and face and a heart rate of 166 with a blood pressure of 73/42. What is the most likely explanation for the patient’s vital sign abnormalities?

Shock can be challenging to identify in the pediatric patient. Clinical signs are often subtle and may be limited to tachycardia in the early compensated phase.Careful attention to appearance, work of breathing and color may identify early clues. (See Table 3.) Irritability, lethargy, and fluctuations in mental status may indicate poor perfusion. Increased respiratory effort may be due to respiratory distress or due to increased metabolic demand. End-organ perfusion can be assessed in the form of capillary refill (skin), urine output (kidneys), mental status (CNS), and heart rate (cardiac). In the setting of a normal blood pressure, poor perfusion indicates compensated shock, which may quickly progress into decompensated shock without intervention. Hypotension is generally a late, and often ominous, finding.

Figure: A Child with Mottling and Poor Perfusion 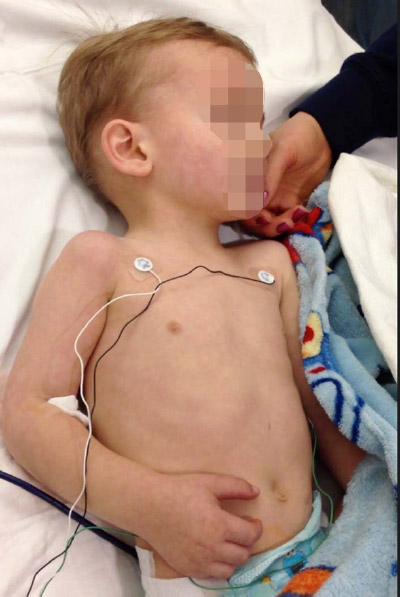 Laboratory data should be obtained and interpreted in the context of the patient at hand. Arterial or venous blood gas analysis and serum lactate measurement may reveal a metabolic acidosis secondary to hypoxemia and anaerobic metabolism. CBC, comprehensive metabolic profile (CMP), blood glucose level, and coagulation studies may be non-specific but should be interpreted in the context of the clinical picture. Blood and fluid cultures should be obtained, if an infectious etiology is suspected.

Early recognition and aggressive intervention is essential and should be in accordance with the American Heart Association Guidelines for Pediatric Advanced Life Support (PALS). In undifferentiated shock, intervention should include the following:

Table 5: Pre-ICU Management of Shock Based on Type

An 8-year-old male with multiple ICU admissions for asthma presents in respiratory distress with tachycardia, hypotension and an infiltrate on chest X-ray. Despite multiple 20mL/kg fluid boluses followed by initiation of dopamine and norepinephrine, he continues to be hypotensive with signs of poor perfusion. What should be the next step in management?