Dr. Pacheco and Dr. Leetch report no financial relationships relevant to this field of study.

Most commonly, infants and children sustain cardiac arrest as a result of respiratory failure. Rarely in previously healthy children is cardiac arrest due to a primary cardiac etiology. Respiratory failure leading to cardiac arrest is referred to as asphyxial arrest. Asphyxia begins with a variable period of systemic hypoxemia, hypercapnea, and acidosis that progresses to bradycardia, hypotension and, ultimately, cardiac arrest. Cardiopulmonary arrest can be thought of as the ultimate shock state, resulting in markedly impaired oxygen delivery and extraction, endothelial activation, systemic inflammation, multi-organ failure and death.

The post-cardiac arrest syndrome consists of four general processes: anoxic brain injury, post-arrest myocardial dysfunction, systemic ischemia and reperfusion injury, and persistent precipitating pathophysiology. Hypoxic ischemic encephalopathy is the most important cause of morbidity and mortality following resuscitation. Its severity is highly dependent on the duration of the n cardiac arrest as well as the quality of cardiopulmonary resuscitation (i.e., chest compressions) during resuscitative efforts.

Consider the pediatric assessment triangle (PAT) in the evaluation of children to help identify symptoms and signs that may be harbingers of cardiac arrest. (See Figure 1.) Appearance may range from normal to agitation, lethargy, or extremis. Work of Breathing may also range from normal to bradypnea and apnea or tachypnea and respiratory distress immediately prior to arrest. Ominous circulation findings, such as delayed capillary refill and mottled and cyanotic skin, are clues that cardiac output and perfusion are may be compromised and cardiac arrest may be imminent. 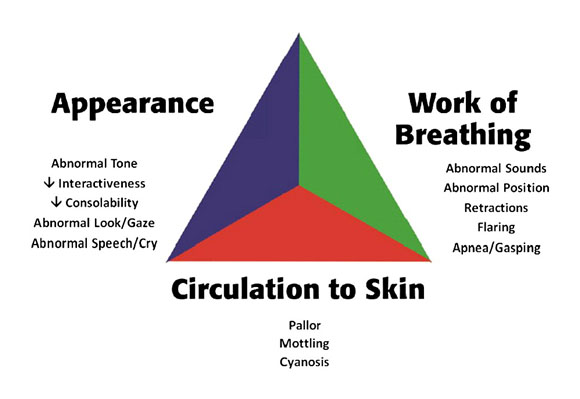 Respiratory distress, failure, and, ultimately, arrest are the most common precipitating causes of cardiac arrest in children. Any condition that compromises oxygenation and/or ventilation may lead to respiratory failure. These include respiratory or extra-pulmonary infections, upper or lower airway obstruction, tension pneumothorax, pulmonary edema, disorders of the chest wall trauma or thoracic cavity, central neurologic system (CNS) dysfunction, and metabolic, endocrine, or hematologic crises. Primary pediatric cardiac arrest is rare in otherwise healthy children and is most commonly associated with conditions such as viral myocarditis, pericarditis, dysrhythmias, and congenital heart disease. Primary myocardial infarction, the most common cause of cardiac arrest in adult populations, is rare in children.

Cardiopulmonary resuscitation focuses on the early management of airway, breathing, and circulation. Establishing and ensuring a patent airway and providing adequate oxygenation and ventilation are important for the pediatric patient, considering that respiratory failure (poor oxygenation and/or ventilation) is the most common cause of cardiac arrest in these children. However, the 2010 AHA guidelines for cardiopulmonary resuscitation recommend a Circulation-Airway-Breathing (CAB) sequence. The rationale for the CAB sequence,even in infants and children, is to simplify training with the hope that more out-of-hospital cardiac arrest victims will receive bystander CPR (i.e., compression-only CPR). In children who suffer cardiac arrest as a result of non-cardiac causes, conventional CPR (i.e., chest compressions and breaths at standard ratio) has been shown to be superior to compression-only CPR. Further, in children who sustain a cardiac cause, convention CPR is non-inferior to compression-only CPR.3 Therefore, conventional CPR is recommended for all pediatric cardiac arrest patients except when performed by basic life support (BLS) bystanders.

PEA and asystole are nonshockable rhythms. Management includes high-quality CPR, airway and respiratory support, and possible vasoactive medication administration. Chest compressions are performed at a rate of at least 100 per minute with minimal interruptions. Positive pressure ventilations are delivered initially with bag-valve-mask device during brief pauses in chest compressions. An advanced airway (endotracheal tube or laryngeal airway) may be inserted, as long as chest compressions are only briefly interrupted. Once an advanced airway is established, ventilation is delivered at a rate of 1 breath every 6 to 8 seconds (about 8 to 10 breaths per minute) without interrupting compressions. Epinephrine, 0.01 mg/kg (0.1 mL/kg of 1:10,000 solution) with a maximum of 1 mg per dose, is given every 3 to 5 minutes via the intravenous (IV) or intraosseous (IO) route or, less desirably, via the endotracheal tube (ETT). Chest compressions should be pausedevery 2 minutes in order to re-assess for signs of a perfusing or shockable (i.e., ventricular tachycardia or ventricular fibrillation).

The defined heart rate at which a child is deemed to be bradycardic dependson a child’s age. Newborns and infantstypically have higher heart rates (> 100 beats per minute [bpm]) that gradually decrease to normal adult rates (> 60 bpm) by the early teenage years. For simplicity, the American Heart Association (PALS) defines bradycardia as a heart rate < 60 bpm.

The management of bradycardia focuses primarily on identifying and treating the underlying etiology. Hypoxia is the most common cause of bradycardia in children. In the child with a heart rate < 60 bpm and signs of poor perfusion or shock, chest compressions should be initiated. Airway and respiratory support should be initiated immediately. If the child remains bradycardic, epinephrine (0.01 mg/kg, maximum single dose 1 mg) should be administered via the IV, IO, or ETT route. Atropine is reserved for arrest secondary to increased vagal tone or primary atrioventricular block. For persistent bradycardia leading to poor perfusion despite adequate pharmacologic intervention transthoracic/transvernous pacing should be considered.

Wide complex tachycardias are uncommon in children and often difficult to diagnose. Ventricular tachycardia (VT) is a series of three or more consecutive ectopic beats originating from within ventricles rather than atria of the heart. Polymorphic VT is more significant than monomorphic VT. Torsades de pointes (“twisting of the points”) is a polymorphic VT characterized by progressive changes in amplitude and polarity of the QRS complexes separated by a narrow transition QRS complex. The rate of VT is typically 120-200 bpm. Etiologies include primary electrical disease (long QTc syndrome), pulmonary hypertension, structural heart disease such as tetralogy of Fallot (TOF), and postoperative congenital heart disease. Other causes include myocarditis, Brugada syndrome, hypoxemia, arrhythmogenic right ventricular dysplasia, electrolyte imbalance (hyperkalemia), and ingestions (tricyclics, digoxin). Symptoms of ventricular tachycardia include chest pain, lethargy, syncope, hypotension, palpitations and sudden death with hemodynamic collapse.

The stable patient (i.e., no signs of poor perfusion or shock) with a wide complex tachycardia can be approached cautiously but judiciously. A brief history, including medication and family histories, may reveal the etiology of the tachyarrhythmia. A 12-lead EKG and pediatric cardiology consultation may help differentiate VT from SVT with aberrancy or other arrhythmias. PALS recommends amiodarone (5 mg/kg IV over 30-60 minutes, maximum dose 300 mg) or procainamide (15 mg/kg IV over 30-60 minutes) as first-line pharmacologic agents for stable VT. Pediatric cardiology should be consulted to aid with further management in the intensive care setting.

In the unstable patient, wide complex tachycardias are treated as VT until proven otherwise. (See Figure 2.) Inappropriately treating a wide complex tachycardia as a supraventricular tachycardia (SVT) with aberrancy may have devastating consequences. If the patient is hemodynamically compromised but has palpable pulses, synchronized cardioversion should be performed. The initial dose is 0.5 J/kg. If VT persists, the dose is increased to 1 J/kg. Untreated or refractory VT usually eventually degenerates into VF. For the VT or VF patient without palpable pulses (see Figure 3), unsynchronized cardioversion (i.e., defibrillation) starting at a dose of 2 J/kg should be performed, along with high-quality CPR. If VT/VF persists, the dose is doubled to 4 J/kg. Epinephrine (0.01 mg/kg IV or IO every 3-5 minutes) and amiodarone (5 mg/kg IV or IO bolus) are considered first-line pharmacologic agents in shock-refractory VT/VF. Magnesium sulfate (25-50 mg/kg IV or IO, maximum single dose 2 g) should be administered for torsades de pointes.

A 3-week-old female presents to the emergency department for poor feeding and lethargy. Profound tachycardia is noted with a rate of 210. The patient has poor perfusion and cries weakly as an IV is placed. Cardiorespiratory monitor shows the rhythm below. Which of the following is the next most appropriate step in management?

Post-resuscitation care should be instituted once return of spontaneous circulation is achieved to prevent secondary organ injury and preserve neurologic function. All pediatric patients who suffer cardiac arrest should be transferred to a higher level of care once stabilized. Therapeutic hypothermia (32o-34oF) may be considered for children who remain comatose after resuscitation from cardiac arrest.

Supraventricular tachycardia is a rapid rhythm originating above the ventricles as a result of either a re-entry mechanism or automaticity. It is a narrow complex tachycardia at a rate of 150-300 bpm with 1:1 AV conduction and a fixed RR interval. Atrial flutter and fibrillation are excluded from this definition. Approximately 10-20% of SVT is due to Wolff-Parkinson-White (WPW) syndrome. (See Figure 4.)

SVT is the most common significant arrhythmia in pediatric patients.The majority of cases occur in structurally normal hearts. However, approximately one-quarter of children with congenital heart disease develop SVT. Common symptoms of SVT include respiratory distress, shortness of breath, chest pain, palpitations, poor feeding, syncope, pallor or irritability. SVT is usually a stable rhythm but can degenerate if not managed appropriately. SVT can cause acute heart failure, most commonly in children older than 1 year of age with heart rates of > 200 bpm for > 24 hours.

The acute management of SVT depends on the clinical status. Patients who have signs of hemodynamic instability and poor perfusion should immediately have synchronized cardioversion (0.5-2 J/kg) performed. Stable children with mild or no symptoms should have vagal maneuvers performed. The most common vagal maneuver used in infants and young children is an ice pack applied to the face for 15-30 seconds. Older children may be instructed to perform a valsalva maneuver. Carotid and orbital massage are no longer recommended.

For stable SVT that does not convert with vagal maneuvers, anti-arrhthymic drug administration is indicated. Adenosine is the initial and most common pharmacologic agent of choice. Because adenosine has a very short half-life, it must be administered RAPIDLY as a bolus followed immediately by a saline flush via a proximal peripheral IV (antecubitum most common) at a dose of 0.1 mg/kg (6 mg maximum) IV bolus. If no effect after 2-3 minutes, a second dose of 0.2 mg/kg (maximum 12 mg) should be administered. Amiodarone or procainamide are additional drug therapy options if SVT persists despite adenosine administration. If the dysrhythmia persists, synchronous cardioversion should be performed. 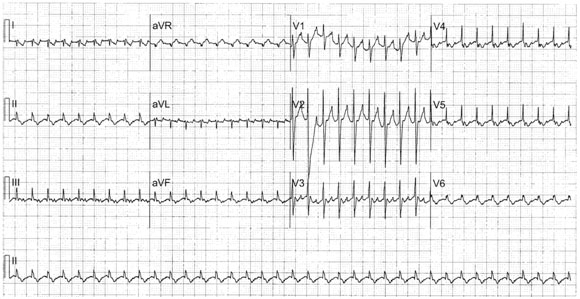 A 5-month-old boy presents to the ED with poor feeding, vomiting, and irritability. The patient’s digits are evaluated and no hair tourniquet is found. Fluorescein is used for an ocular exam to ensure no corneal abrasion. While performing the abdominal exam to rule out incarcerated hernia, the femoral pulses are noted to be fast. The cardiac monitor is attached and reveals a rapid heart rate of 222 bpm. Which feature of this most common dysrhythmia distinguishes it from other tachydysrhythmias?