CHICAGO – Forget goblins and witches this October. The changeover to ICD-10 required by the first of the month is much scarier than anything likely to occur on Halloween, according to a new study published recently in the American Journal of Emergency Medicine.

Nearly 500 common used emergency ICD-9 codes – 27% of 1,830 – have convoluted mappings that could create problems with reporting or reimbursement, according to study results. In addition, when reviewing more than 24,000 actual ED clinical encounters, 23% of those codes with convoluted mappings were likely to be assigned incorrectly if CMS recommendations were followed.

"Despite the wide availability of information and mapping tools, some of the challenges we face are not well understood," said principal investigator Andrew Boyd, MD, assistant professor of biomedical and health information sciences at UIC. Boyd and his team have developed a free tool, available online, that reports the ICD-9 to ICD-10 code mappings.

Correct classification of diagnoses in the ED is necessary for proper hospital reimbursement, clinical documentation, case-mix acuity indices, medical necessity for procedures, services and admissions, and reporting of disease to public health departments, the study points out.

CMS provides forward and backward mappings between ICD-9-CM and ICD-10-CM classifications, but study authors point out that many codes “share complex reciprocal relationships that may lead to confusion and incorrect coding. This issue has potential to be exacerbated by the fact that a significant percentage of the billed codes are highly complex, pointing to the problem of ICD-10-CM conversion complexity and the increased number of clinically incorrect codes used under the ICD-10-CM classification.”

The researchers suggest that, because of increased complexity, emergency physician groups attempting to perform coding internally instead of outsourcing are likely to “encounter challenges in adoption that will require dramatic changes to current procedures and operations.” 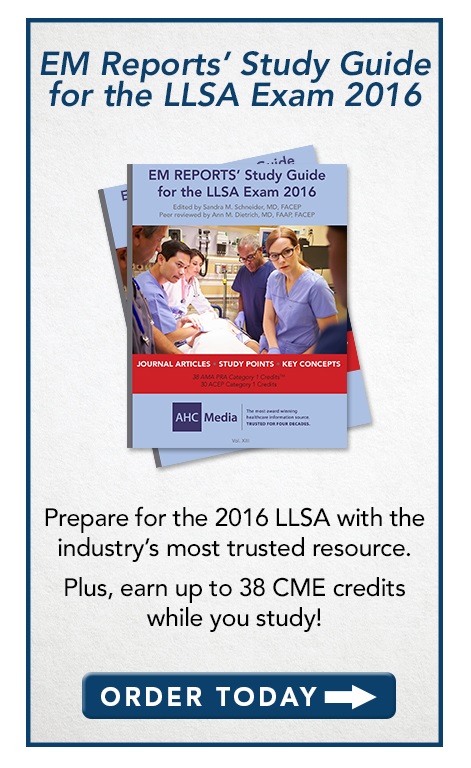 TUCSON, AZ – Emergency physicians are well aware of the agonizing wait for trauma patients to receive plasma, knowing that more of them would survive if the product could be delivered more quickly.

A new study on a rapid deployment plasma protocol, published recently in the journal Transfusion, points out that the traditional way of giving patients plasma involves two time-consuming steps – testing for blood type and then thawing frozen plasma – but maintains the process doesn’t have to take 30 or more minutes, as it usually does now.

"There's a golden hour after trauma where you need to be able to stabilize the patient," explained lead study author Deborah Novak, MD, of the University of Arizona in Tucson.

The new guideline calls for delivering thawed plasma to trauma patients’ bedsides within 10 minutes of arrival; 11of 12 sites were consistently able to deliver six units of thawed universal donor plasma to their trauma-receiving unit within 10 minutes and 12 units in 20 minutes. Approximately 4,700 units of plasma were given to the 680 patients enrolled in the trial in which investigators evaluated the utility of guidelines for massive transfusion developed by the American College of Surgeons Trauma Quality Improvement Program.

Traditional trauma resuscitation involves giving the patient crystalloid fluids and red blood cells early on, and then administering plasma and platelets later, according to background information in the report, which notes that plasma is typically stored frozen and thawed only when trauma staff request it.

The method successfully treats most trauma victims with mild or moderate injuries, according to study authors, but military and civilian researchers have found that individuals with massive bleeding benefit when they receive plasma at the same ratio as red blood cells.

"A renewed look at the process resulted in the concept of transfusing plasma earlier, with red blood cells and plasma in ratios that approximate the reconstitution of the original unit of whole blood," Novak pointed out, adding that less blood was wasted than researchers had feared.

"What we found out and what other places have found is that trauma teams can safely use AB or limited amounts of A plasma for that small window when the patient's blood type is not yet known," she said, emphasizing that the finding could help sustain supplies of unthawed plasma for trauma use.

That question led the Society for Academic Emergency Medicine and several European groups to issue joint recommendations which were published recently in the European Heart Journal.

"This is the first guidance to insist that acute heart failure (AHF) is like acute coronary syndrome (ACS) in that it needs urgent diagnosis and appropriate treatment,” noted lead author Alexandre Mebazaa, MD, PhD, of the Heart Failure Association (HFA) of the European Society of Cardiology (ESC). “In ACS, when the coronary is occluded we say 'time is muscle' which means that the quicker the vessel is dilated, the more heart muscle is saved. The same principle is true for AHF."

Mebazaa said the goal is to achieve in AHF similar reductions in mortality and morbidity as seen with ACS. The way to do that, he added, is by “introducing the time to therapy concept together with new medications for AHF.”

"Failure to treat quickly aggravates underlying chronic heart failure and can induce complications including cardiogenic shock and acute respiratory distress,” Bellou said. “Patients may need to be intubated which can increase their risk of mortality."

The joint recommendations include:

AHF treatment is complicated by patient anxiety, Mebazaa pointed out, explaining, "Dyspnea causes more anxiety for patients, families and doctors than chest pain. Anxiety is also caused by low oxygen levels in the brain. Unfortunately there are no medications to relax patients without worsening their respiration and blood oxygen levels. But we can reduce anxiety by talking to patients and families and giving oxygen."

Background information in the study notes that from 30-40% of discharged AHF patients are back in the hospital within 30 days.

"Inconsistency in medicine is never good for patients,” Mebazaa added. “Many patients with AHF are hospitalized many times and may receive different treatment for the same event in the emergency room, ICU or CCU. We hope to standardize care by recommending best contemporary practices based on the latest evidence."

This August, AHC Media celebrates 40 years of continuing education excellence with a two-day interactive Summit addressing the top 10 issues in emergency medicine (EM) today, *derived through a survey of more than 1,500 EM Physicians. **AHC Media cordially invites all of its past and present customers to attend the event and earn 14.5 AMA PRA Category 1 Credits™ and/or 14.5 nursing contact hours — for free! Call 800-688-2421 or email Summit@AHCMedia.com to request the free attendance code.

Not yet a customer?
Become one and you will be instantly eligible for free registration!
Call us at 800-688-2421 or send an email to Summit@AHCMedia.com to learn more and register.