BALTIMORE – Your hospital probably doesn’t want to be on this top 50 list.

A report published recently in the journal Health Affairs lists the 50 hospitals in the United States with the highest markup of prices over their actual costs.

Of course, most patients don’t pay the “chargemaster” price because of government and private insurance negotiated rates, the authors point out. On the other hand, they note, out-of-network patients and the uninsured, as well as auto and workers' compensation insurers, bear the brunt the mark-ups, which can be more than 1,000% for the same medical services.

"There is no justification for these outrageous rates but no one tells hospitals they can't charge them," said Anderson, a professor in the Bloomberg School's Department of Health Policy and Management. "For the most part, there is no regulation of hospital rates and there are no market forces that force hospitals to lower their rates. They charge these prices simply because they can."

For the study, the researchers analyzed the 2012 Medicare cost reports from CMS to identify the 50 hospitals with the highest markets, averaging more than 10 times what Medicare allows. Overall, U.S. hospitals charged an average 3.4 times the Medicare-allowable cost in 2012.

The study notes that 49 of the 50 with the highest charges are for-profit hospitals, and 46 are owned by for-profit health systems. Half of them are part of Community Health Systems, Inc., and more than a fourth are operated by the Hospital Corporation of America. Florida is the state with the most hospitals on the list – 20.

"For-profit hospitals appear to be better players in this price-gouging game," explained Bai, an assistant professor of accounting at Washington & Lee University. "They represent only 30% of hospitals in the U.S., but account for 98% of the 50 hospitals with highest markups."

The report says only two states – Maryland and West Virginia – set the rates that hospitals can charge for services.

According to the article, the nation’s most expensive hospital is North Okaloosa Medical Center, about an hour from Pensacola on the Florida Panhandle, where the charges average 12.6 times more than Medicare allowable costs. 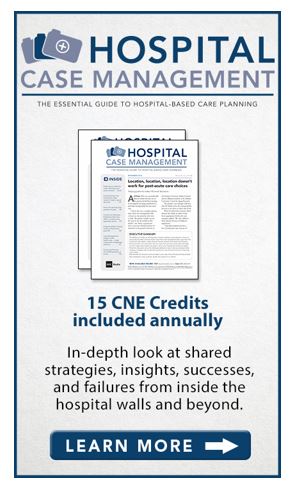 BOSTON – Just because 30-day readmission rates have become a federal quality metric for inpatient quality of care and unnecessary healthcare utilization doesn’t mean they are always the best measure.

In fact, a new study published in the Annals of Internal Medicine suggests two quality metrics for readmissions – 8-day and 30-day. That way, according to researchers from Beth Israel Deaconess Medical Center, the parameters would take into account how risk factors for readmission change significantly over the course of the month following hospital discharge.

To determine that, the researchers reviewed more than 13,000 discharges involving more than 8,000 patients in 2009 and 2010. They found that early readmissions – defined as 0-7 days post discharge -- were associated with markers of the acute illness managed during initial hospitalization, while chronic illness was more important in predicting late readmissions, defined as 8-30 days post discharge.

"Our research found that risk factors for readmission evolved during the first 30 days following hospital discharge," said lead author Kelly L. Graham, MD, MPH, a physician at Beth Israel Deaconess and an instructor at Harvard Medical School. "Readmissions in the first week were more highly associated with factors related to the initial hospitalization than later readmissions. These findings suggest that the standard 30-day metric does not accurately reflect hospitals' accountability for readmissions."

Discharging patients earlier in the day, between 8 a.m. and 12:59 p.m., lowered the odds of an early readmission, according to the researchers, who suggest that time window gives patients and their families more opportunity to access community resources such as pharmacies and social support.

Low health literacy was linked to both early and late readmissions, while patients with unsupplemented Medicare or Medicaid were more likely to be readmitted eight days or more after discharge.

BALTIMORE – Delirium is a fact of life in intensive care units (ICUs), with an estimate one-third of patients suddenly developing inattention and confusion.

A new meta-analysis suggests the condition is more than temporarily alarming for patients and families, however. It also increases hospital stays and the patient’s risk of dying in the hospital, as well as raising the likelihood of long-term cognitive decline by as much as 30%, according to a new study appearing in the British Medical Journal.

The study led by Johns Hopkins University researchers establishes the most definitive link thus far between delirium in the ICU and poor outcomes.

"Every patient who develops delirium will on average remain in the hospital at least one day longer," explained co-author Robert Stevens, MD, a specialist in critical care and an associate professor at Johns Hopkins University. Even worse, Stevens pointed out, "if you're admitted to the intensive care unit and you develop brain dysfunction, your risk of not surviving your hospital stay is doubled."

For the study, researchers focused on 42 studies that were prospective observational cohorts or clinical trials of adults in ICUs. All focused on participants who were assessed with a validated delirium screening or rating system and included an association with at least one of four clinical endpoints -- death during admission, length of stay, duration of mechanical ventilation, and any outcome after hospital discharge. Excluded were studies of patients with neurological disorders, those admitted to intensive care after cardiac surgery or organ/tissue transplantation, and those being treated for alcohol or other substance withdrawal. Of the 16,595 patients, 5,280 (32%) had confirmed cases of delirium.

The meta-analysis of the data suggests that delirium doubles hospital mortality, even after adjusting for severity of illness.

A first step for decreasing delirium, according to Stevens, is to reduce or eliminate the use of medications such as benzodiazepines, which, although administered to patients to help them calm down and sleep, may also cause disorientation and confusion. In addition, he said, nighttime interruptions should be kept to a minimum to ensure that patients get a good night's sleep without sedatives.

The study notes that other causes of delirium may be much more difficult to address. One, the inflammatory hypothesis, suggests that illnesses elsewhere in the body, such as severe pneumonia, can lead secondarily to brain inflammation. Delirium also is suspected of being caused by disrupted flow of blood to the brain, sometimes resulting in unrecognized strokes.

SAN FRANCISCO – Making sure that patients resume taking angiotensin receptor blockers (ARBs) as soon as possible after surgery decreases their risk of death over the next month.

That’s according to a new study published online by the journal Anesthesiology. Researchers from the San Francisco Veterans Affairs Medical Center and the University of California San Francisco found significant benefits in resuming the common high blood pressure medications within two days after surgery.

"Sometimes doctors briefly stop ARB medications around the time of surgery because they are known to cause low blood pressure while under general anesthesia, which can be dangerous for the patient,” said lead author Susan Lee, MD. "Our study highlights the importance of resuming medications that patients were previously taking at home as soon as it is feasible after surgery."

For the study, researchers focused on more than 30,000 patients who were regularly taking ARB medication prior to surgery and were admitted to the VA Healthcare system for non-cardiac surgery between 1999 and 2011. Nearly a third of the patients didn’t have their usual ARB medications resumed within two days of surgery, increasing their chance of dying over the next several weeks. The 30-day mortality rate for those starting back on ARBs within two days was 1.3%, compared to 3.2% for those whose ARBs were withheld, according to study results. The effect was even greater in patients younger than 60 years old.

Resumption of ARB medications might reduce complications after surgery, according to the researchers, who also found reduced rates of infection, pneumonia, heart failure and kidney failure in patients who started back quickly on their hypertension drugs.

Physicians sometimes withhold ARB medication after surgery because of fear that patients might develop dangerously low blood pressure or disrupted kidney function. Yet, even after accounting for those complications, the study found the 50% lower mortality rate in the first month after surgery.

Another issue, according to the report, is that patients are often transferred to different units within the hospital immediately after surgery, and some regularly prescribed medications may not be resumed during the transitions of care.


The CMS Manual for Critical Access Hospitals:
Everything You Need for Compliance (3-Part Series)

Did you know that about a third of the CMS critical access manual has been rewritten?

CMS issued a final manual on April 7, 2015, implementing significant and numerous changes. These include rewriting the section on nursing, drugs and biologicals, pharmacy, dietary, infection control, lab, radiology, contracted services and adding the rehab section, IV medication, safe opioid use, and blood. This three-part program will include information on the entire 270-page manual as well as every tag section in the regulations and interpretive guidelines.