Polio Eradication 2011: A Work in Progress

Are We Close to Understanding the Role of Fingolimod in the Treatment of MS?

A Bump in the Road Leading to Global Poliomyelitis Eradication

SYNOPSIS: The switch to a bivalent live attenuated oral polio vaccine by elimination of serotype 2 will be coordinated with the use of trivalent inactivated vaccine. The goal

is to eliminate outbreaks of polio due to vaccine serotype 2, the major cause of such events.

The use of live, attenuated oral polio vaccine (mostly trivalent) has been a major component of the World Health Organization (WHO) Global Polio Eradication Initiative since the resolution to eradicate poliomyelitis throughout the world that was promulgated by the World Health Assembly in 1988. The program has brought polio to its knees. Of the three serotypes of polio virus, wild-type polio virus 2 (WPV2) was eliminated in 1999, while the last time WPV3 was detected was in November, 2012, and circulation of WPV1 is currently only occurring in parts of Pakistan and Afghanistan. This success, with the world on the brink of eradication of polio, has had a downside due to the fact that it has been largely accomplished by the use of an attenuated, but nonetheless viable, virus. One risk is the very rare sporadic occurrence of reversion of the vaccine strain to neurovirulence, causing vaccine-associated paralytic polio (VAPP). More worrisome is significant genetic diversion from the vaccine strain as a result of prolonged replication and/or circulation with the development of neurovirulence. Circulating vaccine-derived polioviruses (cVDPV) resemble WPV and may cause outbreaks in areas with low coverage by oral polio vaccine. VDPVs may replicate in some individuals with primary immunodeficiencies who may excrete them for years — these viruses are designated iVDPV.

During January 2014 to March 2015, new outbreaks of cVDPV occurred in both Madagascar and South Sudan, but there was also a marked reduction in type 2 cVDPV in Nigeria and Pakistan. In addition, an additional 8 patients from 6 countries were found to be excreting iVDPV and, remarkably, a previously identified patient was still excreting iVDPV after more than 28 years. (See Figure 1.) 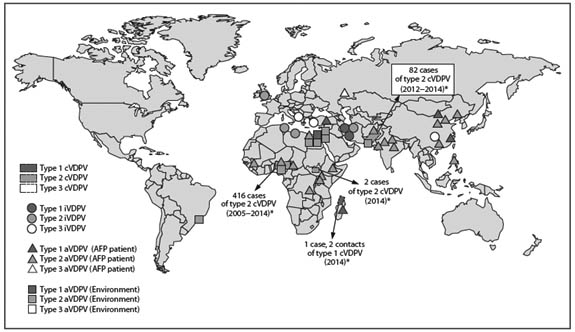 Since 2006, 686 cases of paralytic polio caused by cVDPV have been identified, and > 97% of these were caused by cVDV2. (See Figure 2.) Since WPV2 was eliminated 26 years ago, a logical step is to discontinue the use of OPV serotype type 2. WHO has, in fact, announced that this component will be withdrawn from all immunization activities and programs through a global replacement of all trivalent with bivalent OPV (bOPV) containing only types 1 and 3 polioviruses. This changeover will require careful synchronization to minimize the risk of new outbreaks due to cVDV2 during the transitional period. To further reduce the risk of such outbreaks, injectable trivalent inactivated poliovirus vaccine (IPV) is being introduced into routine immunization schedules in all countries. 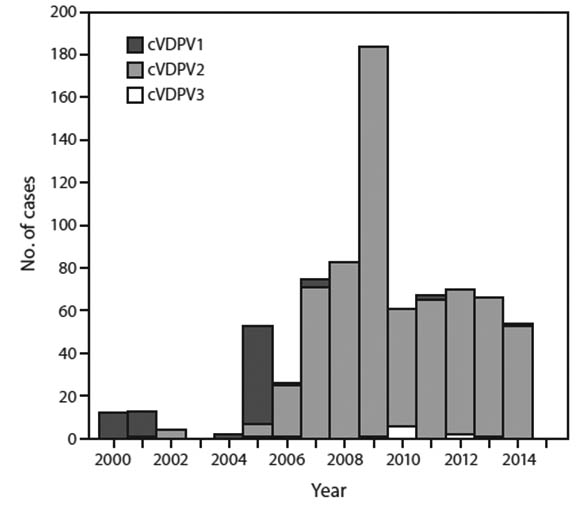 Relying on IPV may, however, prove problematic. In Israel, WPV1 has recently been repeatedly isolated in the course of routine environmental surveillance despite the fact that the country has a high rate of coverage with IPV. OPV has not been used for just over a decade and this has allowed silent circulation of WPV that had been introduced into the country. This experience demonstrates the necessity of ongoing acute flaccid paralysis surveillance and high-quality environmental surveillance. Of further criticality will be rapid detection and response to cVDV2 outbreaks should they occur.

BCG — Back to the Future?