ICU Outcomes and Triage in Elderly Patients with Advanced Cancer 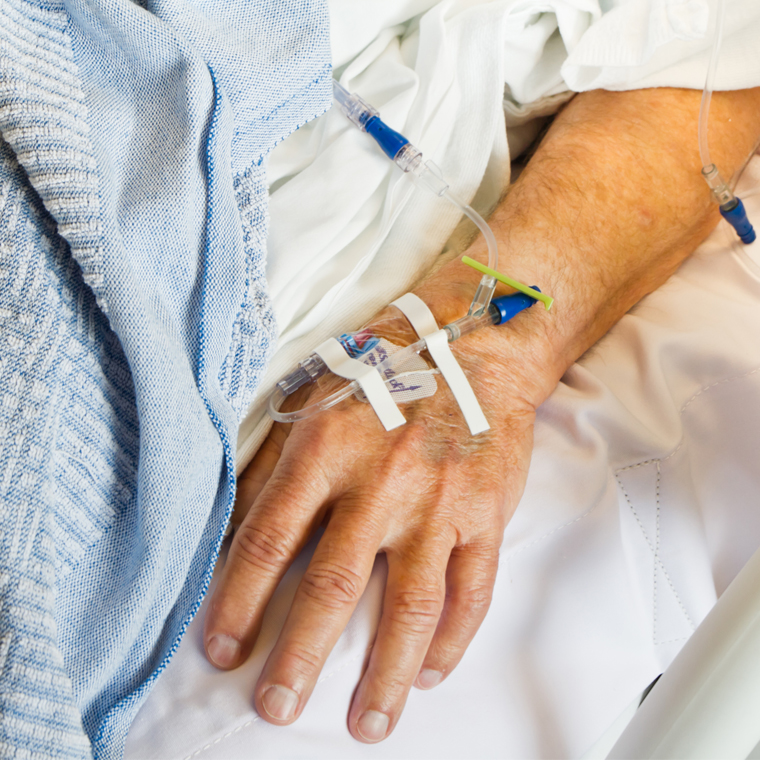 EORTC Cancer in the Elderly: Task Force Guidelines for the Use of Colony-Stimulating Factors in Elderly Patients with Cancer

Dr. Chen reports no financial relationships relevant to this field of study.

Intensive care use is increasing worldwide. The total number of available ICU beds is increasing as well. In one report, the total number of adult ICU beds in the United States was estimated to have increased from 67,000 to 77,000 between 2000 and 2009 (about 15%), mirroring population growth. In contrast, acute care beds have changed little.1 ICU bed occupancy in the United States is estimated at approximately two-thirds, but varies based on type of ICU, hospital type, and hospital size.2 Worldwide practices for admission into ICUs vary; in areas with high ICU beds per capita, such as the United States, ICU admission criteria may be more lenient than in Europe and Asia, where ICU bed availability is much lower.3,4 In developing nations, ICU beds are scarce and in extremely high demand.3,4 When beds are insufficient, ICUs employ triage strategies to select patients most likely to benefit from ICU admission, excluding those who are considered too well or too sick to benefit.5 The triage process is complex, affected by factors such as reasons for requesting ICU admission, evaluation and decision about appropriateness by the intensivist, and bed availability.6 Objective triage criteria have been developed and validated; these criteria include myriad parameters, such as age, diagnosis, comorbidities, vital signs, lab values, and others.7 They have not been widely adopted and may be too cumbersome to calculate in routine clinical decision-making.

Two patient populations to consider when contemplating ICU triage include the elderly, particularly the very old (age > 80 years), and those suffering from advanced cancer (either solid tumor or hematologic). Historically, these two populations often were excluded from consideration of intensive care due to their poor prognosis. Older guidelines described metastatic cancer patients unresponsive to chemotherapy as “generally not appropriate for ICU admission,” and prior to the mid-1990s, any use of life-sustaining treatment in cancer patients was associated with high mortality rates greater than 70%.8,9 What are the outcomes and benefits of ICU admission for very old patients and those presenting with advanced cancer?

The proportion of the population that is > 80 years of age is growing rapidly, as are their healthcare needs. Indeed, the number of patients ≥ 80 years of age admitted to the ICU in recent decades has increased rapidly, and they are sicker than in the past. Elderly patients present with more comorbid conditions and less physiologic reserve, which may worsen their prognoses.10 In Australia and New Zealand in 2005, patients > 80 years of age represented 14% of total ICU admissions; based on growth patterns, by 2015, 25% of admissions to the ICU were predicted to be ≥ 80 years of age.11 In France, a cohort comparison study reported that a three-year cohort that concluded in 2004 demonstrated significantly higher severity of illness than a cohort that concluded in 1995.12 Despite similar mortality, the more recent cohort received significantly higher intensity of treatment that resulted in a much higher chance of survival when adjusting for disease severity

Weighing the risks and benefits of ICU admission for elderly patients includes many potential considerations. Admission to an ICU following planned surgery in an appropriate surgical candidate results in good outcomes. A French review reported that elderly patients who required an ICU stay after planned surgery experienced 12% ICU mortality, 25% hospital mortality, and 72% of survivors discharged.13 However, those with unplanned ICU stays for a medical indication or emergency surgery experienced much higher mortality (38-64% ICU mortality, 45-55% hospital mortality, and one-year mortality of 60-90%) with poor long-term quality of life.13 Several international studies found that among older patients with a high severity of illness, age alone was associated with higher mortality, whereas comorbidities and pre-hospitalization functional status were poor predictors of outcome.11-13 Elderly patients are more prone to ICU-related complications such as nosocomial infection, iatrogenic complications, imposed bed rest, sleep deprivation, delirium, and increased length of stay; thus, rapid discharge from the ICU is recommended when possible. However, studies have shown that despite hesitance to admit elderly patients to the ICU, elderly patients may experience a greater mortality benefit from an ICU stay compared with their younger counterparts.10

As with the elderly, there may be hesitance to admit those with cancer, particularly advanced cancer, to the ICU because of the high potential mortality. In the past, those with metastatic disease or neutropenia often were automatically rejected from the ICU.8 Considering advances in critical care with improvements in mortality, give thoughtful consideration to each cancer patient regarding the potential benefit of ICU admission.

The use of ICU care for patients presenting with advanced cancer is increasing. A Brazilian and French study both reported that cancer was present in approximately 20% of all ICU admits.14,15 Although the incidence of new cancer diagnoses each year has increased gradually, improved treatment has led to improved survival and, thus, more patients living with cancer.16 Additionally, of those with cancer, the proportion who are admitted to the ICU are increasing as well. One U.S. database analysis of older adults suffering from advanced lung cancer demonstrated an increase in ICU admissions from 17.5% to 24.7% between 1993 and 2002, even while hospice use increased from 28.8% to 49.9%.17 Another U.S. review of 848,303 Medicare patients revealed an increase in ICU use during the last month of life from 24.3% in 2000 to 29.2% in 2009, and a Canadian study reported an increase in ICU admissions for patients presenting with cancer within 30 days of death from 3.06% in 1993 to 5.39% in 2004.18

Prognostic factors for mortality in critically ill cancer patients have been described in various studies (see Table 1). The Turkish study referenced previously found that four variables were independent predictors for ICU mortality: 1) progressive cancer, as opposed to limited stage or in remission, 2) higher Acute Physiology and Chronic Health Evaluation II scores at the time of admission, reflecting higher severity of illness, 3) sepsis or septic shock during the ICU stay, and 4) use of vasopressors.20 The Brazilian group also found that mortality was influenced by higher severity of organ failure at the time of ICU admission, active cancer, as well as poor performance status and need for mechanical ventilation.14 One French study observed that mortality, as related to organ failure, was more correlated with severity of organ failure at day three rather than at the time of admission.21 Type of malignancy and presence of neutropenia (including neutrophil count or duration of neutropenia) were found by multiple recent studies to have no effect on short-term mortality.9,14 Delayed admission to the ICU also was associated with higher mortality, so early admission is strongly recommended. Among cancer patients, one special group includes patients with stem cell transplants; those with autologous transplants were found to demonstrate no difference in mortality rates than other cancer patients, but those with allogeneic stem cell transplants did experience higher mortality.9,19

Multiple models have been proposed for determining admission or rejection into the ICU or for setting initial duration of time-limited trials (see Table 2). In France, one ICU reported a standard policy of refusing admission to bedridden patients and those in whom no cancer-directed treatment was available.15 This same center recommended unrestricted admission to those with a new diagnosis of malignancy that had not yet been treated, acute tumor lysis syndrome, bulky or infiltrating tumors at the earliest phase of treatment, or patients in complete remission, as well as a five-day, time-limited trial of full intensive care services for those who do not fit the criteria.15 A later study by the same group suggested that patients with a history of allogeneic stem cell transplant with graft-versus-host disease, age > 70 years, and altered performance status should not be recommended for ICU admission. A U.S. simulation model also recommends time-limited trials of one to four days of ICU care for those with poor prognosis from solid tumors with very high severity of illness, citing that longer trials did not result in improved survival; those with hematologic malignancy and less severe illness may benefit from longer trials of intensive care.23 Due to the unreliability of triage models, many sources recommend at least a three-day trial of full ICU care before deciding to withdraw life support.

In addition to considering the risk of morbidity and mortality when deciding on admission of elderly patients or those with advanced cancer to an ICU, consider the perspectives of family members. This is important because family members may bear the brunt of decision-making, grief, and post-discharge caregiving. One study of families of patients with advanced cancer found lower satisfaction with end-of-life care in those who experienced an ICU admission within 30 days of death and higher satisfaction among those who died at home and who received hospice care for more than three days.24 Another study of family members of elderly patients reported high levels of stress, anxiety, and depression related to decision-making in the ICU.25 These studies clearly underscore the benefits of trying to avoid unnecessary ICU admission in terminal situations and the importance of advance care planning to help these patients meet their end-of-life goals.

There is no question that the provision of early comprehensive palliative care is important in the elderly and those suffering from cancer. A landmark study in 2010 showed that early outpatient palliative care in patients presenting with metastatic lung cancer resulted in improved quality of life, decreased aggressive care, and even longer survival.26 The palliative care group experienced significantly fewer hospital admissions than the standard care group (36.7% vs. 53.6%), hence fewer ICU admissions.26

Although improving palliative care efforts is important, these interventions do not always result in decreased admissions to the ICU at the end of life. A Canadian survey of family members of patients > 80 years of age who were admitted to the ICU found that despite 24% of family members preferring comfort measures only, 84% of those patients received life-sustaining treatments during their ICU stay, and 20% of them for more than seven days.25 One U.S. study found that 47% of patients who died in an ICU with advanced cancer, poor functional status, and poor prognosis had completed advance care planning discussions with their physicians prior to ICU admission.18

Make efforts to assess for preference and avoid the unnecessary stress, burden, and cost of ICU admission in those whose families would prefer palliative measures. Less than 60% of families of elderly patients in the ICU reported that a physician had spoken with them about choosing between treatment options for their family member within 24 hours of admission; they also reported a poor understanding of both their role in decision-making and what the doctors told them.25 This stresses the importance of continued efforts on the part of physicians to improve communication with families of critically ill patients in the ICU.

The very elderly and those with advanced cancer should not be excluded from admission to the ICU based on those qualities alone. The number of patients with advanced age and advanced cancer is on the rise, and ICU use among those populations is increasing. Although ICU bed availability may dictate some triage decisions, these at-risk patient populations may benefit from earlier admission to an ICU if this is consistent with their goals of care. Early palliative care, advance care planning prior to the terminal phase, and comprehensive communication efforts while in the ICU are recommended for the elderly and those with advanced cancer. Extremely moribund patients may not benefit from aggressive ICU care, but at the time of triage it is difficult to predict those patients. Thus, prognostic factors and family preference should be considered when deciding on ICU admission, but early admission with a time-limited trial of at least three to five days often is warranted regardless of clinical status to patients who were not previously moribund. Continue improving clinical management, communication, and decision-making to improve outcomes as well as patient and family satisfaction for the very old and those with cancer in the ICU.

ICU Outcomes and Triage in Elderly Patients with Advanced Cancer

How Good Is Passive Leg Raise at Predicting Fluid Responsiveness?