Auth in Place, Then Different Procedure Is Done? Avoid “No Auth” Claims Denials

Auth in Place, Then Additional Procedure Is Done? Take Steps to Avoid ‘No Auth’ Claims Denials

Auth in Place, Then Different Procedure Is Done? Avoid “No Auth” Claims Denials

A pre-registration authorization team has been in place for several years.

“This team has increased in FTEs over the last year, simply to keep up with the changing demands of authorization requirements by the payers,” Salyer says.

The team offers authorization services to physician offices for various service lines. These include MRI, CT, ultrasound, and the sleep lab.

“Any physician in our area can take advantage of this service when sending their patient to our facility,” Salyer explains.

In recent months, the team is facing some new challenges with authorizations.

“We have seen a major increase in denials for medical necessity, pre-service,” Salyer reports. (See the department’s chart at the end of this article showing claims denial trends.)

“This jeopardizes the scheduled visit,” Salyer says. “Many times, the insurance company does not make this request until just 24 hours prior to the visit.”

Payers take between three and 10 days to obtain the authorization for diagnostic services.

“We have utilized technology that uses a combination of messaging and ‘screen scraping’ to pull the authorization, once available, back into our health information system,” Salyer reports.

If the physician’s office already has initiated or obtained the authorization, the system feeds the information into the hospital’s EPIC system.

“If our team initiates the auth, the system will continue to ‘ping’ the payer until the auth message is returned,” Salyer explains. “It’s not perfect, but it helps.”

This speeds the process considerably, since registrars don’t have to constantly call payers or physicians’ offices to learn the status of the authorization.

“This process is much like the automated notification of admission used by many facilities,” Salyer notes.

The department recently started tracking the number of “no authorization” denials and delays in authorizations.

“We have seen a marked increase in full denials for service, prior to service,” Salyer says. “We have tied delays in authorizations to payer delay, and not process delay.”

Patient access collaborates with the contract management team to combat this problem.

“We are working to find ways to negotiate an expedited authorization process,” Salyer says, noting the department uses this “10-5-1” day rule for scheduling:

The authorization team then works with the physician’s office to obtain the necessary records.

“If obtained timely, the visit can be moved up in the schedule,” Salyer adds.

“But in those cases, we will need to utilize the physician’s office to assist us in obtaining the authorization,” Salyer says.

If a physician already has an authorization on file, scheduling is expedited for the next available time slot, if convenient with the patient.

“If a patient arrives without an authorization, we require a letter of understanding be signed,” Salyer says, noting that this informs the patient that an authorization is not on file, and they may be held responsible for the payment.

If this form is not obtained, the patient must be held harmless for payment per the hospital’s contractual agreements.

“The pre-registration team communicates this information in advance to patients as soon as it is known that an authorization is not on file,” Salyer says.

The patient access department at Chesapeake (VA) Regional Healthcare tracked a recent increase in the number of denied authorizations, pre-service, per month for six months in 2016. 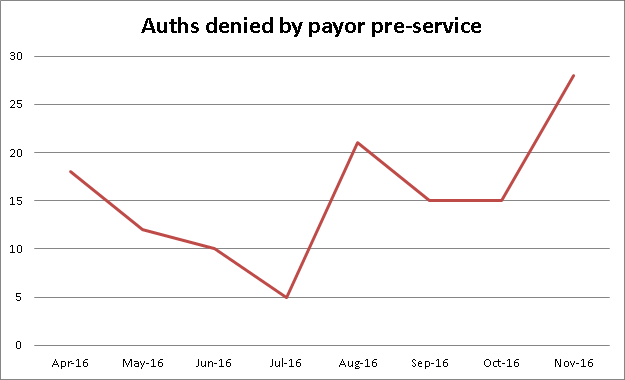 Payers Want Up to 14 Days to Review Authorization Requests