Religious Faith and Health After Cancer

For Most Patients on Dialysis, Religious/Spiritual Beliefs Are Important

Dr. Feldman reports no financial relationships relevant to this field of study.

SYNOPSIS: Women who report regular attendance at religious services have a lower suicide rate than those who report not attending services at all.

The role of spirituality and religion in medicine, and particularly in mental health, has been debated for more than 100 years. Studies in these areas tend to be difficult to interpret because of methodological limitations. Providers are left without clear answers or guidelines for best patient care, despite suggestive evidence that addressing spiritual practices and incorporating a patient’s beliefs into medical treatment are an essential part of healing.1

Multiple studies and medical investigations have compared religion and suicide rates. VanderWeele et al referred to sociologist Emile Durkheim as one of the earliest known researchers to investigate this association. In his work Suicide, Durkheim noted that suicide rates in Europe were higher in Protestant than in Catholic regions; he attributed the lower suicide rates of the Catholics to a number of factors, including religious prohibitions and less encouragement of autonomy (Durkheim 1897, as cited by VanderWeele).

In recent years, more studies, including some case-control studies, have examined survey data regarding suicide and religion. Few investigations contain rigid methodological criteria and even fewer have a large number of participants. Additionally, prospective, cohort designs are lacking. In other words, there are fewer studies looking forward to establish a link between risk factors and disease rather than looking retrospectively to study those who have developed a disease.

The VanderWeele et al study was designed to overcome these classical methodological challenges. Using selected data from the Nurses’ Health study,2 a large prospective cohort study, the investigators were able to access a large pool of participants and follow them for a significant period of time. Using specific statistical techniques, they were able to control for multiple confounding factors.

The Nurses’ Health Study began in 1976 and included more than 100,000 U.S. nurses between the ages of 33 and 55 years.2 Participants completed a questionnaire regarding lifestyle and medical history every two years. VanderWeele et al studied the subgroup of 89,708 participants who responded to the 1996 questionnaire and included the section on religious service attendance (those who did not respond to this section were excluded from the study group). Follow-up data for suicide were collected until one of the following conditions was met: 1) completed suicide, 2) loss to follow-up, or 3) the end of the study (June 2010). In this manner, 36 suicides were identified among all the participants in this subgroup. The group was about 97% white and primarily Christian, with approximately 40% of the identified study population self-reporting as Catholic and just over 50% self-reporting as Protestant.

VanderWeele et al used results from the 1996 questionnaire about religious attendance as the primary variable in their study. Response categories regarding frequency of religious service attendance allowed a range of answers from never, to almost never to monthly, weekly or more than once weekly. Religious service attendance was included in the questionnaires only every four years. VanderWeele et al incorporated the 1992 data on lifestyle factors including religious attendance to avoid reverse causation and to include as one of several confounding factors. These researchers believed it was important to identify many prospective confounders. In order to do so, they analyzed study results in several ways, including excluding woman with depressive symptoms, those taking antidepressants, and those with a history of cardiovascular disease or cancer, and adjusting the social integration score to exclude religious attendance. In all cases, the lower rate of suicide among women who attended religious services once or more weekly remained significant. 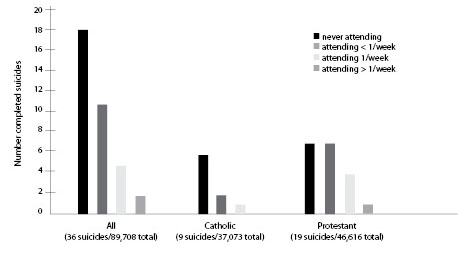 VanderWeele et al set out to examine the association between suicide and religious service attendance. Recognizing the difficulty of attributing causation to a single factor, the goal was to proceed in a methodical, scientifically rigorous manner, controlling for as many confounding variables as possible and using large numbers of participants in a long-term, prospective approach. Use of the Nurses‘ Health study data certainly helped fulfill the criteria, giving them access to large numbers of participants over a number of years, but less desirably, it also resulted in a study of a homogenous population of largely white Christian female nurses.

The findings then must be interpreted in the context of the population; there is no indication from these results that religious service attendance in general is associated with lower suicide rate. In fact, there is every indication from the relatively low suicide rate (about half that of the general population) that this is a unique group not representative of a cross-section of the U.S. population.3

Additionally, despite convincing statistical analysis showing the significance of the findings, the authors acknowledged that the low number of total suicides (36 in all) makes conclusions difficult to generalize. It will be important to find other large more diverse groups to study in a prospective fashion before applying any conclusions to population as a whole. Of equal importance is to verify the accuracy of suicide events, as this study depended on reports from next of kin and state mortality files, making it possible that unreported suicides shifted accuracy of results and statistical analysis.

The manner of selection of study participants as well as the lack of a dedicated control group are two additional factors to consider when thinking about clinical application. Respondents to the 1996 survey who did not complete the section on religious attendance were eliminated from the participant group at the onset of the study, leaving the researchers with a selected pool of respondents who had completed survey questions regarding religion. The significance of this is speculative given the lack of any further information regarding the eliminated population, but possible selection bias leaves questions about the relevance of applying these findings when working with a diverse community of patients.

Despite all of this, the popular press took an almost immediate interest in these findings with headlines in publications such as Science Daily to the LA Times stressing the “news” that religious service attendance lowers the rate of suicide among women.4,5 Although some articles stressed the preliminary and narrow scope of these conclusions, others tended to broaden and extend the conclusions to religious service attendance in general.

Ironically, little attention was given to another area of perhaps more controversial emerging study regarding the association between religious service attendance and martyrdom or suicide attacks. Studies in this area are quite preliminary in nature, but suggest that rituals of religion and perhaps attendance at religious services have an association with suicide in the form of an attack or with suicide as a martyr in a range of faith-based communities.6

Other investigations looking at non-western religions and the eastern world have found less convincing evidence of a link between religious attendance and reduction in suicide rate, making it difficult to generalize findings from any of these studies.7

The results from this study revealed an association of religious service attendance with decreased suicide rate, but there is no evidence regarding cause and effect or “mechanism of action.” It may be that the effect of religion and service attendance on mental health in general is highly individualized and based on numerous interlocking psychosocial and environmental factors; future studies are needed before any conclusions can be made.

However, it is clear that this study provided specific evidence that self-reported religious service attendance is associated with a lower suicide rate in Catholic white female nurses and to a lesser extent in Protestant white female nurses. It is not too much of a stretch to postulate these findings may apply to larger group of educated white non-nurses of many religious backgrounds as well, although this should be verified independently to be sure. The question of how to use these somewhat narrow findings in clinical practice remains.

Perhaps the most important and relevant take-home message from this study is the importance of obtaining a spiritual history when working with patients. Using religion and service attendance in support of mental health of a patient best starts with understanding the role of faith in the everyday life of the patient. Opening the door to explore faith, religious beliefs, and religious community may allow a new approach to mental health and to suicide prevention in specific patients. As more studies in more diverse populations are completed, the relevance of understanding and incorporating spiritual beliefs into an individualized treatment or wellness plan will almost certainly grow and become an accepted and essential element of a medical history.

Supplements Instead of Food? A Specific Case for Yes