Encephalitis Due to Powassan Virus

Seasonal Coronavirus: A “Common Cold Virus” that May Be Lethal in Severely Immunocompromised Patients

Miscarriages May Be Tied to Zika Virus

SYNOPSIS: Powassan virus is transmitted by the same tick that carries the etiologic agent of Lyme disease and several other pathogens. The number of cases of encephalitis caused by this virus may be increasing in the endemic areas.

A 5-month-old infant living in eastern Connecticut was admitted to a hospital in November 2016 for evaluation and management of seizures that occurred a few days after onset of fever and vomiting. The history obtained at the time indicated that, two weeks earlier, the infant had been bitten by a tick, which was likely to have been attached for less than three hours before removal. CT of the brain was normal, and a lumbar puncture was performed; the cerebrospinal fluid (CSF) white blood cell (WBC) count was 125 cells/µL, with 81% lymphocytes. A symmetric pattern of restricted diffusion involving the basal ganglia, rostral thalami, and left pulvinar was detected on magnetic resonance imaging (MRI). Bacterial cultures of CSF yielded no growth and testing failed to detect evidence of infection with a number of arboviruses. Respiratory viral cultures also were negative.

An infectious diseases consultant requested that CDC test for evidence of Powassan virus infection, and IgM antibody directed against this virus was detected in a CSF sample obtained four days after the onset of illness. In addition, the antibody neutralizing titer was 1:32. Seizure control was achieved, and the patient was discharged on anticonvulsant therapy after seven days. At age 10 months, he was no longer receiving anticonvulsants and was reported to have normal motor and verbal development. MRI, however, revealed gliosis with encephalomalacia in both thalami and basal ganglia, along with volume loss and early mineralization in the left basal ganglia.

Powassan virus is a tick-borne flavivirus that was first identified in 1958 in Powassan, Ontario, in the brain of a 5-year-old boy who died with encephalitis. Powassan virus and the tick-borne encephalitis virus belong to the tick-borne serocomplex, which causes encephalitis in parts of Eastern Europe, far eastern Russia, and Asia, in addition to North America. This complex is distinct from the mosquito-borne serocomplex, members of which include dengue virus, West Nile virus, Japanese encephalitis virus, and St. Louis encephalitis virus. Cases in the United States occur in the Great Lakes region and the Northeast (see Figure 1); although the virus has been identified previously in ticks in Connecticut, the case summarized above is the first human case reported. 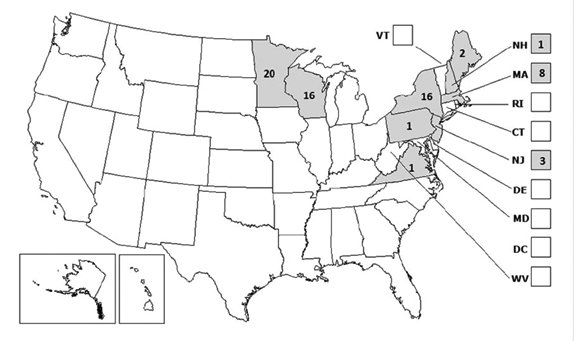 Powassan virus is known to be transmitted by at least three distinct tick species: Ixodes marxi, Ixodes cookei, and Ixodes scapularis, the last of which also transmits Borrelia burgdorferi, Borrelia miyamotoi, Anaplasma phagocytophilum, and Babesia microti. There are two lineages of Powassan virus. Lineage 1, which includes the prototype virus identified in 1958, is transmitted by I. cookei, with skunks and groundhogs as the main reservoirs. Lineage 2 virus (“deer tick virus”) is transmitted by I. scapularis and is maintained in the white-footed mouse.

Recognized infection is uncommon, with a median of seven cases reported each year from 2006 through 2015 in the United States (see Figure 2), although it has been suggested that the number of cases may be increasing, a conjecture that is consistent with a marked increase in seropositivity in deer in New England in recent decades. Approximately 3% of ticks examined in New York state are infected with Powassan virus. The virus is transmitted rapidly, requiring tick attachment for only 15 minutes and, as a consequence, one-half of infected patients remain unaware of having suffered a tick bite. In the case reviewed here, it is believed that the implicated tick likely was brought into the house on someone’s clothing. 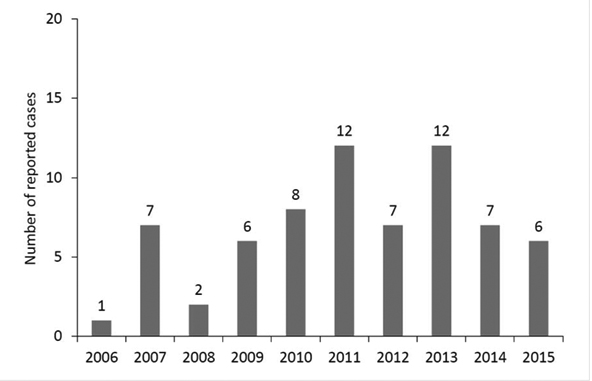 Most human Powassan virus infections are likely asymptomatic. Initial symptoms consist of fever and headache and, ominously, altered mental status. One-half have gastrointestinal symptoms and one-third have rash. Encephalitis, in some cases, may be delayed. In addition to encephalitis, meningitis, myelitis, or radiculitis is reported.

Examination of CSF demonstrates findings suggestive of a viral encephalitis, although occasional neutrophil predominance is seen early in the infection. T2 hyperintense lesions without enhancement commonly are seen on MRI and, as in the case reviewed here, diffusion restriction may be observed. Although lesions may occur elsewhere, involvement of the basal ganglia is common, as is the case with other flavivirus encephalitides such as that due to Japanese B encephalitis virus. As with West Nile virus, PCR testing is insensitive and the diagnosis is best made by detection of IgM antibody, preferably in CSF, with confirmation using a plaque reduction neutralization test to deal with potential cross-reactivity with other flaviviruses.

There is no specific treatment available, and an estimated 10-15% of patients with encephalitis die, while approximately one-half of survivors suffer residual neurological deficits. Prevention consists of avoiding tick bites, which, in brief, consists of wearing long pants and long-sleeved shirts, using effective tick repellent, performing effective screening, and performing tick checks. A more detailed set of preventive measures is available at the CDC web site.3

Ready for Dengue in the United States?