Hyponatremia in the Critically Ill

Airway Management in the Critically Ill: Challenges, Advances, and Controversies

Thrombocytopenia in the Critically Ill

Using Ketamine in the Critically Ill: A Clinical Review

Management of the Critically Ill Newborn After Delivery

Hyponatremia in the Emergency Department

Drs. Lopez Ruiz and Niven report no financial relationships relevant to this field of study.

Hyponatremia (serum sodium [Na] < 135 mmol/L) is the most common electrolyte disorder encountered in hospitalized patients (30-40%) and is present in 17.7% of patients admitted to the ICU.1,2 A recent registry demonstrated significant practice variation regarding this common disorder, underlining the frequent diagnostic and therapeutic challenges clinicians face in this area.3

Mortality increases in critically ill patients with hyponatremia, with adjusted odds ratios of 1.89 (95% confidence interval [CI], 1.71-2.09) and 1.81 (95% CI, 1.56-2.10) in the presence of mild (125-129 mmol/L) or severe (< 125 mmol/L) cases.3 The heterogeneous disease states that lead to hyponatremia underline the fact that this syndrome is a secondary pathophysiologic process due to a disturbance in water homeostasis rather than a distinct disease entity. Careful assessment and classification is important to direct diagnosis and treatment, reduce the risk of substantial morbidity and mortality in acute severe cases, and avoid the neurological complications associated with overly rapid correction.4 In the ICU, hyponatremia is associated most frequently with chronic conditions such as congestive heart failure, advanced renal disease, and cirrhosis. Acute symptomatic hyponatremia (coma, seizures) or subacute cases (mild to moderate altered mental status) commonly are due to the syndrome of inappropriate antidiuretic hormone secretion (SIADH), central nervous system disorders, and drugs such as narcotics, haloperidol, cyclophosphamide, thiazides, 3,4-methylenedioxymethamphetamine (ecstasy), or desmopressin.5

Decreased extracellular compartment osmolarity in hyponatremic patients creates an osmotic gradient relative to the intracellular space causing water influx into cells and resulting expansion. In the brain, a compensatory process occurs, first through decreases in intracellular electrolytes (K+ and Cl-) and then extrusion of organic solutes (including inositol, taurine, creatine, and glutamine) over the course of the next 24-72 hours to decrease brain water content. Brain edema occurs when the inflow of water exceeds the compensatory mechanism.6 Reversal of the brain’s adaptive process is slower and less efficient (three to seven days). During hyponatremia correction, extracellular compartment osmolarity increases, resulting in movement of water from the intracellular space. Rapid correction of hyponatremia can lead to effective dehydration of brain cells and demyelination.7

The diagnostic approach to hyponatremia is summarized in Figure 1. Initial evaluation should include a careful history and physical exam to determine the potential etiology and time course of illness. Pseudohyponatremia (falsely low sodium with normal plasma osmolality) is a laboratory artifact that may occur with high triglycerides (> 1,000 mg/dL) or hyperproteinemia (> 10 g/dL). Electrolytes are measured routinely by indirect potentiometry, a dilution method that assumes water constitutes 93% of the sample plasma volume. To avoid this artifact, sodium should be measured by ion-selective electrode using direct potentiometry.10

Hypotonic hyponatremia with maximally dilute urine (UOSM < 100 mOsm/kg) suggests that AVP is not a contributing factor. Common causes in this setting include excessive fluid intake and/or low solute intake (psychogenic polydipsia, beer potomania). It is worth noting that normal saline resuscitation in patients with hypovolemic hyponatremia may suppress AVP, resulting in excretion of excess free water and a low urine osmolality.

Other causes of hypotonic hyponatremia remain traditionally classified into hypovolemic, euvolemic, and hypervolemic categories. In hypovolemic hyponatremia, the patient has a deficit in total body water with disproportionate sodium loss commonly due to renal (UNa > 30 mmol/L) or extrarenal (UNa < 30 mmol/L) losses from vomiting, diarrhea, pancreatitis, or burn injury.18 Cerebral salt wasting (CSW) is a rare (< 6.5 %) cause of hypovolemic hyponatremia (central venous pressure < 5 cm H2O, hypotension) with UNa > 40 mmol/L in the setting of intracranial disease.19,20 Careful attention to the onset of hyponatremia, including the urine sodium excretion and volume status, is important in distinguishing CSW from SIADH.19

The most common cause of euvolemic hyponatremia in hospitalized patients is SIADH, a condition characterized by increased release of AVP or potentiation of its effects on renal vasopressin (V2) receptors independent of plasma osmolality.20 (See Table 1.) Patients classically present with low SOsm, UNa > 30 mmol/L, and abnormally high (higher than serum) UOsm (> 100 mOsm/kg). Serum uric acid level < 4 mg/dL, fractional excretion of uric acid (FEUA) > 12% (independent of the use of diuretics), and fractional excretion of urea (FEUrea) > 55% all have excellent positive predictive value for a diagnosis of SIADH.20,21

Patients with hypervolemic hyponatremia suffer from systemic arterial underfilling, resulting in increased beta-adrenergic activity, non-osmotic AVP release, activation of the renin-angiotensin-aldosterone system, and increases in sodium and water reabsorption. Because the renal response to low effective arterial blood volume is sodium retention, UNa < 30 mmol/L is common in this setting.22

Because of brain compensatory mechanisms, 48 hours is used commonly to differentiate acute from chronic hyponatremia. In daily practice, this distinction is difficult because the time of hyponatremia onset usually is unknown. Symptom presence and severity commonly drive treatment selection. Current guidelines recommend hypertonic saline (typically 3% saline) for acute or symptomatic hyponatremia.4,16 Hypertonic saline will reverse cerebral edema rapidly, and may be combined with loop diuretics in patients with hypervolemic hyponatremia.16 The Adrogué-Madias formula9,10 can estimate the volume required to reach a predefined increase in serum sodium, but current recommendations favor the use of fixed boluses for rapid, partial, and lifesaving correction (3-4 mmol/L) of sodium for acute, life-threatening symptoms to reduce the risk of overcorrection.4,9,16 In patients with life-threatening symptoms, 100 mL bolus of 3% saline (513 mmol/L) over 10 minutes predictably will increase serum sodium by 1-2 mmol/L, and can be repeated up to three times or until symptoms resolve.23,24 An initial 4-6 mmol/L increase in sodium concentration can reduce intracranial pressure by 50% and frequently resolve neurologic symptoms.25 Previous reports in adults with severe traumatic brain injury or post-traumatic hypotension have shown that 3% saline administered via peripheral access is safe.26,27 When symptoms are less severe, 3% saline infusion at a rate of 1-2 mL/kg per hour can be used to increase the serum sodium by 1-2 mmol/L per hour.20 Potassium replacement will cause an increase in sodium, and should be considered when calculating the projected rate of correction.10 Serum sodium should be checked every two hours and the rate of the infusion adjusted accordingly based on the rate of change.

Less symptomatic patients with hyponatremia should be managed based on their underlying condition. The minimum goal of correction of chronic hyponatremia is 4-8 mmol/L per day, with a maximum of 10-12 mmol/L in the first 24 hours and 18 mmol/L over the first 48 hours.4,16 A lower limit of 6-8 mmol/L per day has been proposed in patients at high risk for osmotic demyelination syndrome (ODS), such as those with chronic serum sodium < 120 mmol/L, alcoholism, hepatic failure, orthotopic liver transplantation, potassium depletion, and malnutrition regardless of symptom duration.10

Patients with hypovolemic hyponatremia can be treated with normal saline and hypervolemic hyponatremia with diuretics with serial serum sodium every four to six hours. The treatment of other causes of chronic hyponatremia relies on reducing free water intake and/or increasing renal free water excretion. Free water restriction (< 1 L/d) is effective in 59% of SIADH patients.20,28 The urine to serum electrolyte ratio ([UNa + UK]/SNa) indicates if the patient is in an antidiuretic or aquaretic phase and can help estimate the degree of fluid restriction required to increase SNa.31

A UNa ≥ 130 mmol/L and UOsm ≥ 500 mOsm/kg predict a poor response to this therapy.28 These patients require pharmacologic therapy to increase renal free water excretion, using loop diuretics, vasopressin receptor antagonists, urea, and demeclocycline. Vasopressin receptor antagonists block AVP type 2 receptors in the collecting system, inducing aquaresis and increasing SNa in patients with SIADH, heart failure, or cirrhosis. Their role in the treatment of hyponatremic critically ill patients remains unclear.30 Current recommendations do not support their use in acute, severe (SNa < 125 mmol/L), or severely symptomatic hyponatremic patients at risk for ODS, as these drugs cause a slow, unpredictable increase in SNa.4,16 In certain cases of euvolemic or hypervolemic hyponatremia with concern for rapid correction or volume overload with saline, oral tolvaptan can increase SNa 5-6 mmol/L after 30 days of therapy29 and IV conivaptan 6-9 mmol/L within four days.32 Conivaptan exhibits a higher rate of overcorrection and ODS.32 Urea is a new therapeutic tool that induces an osmotic diuresis and renal free water excretion. Interestingly, vaptans and urea demonstrate a similar efficacy and side-effect profile. Although urea does not prevent overcorrection, it may reduce the risk of associated brain injury.30 Demeclocycline decreases UOsm by downregulating the activity of aquaporin.2 Nephrotoxicity is common, particularly in cirrhotics.4,20

Hypotonic fluids (10 mL/kg) or desmopressin (2-4 µg IV) are recommended when sodium correction limits are exceeded (> 6-8 mmol/L/day), especially when initial SNa is < 120 mmol/L. A combination of hypotonic fluids and desmopressin may be required in hypovolemic hyponatremia because a persistent water diuresis may ensue after hyponatremia correction. Experimental data indicate reversal of ODS symptoms and improved outcomes with reinduction of hyponatremia after rapid overcorrection.33,35

ODS is a serious demyelinating disorder typically involving the central pons (central pontine myelinolysis) but often extending into extrapontine structures (extrapontine myelinolysis). The clinical manifestations include hyperreflexia, pseudobulbar palsy, quadriparesis, parkinsonism, locked-in syndrome, and even death, and can arise one to seven days after overcorrection of hyponatremia. Two or more weeks from the initial neurologic manifestations might elapse before diagnostic findings on brain MRI and CT become evident. Fear of inducing osmotic demyelination from overcorrection of hyponatremia caused by excessive aquaresis has prompted the recommendation of treating severe hyponatremia with the combination of hypertonic saline boluses and IV desmopressin (2-4 µg) every six to eight hours to prevent a rapid increase in sodium.33 An infusion of D5W can be administered to lower the serum sodium if an overcorrection has occurred. A potential complication of this combined strategy is an aggravation of hyponatremia from retention of prescribed (e.g., medication diluents or tube feedings) or unprescribed hypotonic fluids. Moreover, the sodium and water retention resulting from this strategy can cause pulmonary edema and hypoxemia, especially in elderly patients. A retrospective observational study of 36 ICU patients diagnosed with ODS showed that 11 patients died but 14 patients exhibited good functional recovery at one year.34 Table 2 summarizes the treatment of hyponatremia as well as management of overcorrection. 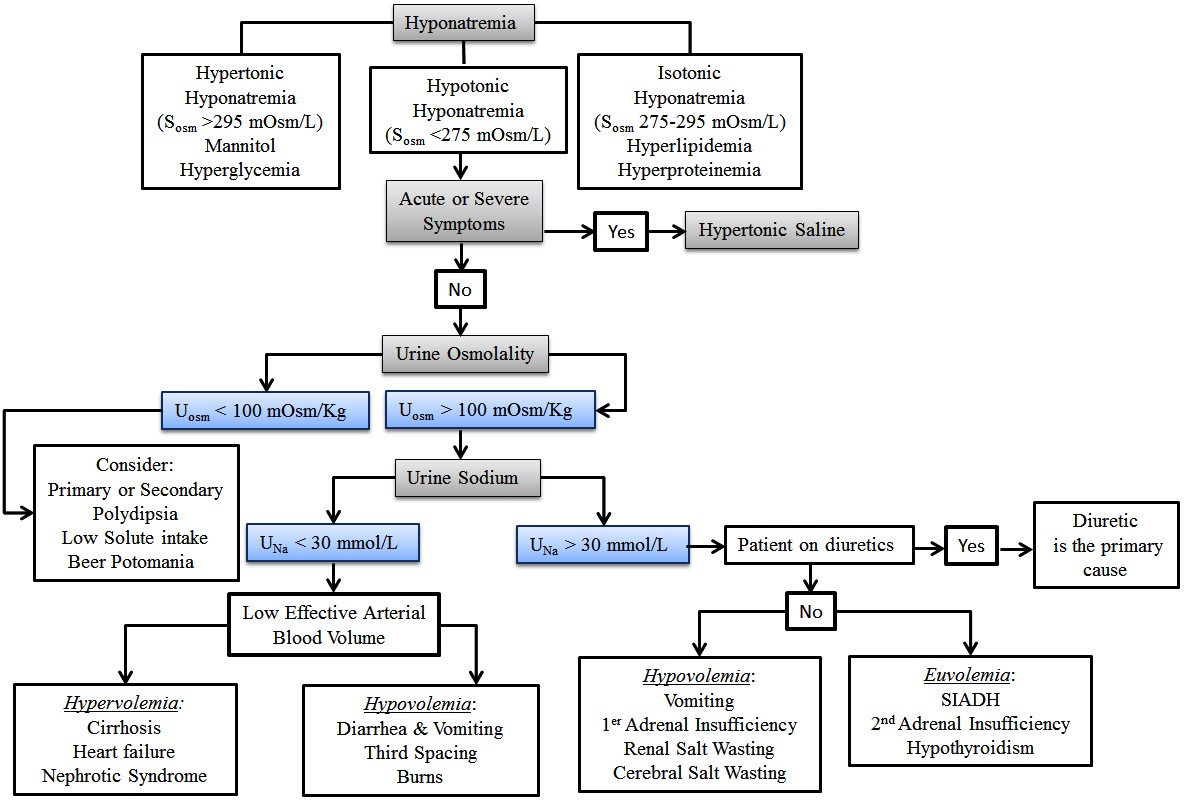 Hyponatremia in the Critically Ill

Is There Still a Role for High-frequency Oscillatory Ventilation in ARDS?

In-hospital vs. Telephone Availability of an Intensivist at Night