Meropenem vs. Piperacillin-tazobactam for Bacteremia Due to ESBL-Producers: The MERINO Trial

Acetaminophen for Fever in the ICU

Dr. Kuo reports no financial relationships relevant to this field of study. 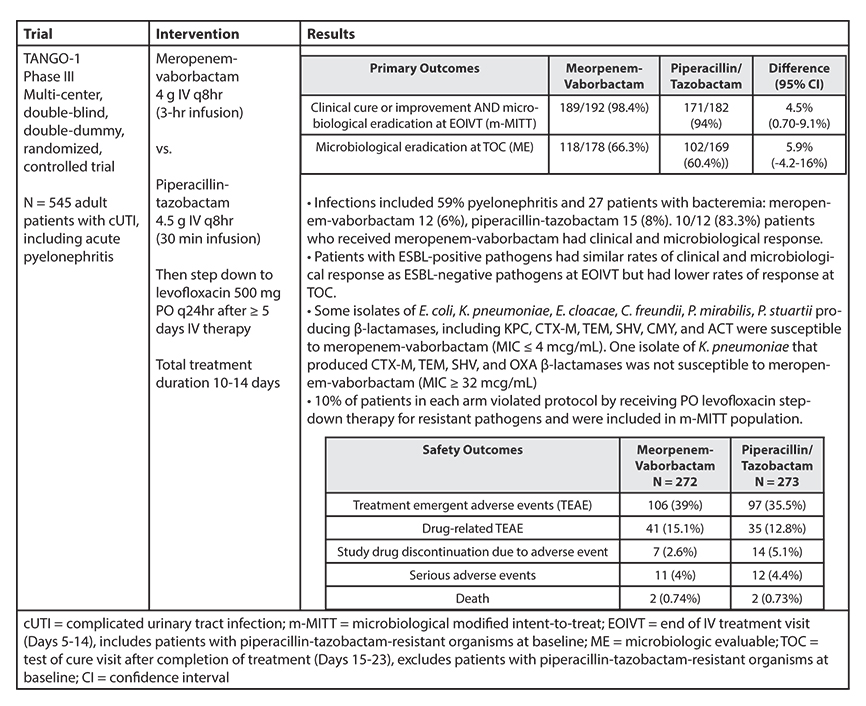 The most common adverse events reported in the Phase III clinical trial comparing meropenem-vaborbactam to piperacillin-tazobactam in adult patients with cUT/acute pyelonephritis were headache (8.8%), phlebitis/infusion site reactions (4.4%), and diarrhea (3.3%). Adverse events led to study drug discontinuation in 2.6% of patients receiving meropenem-vaborbactam compared to 5.1% of patients who received piperacillin-tazobactam. The most common reason for discontinuation due to adverse effect was hypersensitivity (1.1%), followed by infusion-related reactions (0.7%). Death occurred in two patients in each arm.

Carbapenems are considered the first-line treatment for multi-drug-resistant (MDR) gram-negative infections, including extended-spectrum β-lactamases. In a climate of increasing carbapenem resistance, meropenem-vaborbactam represents an important treatment option in the management of carbapenem-resistant Enterobacteriaceae (CRE). Given limited treatment experience, the role of meropenem-vaborbactam compared to current best available therapy for CRE remains to be seen, including any potential differences on clinical outcomes. Judicious use and further study of relative resistance thresholds also will be necessary, as breakthrough avibactam resistance already has been reported in patients treated with ceftazidime-avibactam. TANGO-2, a Phase III multi-center, open-label study comparing meropenem-vaborbactam to best available treatment in adults with serious infections due to known or suspected KPC-producing CRE has been completed but the results have not yet been published. Of note, researchers ended randomization to the comparator arm early after an interim analysis reported favorable efficacy and safety results with meropenem-vaborbactam.6