Home » How Would You ‘Date’ This Infarct?
ECG REVIEW

How Would You ‘Date’ This Infarct?

Case study: How would you manage this seizure?

Would You Do This to Your Mother?

How Fast Can You Recognize This Rhythm?

Dr. Grauer is the sole proprietor of KG-EKG Press, and publisher of an ECG pocket brain book.

The ECG in the figure below was obtained from a 48-year-old man who presented to the ED with a three-day history of chest discomfort. It clearly shows evidence of infarction. How would you “date” the infarct?

The rhythm is fairly regular at 85-90 beats/minute. Upright sinus P waves are seen in lead II. The PR, QRS, and QT intervals are normal. The axis is leftward, but not by enough to qualify as left anterior hemiblock (i.e., the net QRS deflection in lead II is not predominantly negative). There is no chamber enlargement.

Q waves are present in multiple leads. Small, narrow (probably septal) q waves are seen in leads I and aVL. The Q wave in lead II is narrow but deep. Although there may be a tiny initial positive deflection (r wave) in at least some of the beats in lead III, the QRS complex is notched (fragmented), and clearly all negative in lead aVF. This defines the QRS in lead aVF as a QS complex. Thus, the overall appearance of the QRS in the inferior leads strongly suggests there has been inferior infarction. Finally, there are Q waves in leads V4, V5, and V6. Although narrow, the Q waves in leads V5 and V6 are somewhat deeper than expected to be simple “septal” q waves.

R wave progression is not normal in the chest leads. Normally, there should be a predominant negative deflection (S wave) in lead V1, with the area of “transition” (where R wave amplitude supersedes S wave depth) not occurring until after V2 or V3. Instead, R wave amplitude in lead V1 already equals S wave depth in this lead, with prominent R waves seen by lead V2. Although a number of entities may produce a disproportionately tall R wave in lead V1, recent posterior infarction should be at the top of this list. ST-T waves show numerous abnormalities. Although ST segments are not elevated, there is ST segment coving with fairly deep T wave inversion in each of the inferior leads. Additionally, there is 1-2 mm of ST depression in leads V3-V6, with more subtle ST-T wave abnormalities in leads I and aVL. Finally, the T wave in lead V2 looks prominent, and appears to be disproportionately tall. ST-T wave changes of “reperfusion” typically manifest the appearance seen here; that is, with no more than minimal residual ST segment elevation, and with deep T wave inversion in lead groups that overlie the area of infarction. Since anterior leads (i.e., leads V1, V2, V3) provide a mirror-image perspective of posterior events, the prominent T waves we see in leads V2 and V3 most likely reflect recent posterior reperfusion. This is consistent with the presence of a disproportionately tall R wave in lead V1. Thus, although the process of “dating” an infarction often is not straightforward, in view of the history of chest discomfort for three days, the overall appearance of this 12-lead tracing is consistent with recent infarction, perhaps with onset at the time symptoms began.

For more information about and further discussion on this case, please visit: http://bit.ly/2iqm1YV. 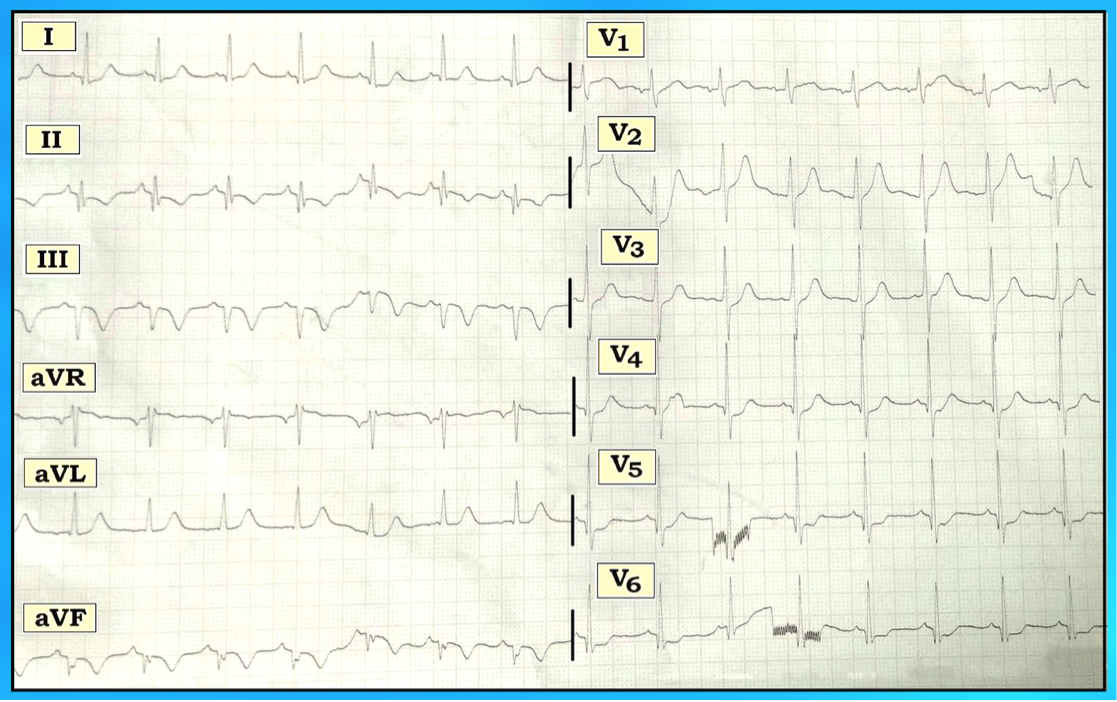 Is a Dabigatran Reversal Agent Effective?

How Would You ‘Date’ This Infarct?