SYNOPSIS: New recommendations for prevention of hepatitis B virus infection focus on testing and management of newborns.

As part of its commitment to eradicate hepatitis B virus (HBV) infection in the United States, the CDC has published an update of recommendations for the prevention of HBV infection by the Advisory Committee on Immunization Practices. The first two of four elements of the overall strategy have been routine HBsAg testing of all pregnant women and vaccination and hepatitis B immune globulin (HBIG) administration in the United States of all infants born to antigenemic mothers, as well as vaccination of all other infants shortly after birth. The third and fourth elements are vaccination of all previously unvaccinated children and adolescents, together with routine testing of at-risk adults.

The new recommendations include the following: The update now recommends that all pregnant women found to be HBsAg positive undergo testing for HBV DNA, which allows identification of infants at the greatest risk of infection.

The recommendations note evidence that antiviral therapy during pregnancy reduces the risk of transmission and point out that the American Association for the Study of Liver Diseases recommends treatment, preferably with tenofovir, of the mother if her HBV DNA level in plasma is > 200,000 IU/mL. All infants born to mothers for whom the results of testing during pregnancy are not known, but who have had prior evidence of HBV infection, should be treated as if born to antigenemic mothers.

Many of the new recommendations deal with the management of newborns and include the following. All clinically stable infants with a birth weight > 2,000 grams born to antigen-negative mothers should receive their first dose of vaccine within 24 hours of birth. Vaccinated infants born to mothers whose antigen status remains unknown should be tested for the presence of a protective anti-HBs level at 9-12 months of age. All vaccinated antigen-negative infants with anti-HBs levels < 10 IU/mL should receive another dose of vaccine and undergo repeat anti-HBs antibody testing 1-2 months later. The originating institution, upon transferring the infant to another facility, should communicate its status of vaccination and HBIG receipt.

The following unvaccinated adults have been added to those previously considered at high risk of HBV infection and who should be vaccinated:

All newborns weighing < 2,000 grams at birth should receive vaccine and HBIG within 12 hours of birth, regardless of knowledge of the HBsAg status of the mother. If it proves not possible to determine the mother’s status, the vaccine schedule should be completed as if the mother were antigenemic. In addition, they should undergo anti-HBs at 9-12 months and, if the serum level is < 10 IU/mL, they should undergo revaccination.

The incidence of newly reported cases of HBV infection since vaccination was first recommended has decreased from 9.6 cases per 100,000 population in 1982 to 1.1 per 100,000 in 2015, an 85% reduction. Taking into account lack of diagnosis and under-reporting, it is estimated that there were 21,900 new cases in 2015. Despite the overall decrease, there was a 114% increase in 2009-2013 in combined data from Kentucky, Tennessee, and West Virginia, which has been attributed to increasing injection drug use. In contrast to acute infections, 95% of chronic HBV infections occur in those who are foreign-born, approximately 3.5% of whom are infected. Thus, while there has been remarkable progress toward the elimination of HBV infection in the United States, much remains to be done. 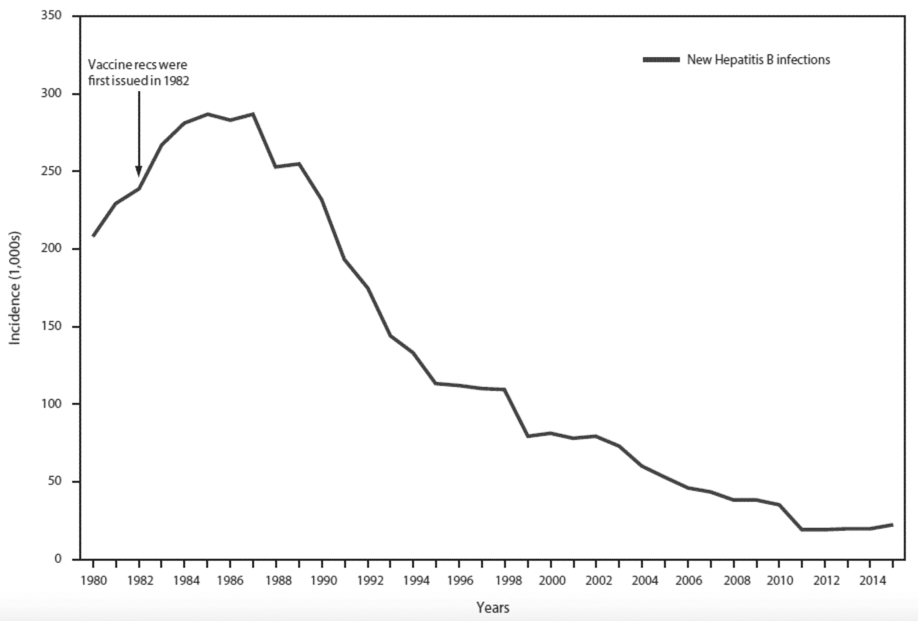 Root Causes of Hepatitis A Outbreak in California