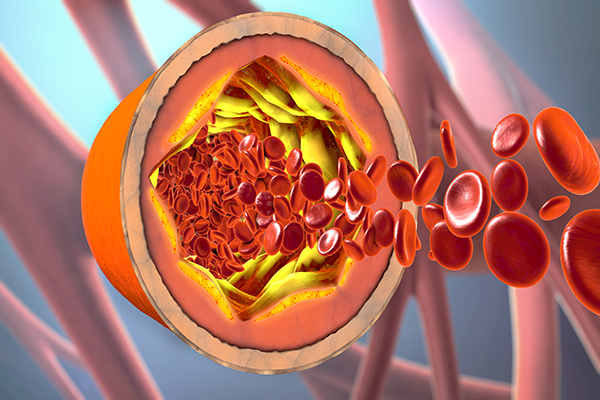 Investigators are working on an IV injection that could someday reverse atherosclerosis, a narrowing of arteries and blood vessels through the accumulation of plaque that is rich in low-density lipoprotein (LDL) cholesterol.

Medical professionals use statins to control LDL, often referred to as “bad cholesterol.” Additionally, surgeons might place stents or perform bypass surgery. However, these treatments can be invasive and don’t reverse the disease. A group of researchers synthesized self-assembling peptide-amphiphile nanofibers that target plaque build-up and could be delivered intravenously. The solution contains synthetically engineered nanofibers with an amino acid sequence that promotes cholesterol dissolution.

“Our aim was to develop a non-invasive, non-surgical, novel therapy to halt and reverse the disease by actually targeting the vessel wall with peptide-based nanofibers developed in the laboratory,” said Neel A. Mansukhani, MD, lead author of the study and an integrated vascular surgery fellow at Northwestern University Feinberg School of Medicine in Chicago.

Investigators genetically modified mice to rapidly develop atherosclerosis. Then, they fed the mice high-fat diets for 14 weeks. Later, the mice received biweekly injections of either the new solution or saline for eight weeks. Researchers used imaging techniques to determine the right dose, concentration, binding duration, and biodistribution. After 48 to 72 hours, researchers observed that the nanofiber dissipated and cleared in seven to 10 days. After eight weeks of treatment, investigators noted that plaque areas in the arteries reduced by 11% in male mice and by 9% in female mice.

These results “demonstrate that a novel targeted nanofiber binds specifically to atherosclerotic lesions and reduces plaque burden after a short treatment duration,” Mansukhani said, noting that this is preliminary research and more is needed before this approach can be tested in humans.

Three days after these researchers presented their findings, the World Health Organization (WHO) unveiled a strategy to eliminate trans-fatty acids from the global food supply. Trans-fatty acids are found in snack foods, baked goods, and fried foods. The compound can raise LDL levels, resulting in cardiovascular disease.

The American Heart Association “solidly stands behind the WHO and Resolve to Save Lives’ step-by-step plan to eliminate industrially produced trans-fat from the global food supply by 2023. Industrially produced trans-fat is unsafe, even when consumed at low levels, yet it is used around the world because it’s convenient, inexpensive, and it extends the shelf life of food,” Nancy Brown, the association's CEO, said in a statement of support. “Eliminating this unsafe ingredient from our diets will help give people across the globe a fighting chance against cardiovascular disease, the leading cause of death worldwide.”

Increasingly, U.S. physicians are turning to diet modifications, encouraging patients to eat healthier to alleviate many medical maladies. In the upcoming June issue of Clinical Cardiology Alert, Editor Michael Crawford, MD, writes about a recent comparison of a vegetarian diet (VD) vs. a Mediterranean diet (MD) to reduce cardiovascular risk. A randomized, open, cross-over study of a VD compared to an MD over three months showed that both diets reduced body weight and body fat mass. The VD decreased LDL cholesterol, and the MD reduced triglyceride levels. The MD reduced one type of inflammatory marker, and the VD reduced vitamin B12 levels.

“Because both diets were in low calories, it is not surprising that they were both equally effective at lowering weight and fat mass and produced equivalent effects on oxidative stress measures. The only differences detected were in inflammatory markers and lipid levels. The VD lowered LDL, probably because of the absence of meat, and the MD lowered triglycerides, probably because of fewer carbohydrates,” Crawford writes. “An editorial that accompanied this study … summed up the requirements quite well, noting that a healthy diet should be rich in fruits, vegetables, whole grains, legumes, and nuts. Diets also should be low in refined grains, processed food, saturated fat, sugar, and salt. A diet should be sustainable, culturally relevant, and enjoyable.”

For much more cardiovascular research updates and information about the benefits of a healthy diet, be sure to check out the latest issues of Clinical Cardiology Alert, Internal Medicine Alert, and Integrative Medicine Alert.