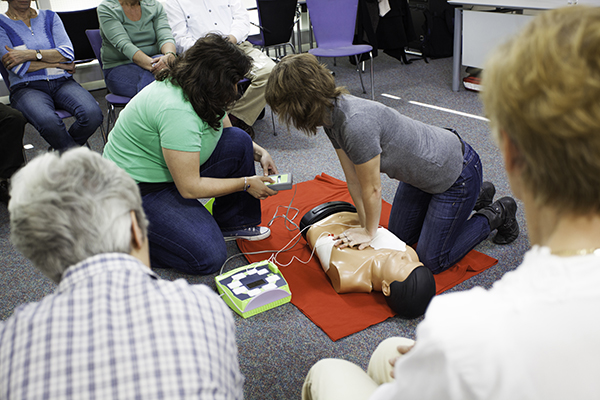 Delivering automated external defibrillators (AEDs) by unmanned drone to the rural site of a simulated cardiac arrest (SCA) event showed promise, according to the preliminary results of a Canadian study presented during the recent American Heart Association's (AHA) Resuscitation Science Symposium in Philadelphia.

In rural Ontario, investigators conducted four simulations to see if an unmanned drone could deliver an AED to a place where an SCA event was occurring. The researchers also sought to determine if the drone could deliver the AED faster than an ambulance. Investigators placed mock calls to 911, and an AED drone and an ambulance were sent concurrently from the same location to a predetermined destination for a mock SCA. Once there, trained first responders retrieved the AED from the drone and initiated resuscitative efforts on a manikin until paramedics arrived.

For shorter trips (distance ranged from 4.1 to 5.5 miles), the drone beat the ambulance each time (2.1 to 4.4 minutes faster). For longer trips (distance ranged from 12 to 18 miles), the drone was seven to eight minutes faster each time. The AHA reports that for someone in cardiac arrest, every minute without CPR increases the chance of death by 7% to 10%. Thus, speedier arrival times via drone could help save lives in rural areas, where there are fewer first responders, and those who work in those areas have to travel longer distances to respond to emergencies.

Sheldon Cheskes, lead author on this research and medical director at the Sunnybrook Center for Prehospital Medicine in Toronto, acknowledged to AHA some challenges, such as how the AED would be transferred from a drone to bystanders on the ground. However, Cheskes and colleagues are investigating how to overcome this issue and other possible obstacles to success.

The upcoming December issue of Clinical Cardiology Alert includes an article about placing more AEDs in public places to help save lives. A study of the location of out-of-hospital cardiac arrests (OHCAs) compared to the location of AEDs in Denmark showed that if the placements of AEDs more closely matched the location of OHCAs, bystander defibrillation and 30-day survival would improve.

As in the Canadian study, these Danish authors focused on the volume of AEDs available. However, device availability, location placement, and delivery speed are only parts of the equation. “The presence of a bystander who is ready, willing, and able to use the AED (as well as perform CPR when necessary), a shockable rhythm that is not refractory to defibrillation attempts, and EMS services that can transport a victim to a hospital with facilities and services to manage them are equally critical,” author Joshua Moss, MD, wrote. “Assuming, as the [Danish] authors did, that additional AEDs will continue to be added month by month, there would seem to be little downside in using validated prediction models to help choose the locations for those AEDs, as long as privately funded devices are not discouraged. Parallel investment must be made in improving bystander education and response.”