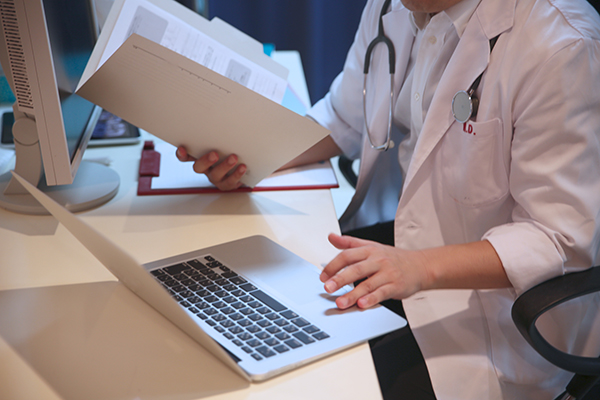 Analysis Details the Burdens
of Prior Authorization

The U.S. Department of Health and Human Services (HHS) has issued a report that provides recommendations for reducing administrative headaches through improvements to electronic health records (EHR) and other health information technology (IT).

"The strategy we are releasing today takes a hard look at ways that the federal government and stakeholders can work together to reduce the administrative and technological burdens experienced by healthcare providers," Don Rucker, MD, national coordinator for health IT, said in a statement. "Patients will benefit from these efforts because their physicians will spend more time focused on them instead of their keyboards."

As part of the 21st Century Cures Act, Congress called for recommendations to ease regulatory burdens, reduce administrative obstacles, and improve overall health IT, including making it easier to use EHRs. HHS heard feedback from practicing clinicians, health IT professionals, and many other relevant stakeholders, and released a draft recommendation in November 2018. More than 200 comments were issued in response to that draft, which led to the creation of this week’s final report.

"The taxpayers made a massive investment in EHRs with the expectation that it would solve the many issues that plagued paper-bound health records," Centers for Medicare & Medicaid Services Administrator Seema Verma said in a statement. "Unfortunately, as this report shows, in all too many cases, the cure has been worse than the disease. Twenty years into the 21st century, it's unacceptable that the application of health IT still struggles to provide ready access to medical records, access that might mean the difference between life and death. The report's recommendations provide valuable guidance on how to minimize EHR burden as we seek to fulfill the promise of an interoperable health system."

Time-consuming EHR work contributes to provider burnout, and can even affect patient safety. From there, the legal trouble starts, as reported in recent issues of ED Legal Letter. For example, thorough charting on the history and physical of an ED patient can prove the standard of care was met. Still, the medical record often contains little more than a series of checkboxes. If a poor patient outcome occurs, and someone alleges that outcome happened because the medical record was not detailed enough, plaintiff attorneys may have a field day in court.

“If you are over-relying upon electronic record templates for charting, you may be in trouble,” David Sumner, JD, a Tucson, AZ, medical malpractice attorney, warned in the January issue of ED Legal Letter. Conversely, an emergency physician defendant may prevail in malpractice litigation even if the diagnosis turned out to be wrong — if the chart demonstrated sound decision-making. As Sumner put it: “Free texting, even in electronic records, is your ally.”

But even a detailed record may be missing the right information. Of course, the issue becomes even more complicated when multiple providers are documenting in a single record. Thus, another EHR blind spot: One provider can see comments from another in an EHR — but maybe not if the provider is too busy to carefully review those other comments. Or perhaps there was a good faith difference of opinion.

Nevertheless, in court, a plaintiff attorney can make it appear as though a rushed, careless provider confused the patient with someone else. If an ED nurse stated the patient was in severe pain, and an emergency physician says the patient was pain-free, it is easy for jurors to believe an overwhelmed physician was mixed up while caring for multiple high-acuity patients. “The record is the foundation of the defense,” Kenneth N. Rashbaum, JD, a partner at New York City-based Barton, said in the February issue of ED Legal Letter. “If doubt is cast upon the accuracy of the record, the entire house of the defense can collapse.”

Even something as seemingly innocent as copying and pasting can compromise an entire medical record. How? Be sure to check out the upcoming April issue of ED Legal Letter to find out.

Meanwhile, healthcare leaders are have already started trying to improve their EHR systems. At Drexel University College of Medicine, administrators started using natural language processing (NLP) to improve the EHR, as reported in the December 2019 issue of Hospital Peer Review.

NLP is a subfield of linguistics that combines artificial intelligence with computer science and information engineering to optimize the interactions between computers and human language. For Drexel, NLP increased efficiencies, including more accurate data management, leading to the delivery of better care quality and improved billing practices.

As other health systems revise their EHRs, some are considering adding a case management module, as reported in the March issue of Hospital Case Management (HCM). An EHR that includes an acute case management module with robotic process automation can create seamless efficiency, according to Patricia Resnik, MJ, FACHE, CPHQ, vice president, care management at ChristianaCare in Wilmington, DE.

“In the past, case managers would have to go into the record and review it themselves by reading the medical record to determine whether it was an observation or inpatient level of care,” Resnik told Hospital Case Management. “Now, they can validate through an automated review.” Changes like this can lead to better communication between departments as well as stronger and faster decision-making.