Home » Is It Dizziness or Dementia?

Is It Dizziness or Dementia? 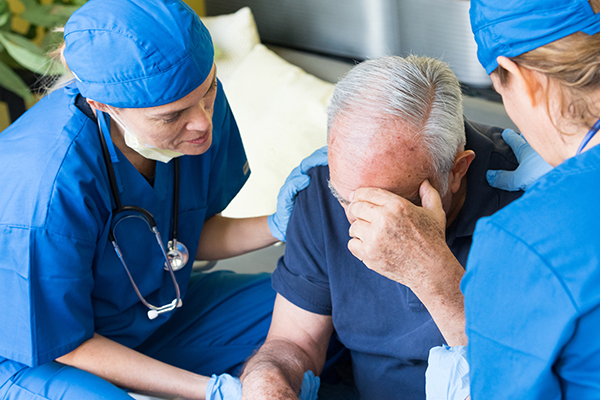 How Useful is Amyloid PET Imaging in the Diagnosis of Dementia?

Ever feel dizzy or lightheaded when standing too quickly? Perhaps the temperature in the room is too hot or you just need to drink a glass of water. According to a new paper, researchers believe this experience of dizziness may mean a higher risk of dementia later in life.

Investigators examined the data on 2,131 older adults (mean age = 73 years, 53% women, 39% Black) from the Health, Aging, Body Composition cohort study, specifically orthostatic hypotension (OHYPO) and visit-to-visit blood pressure (BP) postural changes. The authors defined OHYPO as a decline of ≥ 15 mmHg in systolic or ≥ 7 mmHg in diastolic BP after standing from a sitting position for one-third or more of visits.

Of the total population, the authors found 309 with OHYPO, 192 with systolic OHYPO, 132 with diastolic OHYPO, and 462 developed dementia. Researchers observed a link to dementia only in those with a decline in their systolic BP, not in subjects with just a diastolic BP decline or in those who experienced an overall BP decline.

Because the study was observational in nature, what the authors saw does not necessarily prove cause and effect. Still, there may be opportunities for preventive interventions.

“People’s blood pressure when they move from sitting to standing should be monitored,” Laure Rouch, PharmD, PhD, of the University of California, San Francisco and study author, said in a statement. “It’s possible that controlling these blood pressure drops could be a promising way to help preserve people’s thinking and memory skills as they age.”

The quest to crack the dementia code is ongoing and always evolving. In the April 2020 issue of Neurology Alert, author Jeffrey T. Jensen, MD, MPH, wrote about research that revealed longer lifetime exposure to endogenous and menopausal replacement were associated with better cognitive status in older adult women. Those who initiated estrogen therapy early (within five years of the onset of menopause) showed higher cognitive test scores than those who started later.

“This study provides some additional evidence that menopausal hormone therapy may reduce the risk of cognitive decline. The results must be viewed with caution, as they represent a highly selected sample of older white women living in Utah. All of the effects are modest, and many of the outcomes lose statistical significance with adjustment,” Jensen wrote. “Despite those limitations, the results provide additional support for the timing hypothesis, and add to the body of work that refutes the [Women’s Health Initiative] evidence suggesting cognitive risks associated with hormone therapy.”

For more on this subject, please read the latest issues of Clinical Cardiology Alert.