Grass roots send warning to HMOs: Ignore us at your peril

Does ‘C suite’ undervalue access? Don’t be shy about your successes! | Single Article

The convergence of CEOs and patient advocates

With the recent release of landmark compendium guidelines for prevention of six major health care-associated infections (HAIs), the immediate question is whether these practical, "actionable" guidelines will result in real action. Just because they are condensed, easy-to-use documents, doesn't mean they won't sit on a shelf and gather dust alongside their voluminous predecessors.

A favorable sign was that sitting at a press conference table along with the usual suspects in infection prevention were representatives of two powerful forces in health care. Appropriately bookending the panel were patient advocate Victoria Nahum — who founded the Safe Care Campaign after the death of her son Josh due to an HAI — and Rich Umbdenstock, president and CEO of the American Hospital Association (AHA). Having those two literally at the same table means the grass roots and the C-suite now are eye-to-eye. The human consequences of HAIs are becoming front and center issues for health care executives.

Nahum eloquently reduced a complex issue to a simple emotional context, condensing all the guidelines and strategies even more than the new compendium. "What if it is your — and you can fill in the blank — your young son, your beautiful daughter, your dear mother, your longtime friend — who is or might become sick or infected or even die from an HAI?" she asked at the press conference in Washington, DC. "Would you insist on [infection prevention] to make sure your loved one would not die?"

Umbdenstock heard the plea, saying "preventing HAIs is a major priority for the nation's hospitals." The AHA has the ear of health care executives, who must make that priority a reality within individual institutions if the compendium guidelines are to go from actionable to action.

"I am really pleased to be here to show the connection between the C-suite and the clinical leaders in that partnership that is so important to getting this work done," Umbdenstock said. "Ensuring an infection-free environment for each and every patient is one of our most daunting challenges. Nonetheless, it is one in which we must succeed."

Veteran infection preventionists will recall that the AHA dramatically went in the other direction in the mid-1990s, disbanding its infection control advisory panel in a concession to budget demands of the managed care era. Times have indeed changed, as a confluence of forces usher infection prevention into a new era of transparency and accountability. The grieving mother of a dead patient is knocking on the C-suite door. 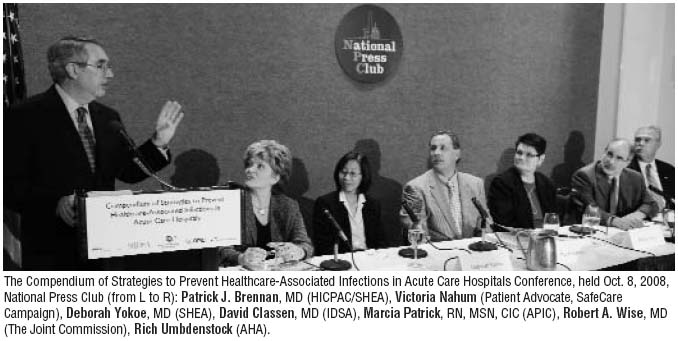