Synopsis: In patients with acute lung injury or ARDS, the addition of higher PEEP levels to the strategy of a low tidal volume does not improve clinical outcomes.

The aim of the study carried out by the ARDS clinical Trials Network investigators was to determine whether the use of higher levels of positive end-expiratory pressure (PEEP) would improve clinical outcomes among patients with acute lung injury or acute respiratory distress syndrome (ARDS) who were receiving mechanical ventilation with lower tidal volumes (6 mL per kilogram of predicted body weight) and inspiratory airway pressure (inspiratory plateau pressure 30 cm H2O or less). The primary outcome measure was the proportion of patients who died before they were discharged home while breathing without assistance. Secondary outcome variables included the number of ventilator-free days (the number of days a patient breathed without assistance for at least 48 consecutive hours from day 1 to day 28), the number of days a patient was not in the ICU from day 1 to day 28, and the number of days without organ failure from day 1 to day 28.

This trial was conducted from October 1999 through February 2002 at 23 hospitals of the National Heart, Lung, and Blood Institute ARDS Clinical Trials Network. During this period, patients who were intubated and mechanically ventilated were eligible if there was a sudden decrease in the ratio PaO2/FiO2 to 300 mm Hg or less, a recent appearance of bilateral pulmonary infiltrates consistent with the presence of edema, and no clinical evidence of left atrial hypertension. These patients were randomly assigned to receive lower or high PEEP levels, adjusting PEEP and FiO2 in discrete steps to maintain a SaO2 (measured by pulse oximetry) of 88 to 95% or a PaO2 of 55 to 80 mm Hg. The lower-PEEP strategy was the same used by the ARDS Clinical Trials Network investigators in their previous trial comparing ventilator strategies involving traditional and lower tidal volumes.1 (See Figure 1, below.) 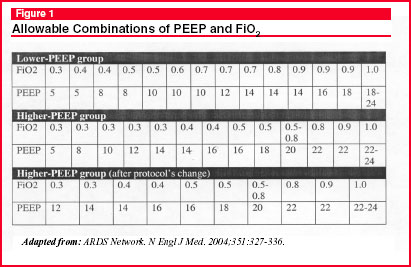 The higher-PEEP strategy was designed to use PEEP levels that were similar to those used in a previous trial in which higher PEEP levels and smaller tidal volumes were associated with better survival.2 (See Figure 1, above.) Moreover, patients randomized to the higher PEEP group were required to have a PEEP of at least 12 cm H2O for at least 12 hours after randomization to be included in that group. However, after 171 patients had been enrolled in the trial, the difference in mean PEEP levels between study groups on days 1 through 7 was less than the difference in the previous study that tested the effects of higher PEEP levels and smaller tidal volumes.2 Then, to approximate more closely the separation in PEEP between study groups as in this previous trial, the steering committee (without knowledge of the clinical outcome data) decided to modify the higher-PEEP strategy by eliminating the steps with a PEEP of less than 12 cm H2O and requiring a minimum PEEP of 14 cm H2O for the first 48 hours (see Figure 1, above).

The study did not show that the use of higher PEEP resulted in a statistically significant clinical outcome benefit. Mean (± SD) PEEP values on days 1 through 4 were 8.3 ± 3.2 cm H2O in the lower-PEEP group and 13.2 ± 3.5 cm H2O in the higher-PEEP group (P < 0.001). The rates of death before hospital discharge were 24.9 % and 27.5 %, respectively (P = 0.48; 95 % CI for the difference between groups, -10.0 to 4.7 %) (see Figure 2, below). From day 1 to day 28, breathing was unassisted for a mean of 14.5 ± 10.4 days in the lower-PEEP group and 13.8 ± 10.6 days in the higher-PEEP group (P = 0.50). There were no significant differences in the numbers of ventilator-free and ICU-free days. There were no significant differences in the number of days without circulatory, coagulation, hepatic, or renal failure or in the incidence of barotraumas. Changes in plasma levels of interleukin-6, surfactant protein D, and intercellular adhesion molecule 1 from day 0 to day 3 did not differ significantly between study groups. 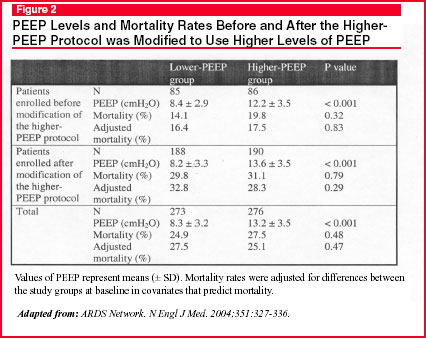 It is worthy of note that the data and safety board stopped the trial after 549 patients had been enrolled. At this time it was calculated that if the study had continued to the planned maximal enrollment of 750 patients, the probability of demonstrating the superiority of the higher-PEEP strategy was less than 1% under the alternative hypothesis based on the unadjusted mortality difference. However, although most of the baseline characteristics of the 2 study groups were similar, in the higher-PEEP group, the mean age was significantly higher (54 ± 17 vs 49 ± 17; P = 0.004) and the mean initial PaO2/FiO2 was significantly lower (151 ± 67 vs 165 ± 77; P = 0.03).

On the other hand, the authors also analyzed separately the results for the first 171 patients, studied before the modification of the higher-PEEP protocol, and the results for the subsequent 378 patients. Notably, the overall mortality rate among the first 171 patients was lower than that among the subsequent 378 patients (see Figure 2, above). This difference in overall mortality was associated with significant differences in several baseline characteristics that predict mortality. The authors assert that there was no apparent reason for these differences in baseline characteristics in the 2 phases of the trial other than chance variation. Baseline variables, main outcomes, and changes in plasma levels of interleukin-6, surfactant protein D, and intercellular adhesion molecule 1 from day 0 to day 3 were not significantly different between study subgroups in either the first 171 patients or the subsequent 378 patients.

I began my training in critical care a few years after Dr. Suter published, also in the New England Journal of Medicine, his study entitled "Optimum end-expiratory airway pressure in patients with acute pulmonary failure," showing that the end-expiratory pressure resulting in maximum oxygen transport (cardiac output times arterial oxygen content) and the lowest dead-space fraction both resulted in the greatest total static compliance.3 It was then clear to me that cardiovascular and respiratory systems work together to supply adequate amounts of O2 to the tissues and that understanding heart-lung interaction is central to the management of critically ill patients. It is particularly important when mechanical ventilation is used to support our patients.

I also remember when I stopped hearing the prominent sound of ventilators cyclically inducing tidal air movement into patients’ lungs. This happened after the article of Dr. Hickling,4 by the end of the 1980s, alerted us about the risk of high inspiratory pressure. It was then suggested that it may be very important to limit inspiratory pressure by reducing tidal volume, even if this results in hypercapnia and a deterioration of oxygenation in the short term.

Altogether, our ventilatory strategies evolved guided by the principles of maximize beneficial hemodynamic effects of ventilation and minimize its detrimental effects, as summarized by Dr. Pinsky in the early nineties (see Figure 3, below).5 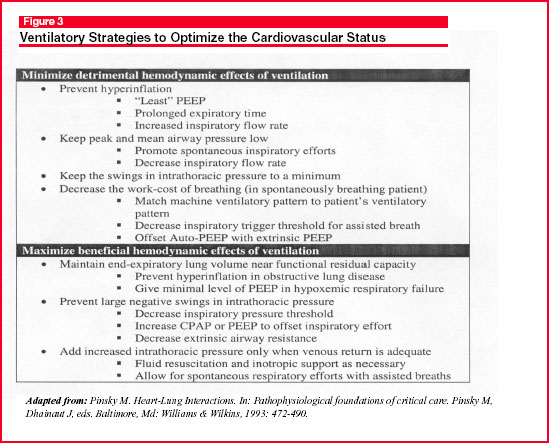 Recent data confirmed a significant survival benefit among patients who received a low tidal volume.1 The present ARDS Clinical Trials Network study (despite its complicated methodology and difficult interpretation of the results) suggests that higher PEEP levels do not improve clinical outcomes among patients with acute lung injury or ARDS who are receiving mechanical ventilation with lower tidal volumes and inspiratory airway pressures. It would appear, then, that the more than 10 years old aforementioned principles of—maximize beneficial hemodynamic effects of ventilation and minimize its detrimental effects (see Figure 3, above)—should still guide our ventilatory strategies.5

This history raises in my mind the question of what should be the evidence needed for guiding our therapy. At this regard, a recent editorial of Intensive Care Medicine entitled "Searching for evidence: don’t forget the foundations"6 dealt with the issue of how to integrate the whole trail of research in a field and translate it into a usable product for the care of patients. In this editorial, a single, but striking, example of the importance of studies judged to have a low scientific value when compared with large randomised controlled trials is the first description of ARDS by Ashbaugh, Bigelow, Petty, and Levine.7 It was a small case series. The editorial says: "The report would never qualify as an important contribution to current practice according to the criteria employed in an EBM [evidence-based medicine] search. This 1967 report described the basic characteristics of ARDS and the effects of PEEP on oxygenation. No clinical study has since proposed that patients with ARDS should be ventilated without PEEP. The report of Ashbaugh et al. still constitutes the basis for ventilator management of patients with ARDS." It seems there is not an easy answer. Ultimately, then, we can fall back on a perfectly rational and morally defensible principle of moral prudence.