By Ken Grauer, MD, Professor, Department of Community Health and Family Medicine, University of Florida. Dr. Grauer is the sole proprietor of KG-EKG Press, and publisher of an ECG pocket brain book. 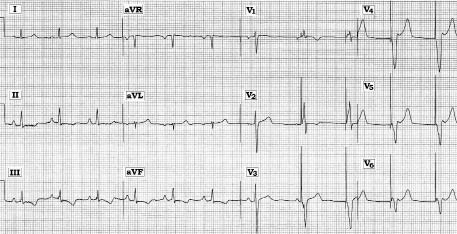 Scenario: The ECG shown above was obtained from a 77-year-old woman with chest discomfort and a permanent pacemaker. Do you see any abnormality on this paced tracing?

Interpretation: A lot is seen on this 12-lead ECG obtained from an elderly woman with chest pain and a permanent pacemaker. Definitive interpretation is problematic in view of the lack of a lead II rhythm strip, unavailability of prior tracings for comparison, and minimal information about her clinical situation and the type of pacemaker she has, but valid concern should nevertheless be raised that something acute may be in progress. Four pacer spikes are seen on this ECG, all occurring at the end of the tracing. The pacemaker R-R interval is regular and measures 950 msec (corresponding to a paced rate of 65/min). Each pacer spike successfully captures the ventricles. In addition to effective capture function, we presume appropriate pacemaker sensing is present by the observation that the initial part of the tracing shows a spontaneous normal sinus rhythm at a slightly faster rate (of about 70/min, corresponding to an R-R interval of 840 msec). The sinus rate gradually slows after the sixth beat in the tracing. When it does, the pacemaker appropriately takes over. These events are best seen in lead V3. The first QRS complex in this lead is a spontaneous sinus beat. The third (and last) complex in lead V3 is paced. The middle complex in lead V3 represents a fusion beat, with QRS morphology intermediate between that of the sinus-conducted first beat seen at the beginning of this lead, and the purely paced complex seen at the end. Fusion beats are common in pacemaker tracings, especially when the patient's underlying spontaneous rhythm is similar to the rate that the pacer is set at. The short PR interval preceding the middle beat in lead V3 reflects partial conduction by the sinus P wave, which is then interrupted by the pacing spike that occurs at precisely the appropriate escape interval (i.e., 950 msec after the preceding spontaneous QRS complex). ECG changes of ischemia or infarction can only be assessed from spontaneous beats on a pacer tracing. Inferior ST-T wave depression seen here should therefore raise concern about a possible acute process in this elderly woman with chest pain.

In Search of Safer NSAIDs: Which Cause the Least Risk of Upper GI Bleeding?