ECG Review: ECG from a 22-year-old Man in a Wheelchair

Health Benefits of Apple Cider Vinegar and Other Common Vinegars: A Review

Melatonin and Chemotherapy: A Review 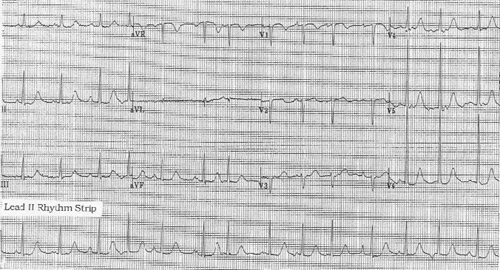 Figure. 12-lead ECG and rhythm strip obtained from an elderly woman
with an acute stroke. Should the patient be anticoagulated?

Clinical Scenario: The ECG and rhythm strip in the Figure were obtained from an elderly woman admitted for an acute stroke. Her neurologic deficit was not progressing, and she was clinically stable at the time of admission to the hospital. No history of smoking. The computer interpreted her rhythm as atrial fibrillation. Do you agree? Should the patient be anticoagulated?

Interpretation: In the absence of contraindications, the finding of atrial fibrillation is an indication for acute anticoagulation when a patient presents with an acute cerebrovascular accident (non-hemorrhagic TIA or stroke). However, the rhythm strip in the Figure does not represent atrial fibrillation. This is because atrial activity is clearly present throughout the rhythm strip. P wave morphology varies, virtually from beat to beat. A spectrum of disorders exists between the irregular supraventricular entities known as sinus rhythm or sinus arrhythmia with PACs (premature atrial contractions), wandering atrial pacemaker, and MAT (multifocal atrial tachycardia). The key to distinguishing between these three entities lies with determining if there is an underlying sinus mechanism to the rhythm. This is defined by the presence of an upright P wave shape with consistent morphology and a constant PR interval preceding many (if not most) of the QRS complexes on the tracing.

Although in its extreme form, a marked sinus arrhythmia with frequent PACs may be difficult to recognize, one can usually identify the presence of an underlying sinus mechanism by recognizing at least a few consecutively occurring upright P waves with consistent P wave in at least selected portions of a sufficiently long lead II rhythm strip. This is very different than the phenomenon of a wandering atrial pacemaker, in which several beats occur with one P wave shape, followed by a gradual shift for the ensuing consecutively conducted beats to a second or third P wave shape—ultimately returning to the original P wave morphology.

This is consistent with the psychologic concept of a gradual shift in pacemaker site from different places in the atria. In contrast to sinus mechanism rhythms and wandering pacemaker, P wave morphology in the Figure shown here is completely different from beat to beat. This is most consistent with the entity known as MAT, although admittedly the overall heart rate is not as rapid as the name of this entity implies. Although most often seen in long-term smokers with chronic pulmonary disease, MAT may also occasionally occur in non-smokers. The clinically important point in this case is that despite constant alternation of atrial impulse sites, atrial contraction is maintained, such that anticoagulation of this rhythm is not essential as it would be if an elderly patient with acute non-hemorrhagic stroke presented with atrial fibrillation.

Why Aren’t We Mad? Variations in the Label Information of the 10 Most Commonly Purchased Herbs

Blood Pressure in Acute Ischemic Stroke: When More May Indeed Be More