Home » ECG Review: Concealing the Cause

ECG Review: The Cause of T Wave Inversion?

ECG Review: Bradycardia with a Cause

Rectal Colonizing E. coli Cause Most Infections Following Transrectal Biopsy of the Prostate 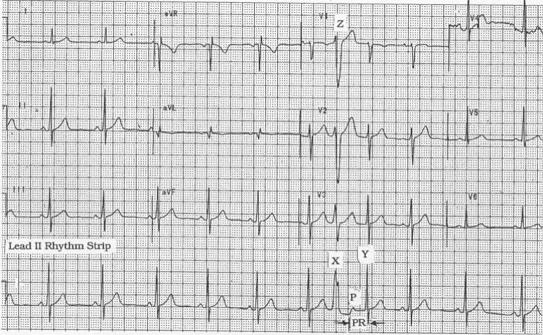 Clinical Scenario: The 12-lead ECG and accompanying rhythm strip in the Figure were obtained from an asymptomatic and otherwise healthy 53-year-old man. What two things are unusual about the beat marked X? Did first degree AV block suddenly develop for the following sinus-conducted beat (beat Y)?

Interpretation: The ECG in the Figure shows normal sinus rhythm. With the exception of the beat marked X and an isolated Q wave in lead aVL that is probably incidental, this is essentially a normal tracing.

The beat labeled X in the rhythm strip is a PVC (premature ventricular contraction). The first somewhat unusual aspect of this beat is its morphology, as suggested by its appearance in simultaneously recorded leads V1, V2, and V3. The RS pattern of this PVC in lead V1 (beat Z) is consistent with a LBBB (left bundle branch block) morphology. While far from infallible, PVCs that manifest a "LBBB-like" morphology (deep S wave in lead V1; tall monophasic R wave in leads I and V6) are more likely to be of right ventricular origin. This is a less common origin of ventricular ectopy than the left ventricle, which tends to produce PVCs with a predominantly positive deflection in lead V1.

The most interesting aspect of the beat labeled X in the rhythm strip is that this PVC is interpolated. PVCs most often occur in the cardiac cycle at a point that prevents conduction of the next sinus impulse. This is because the ventricles are refractory to normal conduction immediately after the PVC. As a result, PVCs are usually followed by a short pause. The ventricles usually recover in time to conduct the next normally occurring P wave.

On occasion, a PVC may occur at just the right point in the cardiac cycle that allows the ventricles to recover sooner, and therefore in time to be conducted by the P wave that immediately follows the PVC. Thus, the PVC labeled X is interpolated. Instead of a pause, the next QRS complex (beat Y) occurs nearly on time. Note that although the P wave immediately following the PVC (labeled P) also occurs on time, its PR interval (ie, the PR interval preceding beat Y) is prolonged compared to all other PR intervals on the rhythm strip. This reflects the phenomenon known as "concealed" conduction, in which the PVC (beat X) partially conducts back toward the AV node enough to prolong conduction of the next sinus impulse (the P wave labeled P). There is no AV block. The clinical significance of interpolated PVCs is the same as that of any other PVC—which is negligible as an isolated occurrence in an asymptomatic and otherwise healthy adult.

Fish Story or Food for Thought?