Brain Natriuretic Peptide in the ICU

Brain natriuretic peptide (bnp), also called b-type natriuretic peptide, is mainly secreted by the cardiac ventricles during increased ventricular wall stress. BNP plasma concentration provides important information on the prognosis in patients with heart failure, myocardial infarction, and acute coronary syndromes without ST-segment elevation. Moreover, used in conjunction with other clinical information, rapid measurement of BNP in the emergency department improves the evaluation and treatment of patients with acute dyspnea. Added to that, recent data suggest that BNP concentration may be increased in a variety of critically ill patients and that it appears to be associated with poor outcome of sepsis. The objective of this essay is to briefly review currently available information about the usefulness of BNP measurement in the evaluation and treatment of critically ill patients.

Atrial natriuretic peptide was the first natriuretic peptide ever discovered and it is primarily produced in cardiac atria. Increased intravascular volume and increased atrial wall tension are the predominant stimulus, along with hormones and neurotransmitters such as endothelin or cathecolamines. C-type natriuretic peptide is found in endothelial and vascular smooth muscle cells and throughout the central nervous system. As for BNP, the name was given because it was first identified in extracts of porcine brain. However, this 32-amino acid peptide is mainly secreted in the ventricle during increased ventricular wall stress. It seems that gene expression and ventricular secretion of BNP occur more rapidly than those of atrial natriuretic peptide in an acute overload, indicating that the characteristics of the BNP gene expression are suitable for its possible role as an "emergency" cardiac hormone against ventricular overload.3

After being synthesized in the ventricle, the precursor of BNP (pro-BNP) is cleaved by a protease into BNP and N-Terminal-proBNP (the biologically inactive amino portion of pro-BNP). Three kinds of receptors have been described for natriuretic peptides: A, B, and C. The first 2 (members of the guanylyl cyclase receptor family) seem to mediate the peptides’ biological actions, while the third one is a clearance receptor. Natriuretic peptide removal from the circulation is also achieved through the enzyme endopeptidase.

The exact mechanism that regulates BNP production is unknown but cardiac wall tension and dilation play important parts. Therefore, intense exercise moderately raises BNP plasma level, while this increment is more pronounced in patients with left ventricular hypertrophy or heart failure. BNP plasma concentration also rises in pulmonary hypertension and in non-cardiac disorders associated with excess of fluid volume such as renal failure, liver cirrhosis with ascites, and primary aldosteronism. It has also been observed that BNP plasma concentration can be influenced by other non-cardiac disorders, as well as by drugs that inhibit its degradation (see Table 1, below). 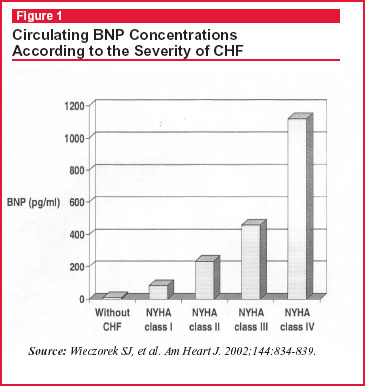 Considering these factors, BNP concentrations obtained from whole blood samples seem to be useful in the diagnosis of congestive heart failure (CHF) and in staging the severity of this disease. It has been shown that circulating BNP concentrations determined by a rapid fluorescence immunoassay increased with CHF severity, as determined by the NYHA classification system (see Figure 1), but were only statistically significant (P < .001) between individuals with and without CHF.4 With the use of a decision threshold of 100 pg/mL, the assay demonstrated 82% sensitivity and 99% specificity for distinguishing control patients and patients with CHF. This threshold has been used to improve evaluation and treatment of patients with acute dyspnea in the emergency department,5 reducing the time to discharge and the total cost of treatment.6

BNP also increases after ST-elevation myocardial infarction. The time course of the plasma BNP level could be divided into two patterns: a monophasic pattern with one peak at about 16 hours after admission and a biphasic pattern with 2 peaks at about 16 hours and 5 days after admission (see Figure 2).7 There were significantly more patients with anterior infarction, congestive heart failure, higher level of maximal creatine kinase-MB isoenzyme, and lower left ventricular ejection fraction in the biphasic group than in the monophasic group. This suggests that high BNP concentrations in the days following an acute myocardial infarction may predict a higher risk of depressed ventricular function. On the other hand, the initial rapid increase in BNP level suggests that the synthesis and production of BNP may be related to myocardial necrosis, local mechanical stress, or both, and not only to ventricular dysfunction.

Moreover, it has been shown that a single measurement of BNP, obtained in the first few days after the onset of ischemic symptoms, provides predictive information for use in risk stratification across the spectrum of acute coronary syndromes (myocardial infarction with ST-segment elevation, myocardial infarction without ST-segment elevation, and unstable angina).8 Patients with a BNP level above 80 pg/mL were significantly more likely to die, have a new or recurrent myocardial infarction, or have new or progressive heart failure than those with a level of 80 pg/mL or less. After adjustment for other independent predictors of the long-term risk of death, a BNP level of more than 80 pg/mL remained significantly associated with an increased 10-month mortality rate. This association between BNP and the long-term risk of death was independent of the presence or absence of clinical evidence of heart failure, as well as renal function, the troponin I level, electrocardiographic changes, and other known predictors of the risk of death in patients with acute coronary syndromes.

Taken together, these findings suggest that myocardial ischemia augments the synthesis and release of BNP, even in the absence of myocardial necrosis or preexisting left ventricular dysfunction. Reversible ischemia may transiently increase left ventricular wall stress, which may be sufficient to cause an elevation in B-type natriuretic peptide levels.

There are data showing that concentrations of atrial natriuretic peptide and BNP are markedly increased in many patients on a surgical intensive care unit (ICU).9 The largest BNP concentrations were observed in patients who underwent cardiac surgical procedures and also in patients with subarachnoid hemorrhage, a phenomenon previously described.10 Anyway, it has been observed that, in a combined medical and surgical ICU population, patients with cardiac dysfunction had a significantly higher level of BNP when compared to the non-cardiac dysfunction group: 516 ± 385 pg/mL (n = 26) vs 67 ± 89 pg/mL (n = 58) (P < 0.0001).11 A BNP cut-off value at 144 pg/mL exhibited a 92% sensitivity, 86% specificity and 96% negative predictive value. A further aspect is whether high plasma BNP levels are able to predict high pulmonary wedge pressure. A BNP cut-off value > 300 pg/mL also has high sensitivity for pulmonary capillary wedge pressure > 15 mm Hg but the specificity was lower when tested in a heterogeneous population of critically ill patients.12

A broad array of conditions associated with tissue inflammation and metabolic stress may be associated with reversible myocardial dysfunction.13 It may occur in up to 40% of cases of sepsis. This brings us to the question of whether BNP could reflect left ventricular dysfunction in this kind of patients. BNP increases significantly in patients with septic shock and BNP level seems to be inversely correlated with cardiac index.14 It has been confirmed in a recent study performing serial measurements of BNP plasma levels in septic patients and assessing myocardial systolic performance by fractional area contraction (FAC) using echocardiography performed on days 2 and 8.15 On day 1, plasma levels of BNP were significantly higher in the group of patients with myocardial dysfunction (FAC < 50%) (425 ± 184 vs 95.6 ± 30 pg/mL; P < .05).

This difference was present throughout the first 4 days after the onset of sepsis. Interestingly, plasma levels of myoglobin, creatinine kinase, and cardiac troponin I were also measured at the same time points. Plasma levels of these proteins did not differ at day 1 between patients with and without myocardial systolic dysfunction, but plasma levels of cardiac troponin I increased significantly at day 2 and day 3 in patients with myocardial dysfunction. The prognosis value of cardiac markers was also analyzed and these values were compared between non-survivors and survivors. BNP levels increased significantly at day 2 and 3 in the non-survivors group (905 ± 246 vs 181 ± 46 pg/mL; p < .05) whereas cardiac troponin I levels did not differ between non-survivors and survivors. A BNP plasma level cut-off value > 190 pg/mL could differentiate survivors from non-survivors with a sensitivity of 70% (CI, 55-85) and a specificity of 67% (CI, 51-83) (see Figure 3). According to these data, BNP plasma levels seem useful to detect myocardial dysfunction in critically ill patients, and high plasma levels appear to be associated with poor outcome.

Human recombinant form of BNP has revealed itself as a unique agent in the management of decompensated heart failure.16 Unlike the situation with nitroglycerin, its use has not been associated with tolerance. Compared to nitroprusside, the use of human recombinant BNP is not accompanied by an increased risk of thiocyanate or cyanide toxicity in patients with renal or hepatic dysfunction, respectively. Moreover, it seems to have a more positive effect on neuro-hormonal activation decreasing plasma aldosterone levels while producing no effect on rennin levels. Added to that, the hemodynamic improvements seen with this therapy are not secondary to increases in intracellular cyclic AMP and calcium, as occurs with the use of positive inotropes such as dobutamine, and therefore the use of human recombinant BNP does not result in any increased risk of ventricular arrhythmias. However, there are no data about the use of this drug in critically ill patients with reversible myocardial dysfunction.

BNP is mainly produced and released from the ventricles in response to increased wall stress and tension. The measurement of BNP plasma levels seems useful to detect myocardial dysfunction in critically ill patients, and high plasma levels appear to be associated with poor outcome although these results need to be confirmed in further studies. The potential advantages of BNP as a drug to treat heart failure in ICU patients will still have to be tested.

Has ICU Transfusion Practice Changed in the Past Decade?

Pharmacology Watch: ACE Inhibitors and Receptor Blockers: Which is Inferior?