Home » Is a Grapefruit a Day Good or Bad for the Heart?
Clinical / Integrative Medicine Alert

What is the Risk for Coronary Heart Disease in a Type 2 Diabetic Without Other Risk Factors?

Omega 3s and the Prostate: Good or Bad?

Aspirin: Good for the Heart, Better for the Pain

Grapefruit is a popular fruit worldwide because it is tasty, nutritious, and increasingly viewed as healthy. The original grapefruit was “white” and very seedy, but varieties have been selected to give seedless and more red cultivars.1 Health claims to date have focused on grapefruit’s alleged ability to promote weight loss. The Hollywood diet was the first of these in the 1930s, and various formulations have followed. Recent studies into the effectiveness of these have found little support for the claims made.2 Other basic and clinical research into grapefruit have focused on claims that grapefruit may protect against the risk of heart disease either due to the presence of antioxidants (especially vitamin C) or effects on blood lipids.1 At the same time, concerns have been raised about detrimental interactions between grapefruit juice and drugs, especially statins. Most of the research in this area has been conducted on grapefruit juice, and whether the fresh fruit is similarly involved remains poorly examined. Health care professionals should be aware of the most recent evidence regarding both grapefruit-drug interactions and its effectiveness in reducing the risk of cardiovascular disease.

One mechanism of reducing the risk of cardiovascular disease is through an antioxidant effect. Grapefruit has a high antioxidant potential, with red varieties having higher potentials than white.3 Many different bioactive compounds have been isolated from grapefruit and studied.1 Grapefruit is high in dietary fiber and several antioxidants, particularly phenolics.3 Naringin, one of the more abundant phenolics, has demonstrated lipolytic effects in animal and in vitro studies.4 Another related compound is hesperidin, which showed blood pressure reducing activity in vitro.5 A direct effect on serum lipid levels has been proposed, although evidence to support this is not yet available.

Several compounds called furanocoumarins have been isolated from grapefruit and shown to inhibit enzymes in the liver and intestines.6 The most important of these are CYP3A enzymes, as these metabolize several drugs in the intestine, reducing their bioavailability. These findings raise concerns that grapefruit interactions may lead to higher plasma concentrations of drugs either enhancing clinical effects or causing adverse reactions. These same compounds also may have anticholesterolemic effects.7

These studies led researchers to test the impact of different grapefruit cultivars in 57 hyperlipidemic patients who had undergone coronary bypass surgery at least 1 year previously and who were unresponsive to statin therapy.3 The subjects were randomly assigned to eat either one red or one white grapefruit or to a control group. Serum antioxidant activity increased significantly after red and white grapefruit consumption (36.4% and 17.8%, respectively; P not reported). In the red grapefruit group, TC, LDL, and TG decreased significantly relative to placebo (P < 0.0125, 0.005, 0.005, respectively). With white grapefruit, only LDL values decreased (P < 0.01). HDL levels increased in both groups, but not significantly. Weight, blood pressure, and heart rate did not differ between the groups. The absolute change in antioxidant levels was not sufficient to raise concerns such as those elicited by some vitamin E studies.

Another trial randomized 85 healthy obese adults (body mass index [BMI] 30-39.9 kg/m2) to consume 127 g of either fresh grapefruit (¼-½ grapefruit), grapefruit juice (4.5 ounces), or water (4.5 ounces) before three daily meals (called the preload phase).9 Individual meal plans were designed to provide 12.5% fewer calories than expended compared to pre-study consumption. All subjects followed the restricted calorie diet for 2 weeks without consuming grapefruit and then were randomized to one of the groups for 10 weeks. Fresh grapefruit were peeled and consumed without the rind. Average weight loss of 1 kg occurred during the initial 2 weeks and this increased by 13.3% (P < 0.0001) during the preload phase. Average overall weight loss was 7.1% of initial body weight. The three groups did not differ significantly in weight loss, body fat composition, blood pressure, glucose, insulin, TC, LDL, or TG levels. Statistically significant increases in HDL levels occurred between the fresh grapefruit group (6.2%, P = 0.003) and grapefruit juice group (8.2%, P = 0.009) compared to control (3.7% decrease).

The most recent RCT randomly assigned 74 healthy overweight adults (BMI 25-45 kg/m2) to either a group consuming half a fresh grapefruit 15 minutes before meals or a control group.4 The grapefruit was peeled and all portions consumed, including the pith. All participants consumed their usual diet, except that fruit and vegetables containing similar polyphenols to grapefruit were restricted. Everyone was provided a multivitamin, multimineral supplement. The study included a 3-week washout period and a 6-week intervention period. The primary outcome of the study was body weight, with blood pressure, heart rate, and lipid profile (TC, LDL, HDL, TG) being secondary outcomes. Although statistically significant changes from baseline occurred for blood pressure and lipid profiles, these did not differ significantly between groups.

Concerns about drug interactions arose from an unexpected observation. In a study investigating interactions between a calcium channel blocker (felodipine) and alcohol, grapefruit juice was used to mask the ethanol taste.10 Drug plasma concentrations were 2-3 times higher than expected.11 This is now known to be due to furanocoumarins present in grapefruit, which can degrade up to 50% of intestinal CYP3A enzyme. When consumed in usual dietary amounts, grapefruit juice selectively inhibits intestinal CYP3A enzymes and not those found in the liver.12 The inhibition is persistent, being found to last at least 3 days.11 However, people vary widely in their levels of CYP3A, leading to much individual variation in the extent of this interaction. Table 1 shows the impact of grapefruit juice on serum levels of several drugs metabolized via these enzymes. However, the practical significance of these interactions continues to be debated, and is likely more significant for juice than whole fruit due to a volume effect. 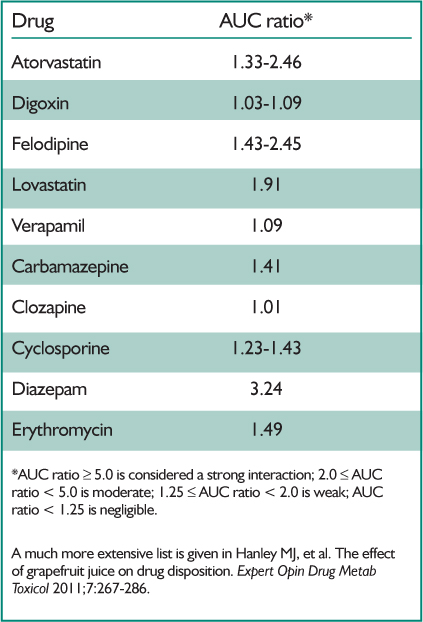 Several studies have shown that grapefruit significantly changes the serum concentrations of ingested drugs. However, such findings do not necessarily mean that these changes are clinically significant.12 Many of these drug-monitoring studies involved large volumes or highly concentrated grapefruit juice, leading to calls for studies of “real world” consumption.12 The first RCT to examine this question was published in 2011, funded by the Florida Department of Citrus. One hundred and thirty patients already receiving atorvastatin (Lipitor, 10, 20, or 40 mg/day) for an extended time were randomized to two protocols. Both groups added 10 ounces pure grapefruit juice daily for 90 days. Group A did not change their dose of atorvastatin, while group B reduced the dose by 50%. After 90 days, serum atorvastatin was 19-26% higher in group A and 12-25% lower in B (P < 0.01 between the groups), while TC and LDL were unchanged in A and higher in B (P < 0.002 and 0.001, respectively). Body weight, blood pressure, heart rate, TG, and HDL did not differ between the two groups. The actual increases in group B levels were 4% TC, 23% TG, and 9% LDL. Liver and muscle function tests revealed no detrimental changes. The authors concluded that while some changes were statistically significant, they were not clinically significant.6

With recent work identifying furanocoumarins as the CYP3A inhibitors, a method of removing 99% of these from commercial grapefruit juice has been developed.12 Such juice does not significantly alter the bioavailability of felodipine. Furanocoumarin-free commercial juices are currently being developed.

Grapefruit contains numerous phytochemicals that have been found to have a range of biological activities. The fruit, particularly red grapefruit, is high in antioxidants. Although many claims are made about grapefruit’s effectiveness in promoting weight loss and reducing the risk of heart disease, recent studies generally have not provided supporting evidence. Only a small number of studies have been conducted in this area, but grapefruit would appear to be a generally healthy fruit rather than having specific therapeutic effects.

Several drug-juice interactions occur, although normal consumption of grapefruit, rather than high volumes of juice, rarely appears to cause clinically significant interactions. Precise volume recommendations are rarely given, though 6-8 ounces per day is sometimes suggested. A complete list of drugs and their susceptibility to this interaction is available.12

Grapefruit is low in calories; high in vitamin C, fiber, and antioxidants; and nutritious. It should be enjoyed as part of a heart-healthy diet and lifestyle. Patients stabilized on medications can consume a fresh grapefruit or a 10-ounce glass of grapefruit juice without fear of major adverse effects. Those taking drugs metabolized by intestinal CYP3A systems and with low oral bioavailability or a narrow therapeutic index should limit their consumption of grapefruit and grapefruit juice. Patients who have had difficulty stabilizing on a suitable dose of such medications should probably avoid grapefruit. People on medications such as those in Table 1 should avoid consuming large amounts of grapefruit.

Walnut Consumption and Type 2 Diabetes Risk: The Importance of Associations