Guest Column by Robert Hatcher, MD: Numbers matter when it comes to contraception

Guest Column: What's in a name when it comes to birth control?

What is your practicen when it comes to DMPA?

Check your counseling when it comes to teens

Numbers matter when it comes to contraception

It was my privilege to be on the Williams College Board of Trustees with a remarkable man, Faye Vincent. After graduating from Williams and from the law school at Yale, he became a successful lawyer and then president of Columbia Pictures, which at that time was owned by Coca Cola. So he was also a vice president of Coca Cola. Later on, he became commissioner of Major League Baseball.

On the board at Williams, he knew more about the numbers that were of importance to that school than any member of the board. He brought numbers into the discussion of many issues.

From Faye Vincent I learned this truth: "If you don't understand the numbers, you don't understand the enterprise." For example, there was concern raised by some students that there were more square feet of space allocated to sports for men than women. THIS WAS TRUE. Vincent pointed out, first, that more sports for men required large fields. Second, he provided data showing that more intercollegiate sports were offered for women at Williams than at almost all other schools. Third, he demonstrated with numbers that there were more square feet of space allocated to women's sports at Williams than at any college or university in the entire country! This response immediately resolved the issue as far as the board was concerned, and it allayed the concerns of the students who had raised the issue.

What's in a number?

It is up to each individual to understand the numbers affecting our habits, career options, educational opportunities, health, happiness, and relationships. Then we must act upon those numbers that impact us personally.

Some important numbers must be simplified to a certain extent if they are to be at all helpful. Consider this approach inspired by Claude Burnett, MD, MPH, district health director of the Northeast Health District of Georgia, a 10-county district surrounding Athens, GA, when talking with patients about contraceptive effectiveness:

• If I were to tell you that the failure rate for women using a small contraceptive implant (Nexplanon) that is placed under the skin was 0.05%, you might say, "So what?" You might say that 0.05% is not a number that speaks to you except, perhaps, that it is very, very small. 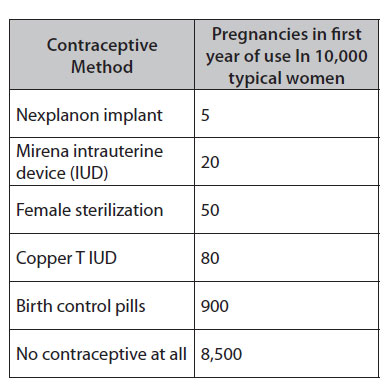 • What might really stop you in your tracks, if you were trying to avoid an unwanted pregnancy, is the fact that the first-year failure rate while using pills is 9%.1 (See how those three numbers might be presented in an even more understandable manner in graphic, above.)

You now can see why more and more women are choosing to use the long-acting reversible contraceptives (LARC methods), such as Nexplanon, the levonorgestrel IUD (Mirena), and the copper IUD (ParaGard). Numbers do matter!

How to boost use of HPV vaccine in boys

Guest Column by Robert Hatcher, MD: Numbers matter when it comes to contraception