Effect of Antibiotic Resistance on Prevention of Surgical Site Infections

Assay for Detection of Zika Virus in Urine

SYNOPSIS: The CDC recommends incorporating the Cepheid Xpert MTB/RIF assay in the management of patients with suspected pulmonary tuberculosis.

SOURCE: Centers for Disease Control and Prevention. Availability of an assay for detecting Mycobacterium tuberculosis, including rifampin-resistant strains, and considerations for its use  United States, 2013. MMWR 2013;62(41):821-824.

In 2009, CDC recommended that testing for Mycobacterium tuberculosis infection include nucleic acid amplification (NAA) testing. CDC indicated that NAA testing which should be performed on at least one (preferably the first) respiratory specimen from patients with suspected, but unproven, pulmonary tuberculosis. This was not to replace the need for culture, which should also be performed.

The Cepheid Xpert MTB/RIF assay for detection of Mycobacterium tuberculosis complex (MTBC) DNA and for mutations associated with rifampin resistance in unprocessed sputum and concentrated sputum specimens was approved by the U.S. FDA in August 2013. This NAA system utilizes a disposable cartridge together with the Cepheid instrument and is easy and simple to use. CDC has now outlined "interim practical considerations" for incorporation of the Xpert MTB/RIF assay into diagnostic algorithms for the diagnosis of pulmonary tuberculosis (See Tables, p. xx; p. xx). 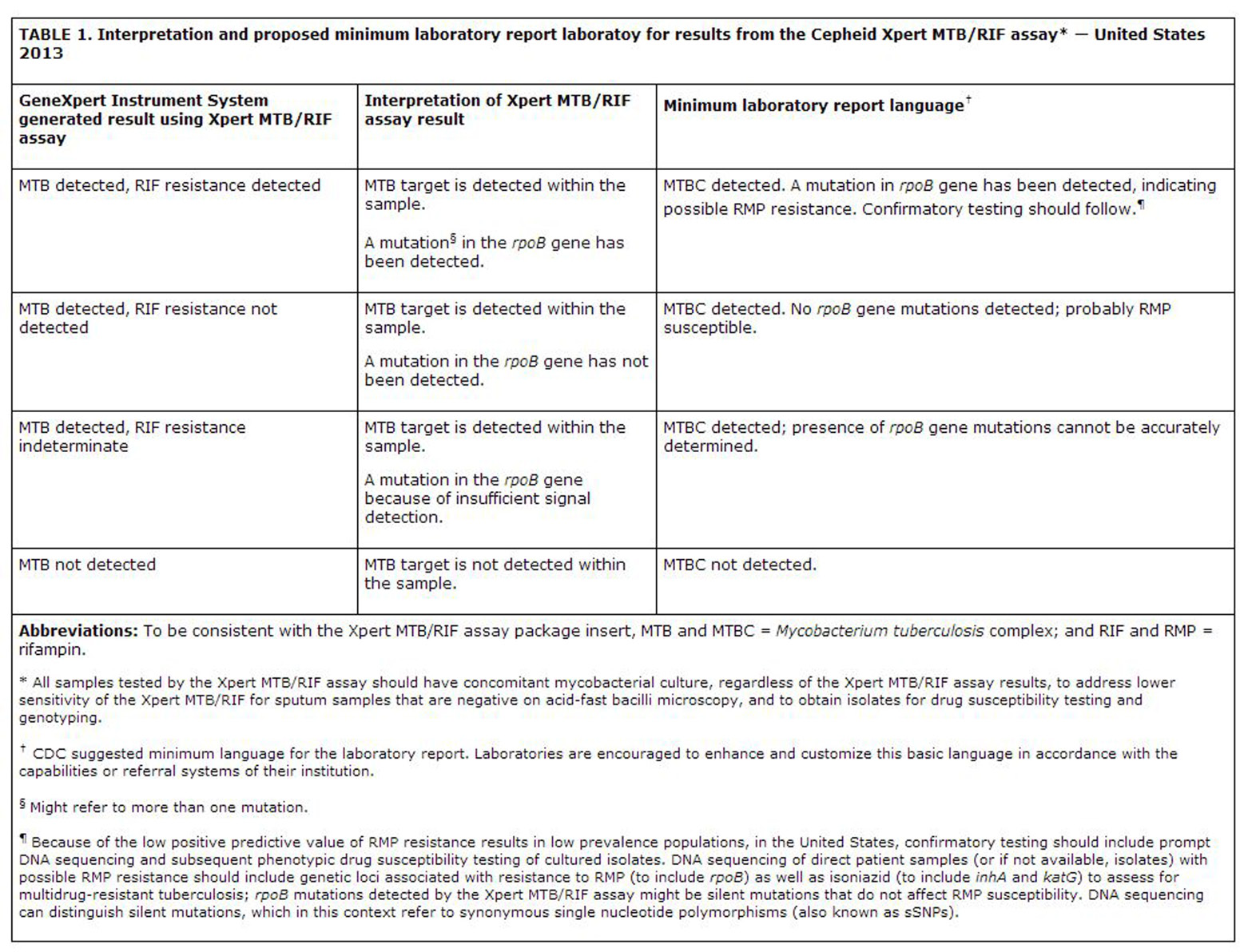 NAA testing, because of its sensitivity and rapid turnaround time, may avoid delays in the diagnosis and treatment of tuberculosis, especially in patients with negative sputum smears. It may also help to avoid unnecessary isolation, treatment and contact investigation. As stated by CDC: "Three sputum specimens, each collected 8-24 hours apart, with one being an early morning specimen, should be collected to inform decisions regarding the discontinuation of precautions for patients with suspected TB in health-care settings. For patients with a diagnosis of TB, decisions regarding discontinuation of precautions should be based on microscopy (i.e., three consecutive negative smears) and other clinical criteria."

In a footnote to Table 1 in this article, CDC warns that "rpoB mutations detected by the Xpert MTB/RIF assay might be silent mutations that do not affect rifampin susceptibility" and indicate this is another reason for gene sequencing in order to distinguish silent (synonymous) single nucleotide polymorphisms. A recent study, however, found that the Xpert MTB/RIF assay could detect "occult" rifampin resistance  i.e., resistance not detected by phenotypic testing and that this finding may predict failure of antituberculosis therapy with rifampin containing regimens. 1,2 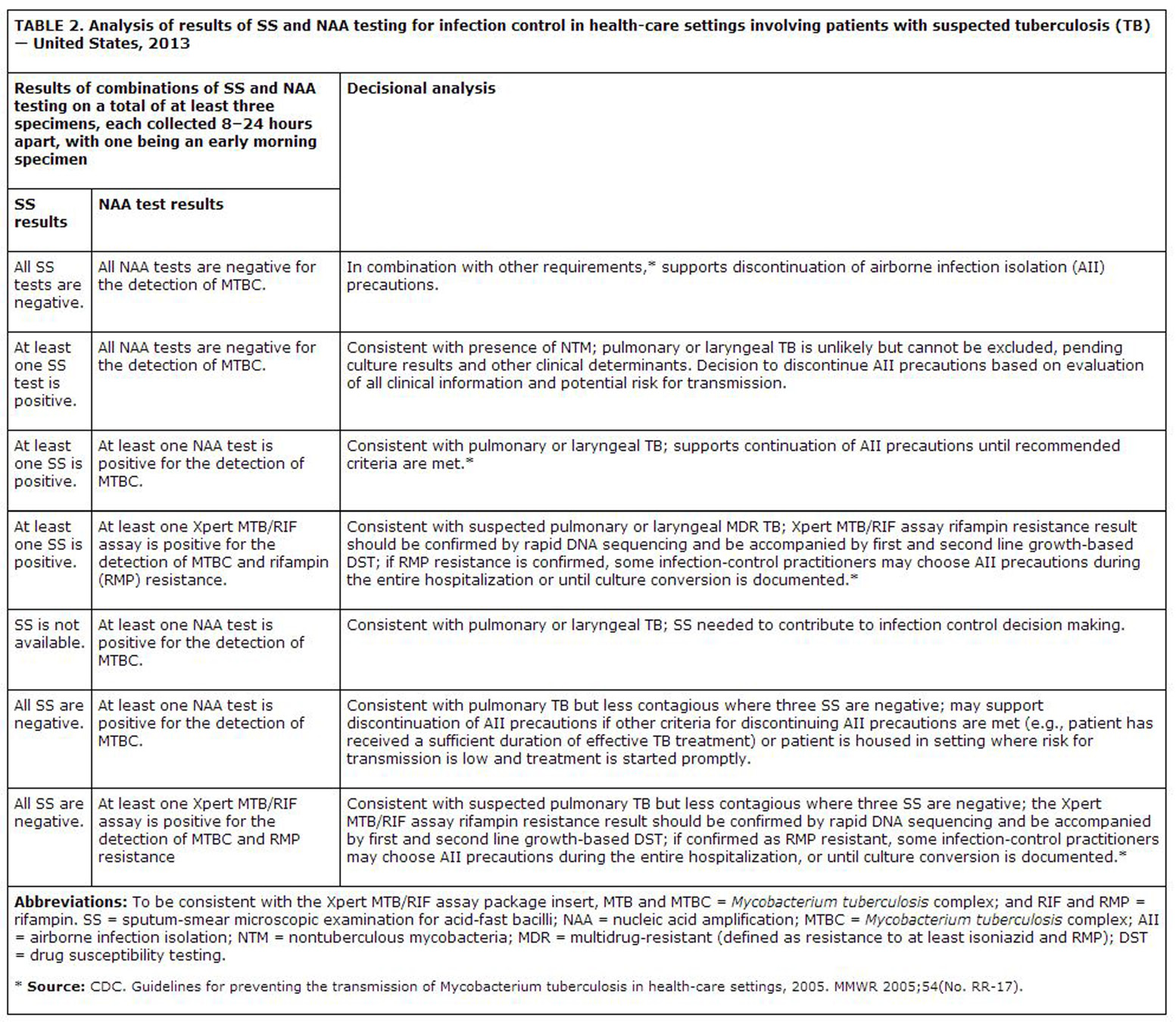 Drug-resistant E. coli in Women with Acute Cystitis in Canada