Home » Did MD fail to act on test results? Successful suits are occurring!

Did MD fail to give new treatment? It might be just the evidence patient needs to sue

Don't fail to follow up on findings: Avoid suits

Are pediatric drug errors occurring in your ED? Act now before tragedy strikes

Too many assumptions, too little communication'

Claims alleging physicians failed to follow up on test results are on the rise. To reduce risks, document the following:

 verbal discussions that occur at handoffs;

 conversations with patients about test results.

Dr. A, an internal medicine physician, refers her patient with ongoing gastrointestinal distress symptoms to Dr. B, a gastroenterologist on staff at the same institution. Dr. B suspects possible colitis and orders a colonoscopy.

The colonoscopy is performed by Dr. C, whose operative note and positive findings are available in the medical record, to which Drs. A and B have access. However, no separate email or other alert is sent to Dr. A or Dr. B.

"Neither check the medical record for the test result. As a direct consequence, the patient's condition goes untreated for several months," says Amy E. Goganian, JD, an attorney with Goganian & Associates in Needham, MA.

Shortly thereafter, the patient files a claim against Drs. A, B, and C for failing to follow up on her positive test results. This scenario is a typical one of many recent malpractice claims handled by Goganian's firm.

Molly Farrell, vice president of operations for MGIS Underwriting Managers in Salt Lake City, UT, says, "Lack of follow-up on testing occurs much more often than it should. It's one of the areas we encourage physicians to monitor closely in order to improve outcomes and manage risk." 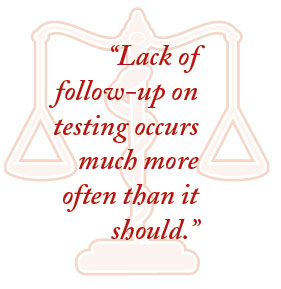 Bobbie S. Sprader, JD, an attorney at Bricker & Eckler in Columbus, OH, has seen several cases involving an incidental finding on an X-ray taken during a hospitalization for an acute surgical condition. In one case, the surgeon handling the acute condition deferred follow-up to the patient's primary care physician. The surgeon assumed that the hospital would send the primary care physician a copy of the report and that he would see it and act upon it. "It was never clear whether the primary care physician ever got the report, but he definitely did not act upon it, as it went completely unaddressed," says Sprader.

The surgeon took the position that because the finding was non-surgical and non-acute, it fell outside of his duties to the patient. The primary care doctor took the position that he did not order the test and did not even know that it had been done. "There were too many assumptions, and too little communication," says Sprader.

Here are some practices that could prevent successful lawsuits alleging failure to follow up on test results:

• Physicians should monitor patients for signs and symptoms associated with drug toxicity.

In one malpractice claim, a patient was prescribed a medication for treatment of bipolar disease. Farrell says, "The medication had several potential side effects, the most dangerous of which is aplastic anemia. Subsequently, the patient did develop aplastic anemia."

The physician ordered the blood levels, the results were elevated, and the physician didn't act upon the elevated results for two years. "Had the physician reviewed these timely, he would have had an opportunity to address the prescribed dosage," says Farrell. "The case was resolved in the low six figures, due to the off-set of the patient contribution."

Even though the subsequent litigation revealed that the patient consistently took more medication than was prescribed, adds Farrell, the physician was faulted for failure to follow-up on the test results.

• When test results of any kind are positive, lab personnel should document that the results were communicated to a clinician.

While most of the time the physician who ordered the test will review the results, acute and unexpected findings still deserve special attention, says Sprader. "The [lab personnel] would be well-served by stating right in the report that Dr. [Name] was advised that [finding] at [time]," says Sprader.

Farrell reports that members one radiology group saw a significant drop in their failure to diagnose claims after they began sending a notice to patients advising: "You recently had an X-ray read at X hospital and the results may require follow-up. Please take this report and share it with your primary care physician at your next visit."

The note ensures that even patients seen in a clinic setting notify their physician about recent films. "Often patients remember that the X-ray ruled out pneumonia, but don't recall the small mass that requires further work-up," says Farrell.

• Physicians should document verbal discussions that occur at handoffs.

"As a general rule, whoever ordered the test is responsible for [addressing] any abnormalities found, until an official hand-off occurs," says Sprader.

If the patient is hospitalized, the physician could document, for example, "Spoke with patient's PCP, Dr. Smith, who will follow up on [finding] as outpatient. Advised patient to see Dr. Smith in follow up in 2 weeks to address his [finding], indicates understanding."

Physicians sometimes do this step in writing, such as "Dear Dr. Smith: During a recent admission, patient was found to have [finding]. I have enclosed a copy of the report and will refer her back to you for further work-up for this finding."

However, "passing the baton" by letter leaves open the possibility that physicians can later claim they never received the information, says Sprader.

Dan Groszkruger, JD, MPH, principal of San Diego-based rskmgmt.inc, once represented a primary care physician whose medical group adopted a strict rule to avoid failure-to-notify situations. "This physician made it a practice to call every new patient and to call every patient whose test results came back abnormal, in the evening of the same day," he says.

Because the physician's office staff knew about this practice, extra care was invested in double-checking the accuracy of telephone numbers or alternative contacts. "Calling patients after episodes of care clearly goes beyond a physician's standard of care," acknowledges Groszkruger. "But it may represent an emerging best practice, applicable to some medical specialties."

Depending upon the physician's specialty, personal telephone calls to patients might be impractical, and physicians have to determine what criteria merits a call, says Groszkruger. "However, the very best way to prevent unhappiness or dissatisfaction leading to a lawsuit is to impress each patient that the physician really cares about the patient's welfare," he emphasizes. (See related stories on tracking systems, below, and proving patients were informed of results, below.)

Patient is no-show, has bad outcome? Successful lawsuit could occur