Are All Plant-based Diets Created Equally (in Terms of Health Benefits)?

The Breadth of Evidence Favoring a Whole Foods, Plant-based Diet

Although very interesting research exists for the effects of isolated phytonutrients on many different disease processes, just as compelling is the resurgence in research on whole plants or whole food approaches to promoting health or treating disease (e.g., investigating a multi-component, plant-based dietary pattern and disease vs investigating the consumption of beta-carotene and disease). This article will review the evidence for a plant-based dietary approach in three cardiovascular conditions, concluding with some remarks about the recent results about the ability of the Mediterranean diet to prevent cardiovascular events in high-risk people.

Nutrition, lifestyle, and heart disease have been studied extensively. Despite improvements over the past several decades in cardiovascular mortality rates, cardiovascular disease remains the leading cause of death in the United States. Cardiovascular disease will kill one out of every three Americans and is associated with more than $300 billion in related costs annually.1 With dramatic recent increases in overweight, obesity, and diabetes among the population, it is likely that coronary artery disease, stroke, and intermediate risk factors, including hypertension and hyperlipidemia, will continue to be one of the most common causes of health care utilization.

For at least half a century, multiple studies have linked dietary patterns and dietary components with incidence of cardiovascular disease. Multiple studies have suggested that both across populations and within populations those groups consuming more plant-based foods than animal-based foods have lower rates of heart disease.2-6 Concurrently, migrant studies7 have shown that cardiovascular disease is significantly influenced by environment. It is against this background that we investigate the evidence in favor of whole-food, plant-based diets.

Whole-food, plant-based diets refer to dietary patterns based on unrefined whole grains, fruits, vegetables, legumes, and nuts with reduced or eliminated intake of animal foods, including meat, dairy foods, and eggs, as well as reduced or eliminated intake of highly refined plant foods such as white flours, sugars, and oils. Although much of the research cited below represents “vegetarian” or “vegan” diets, it is likely that any benefits from these diets are from the increased consumption of the whole foods mentioned above. This diet has supporting evidence such that now it is possible to make an argument in favor of it for a broad range of outcomes that represent relatively consistent scientific findings. Both authors of this article have attempted to do this in The China Study,8 a book written for the public. There is a particularly strong depth of evidence in favor of plant-based diets for prevention of cardiovascular disease, but the overall merits of a whole-food, plant-based diet is beyond the scope of this article.

It has been observed repeatedly that vegetarians, and especially vegans, have a lower blood pressure than meat eaters. One study found that 15% of male meat eaters reported themselves as having a diagnosis of hypertension, whereas only 5.8% of their vegan counterparts said the same.9 For women, the story is similar: 12.1% of female meat eaters had hypertension but only 7.7% of female vegans. Much of the difference was due to the fact that the vegans were slimmer than meat eaters, but even after statistically eliminating the effect of body weight, vegans still had a significantly lower rate of high blood pressure. Another study of Seventh-Day Adventists in California found that vegans had a stunning 75% reduction in the prevalence of hypertension compared to nonvegetarians.10 Another study followed 500 patients participating in a 12-day diet program; after 12 days of eating a low-fat, plant-based diet, the patients’ blood pressures dropped by 6%.11 Other researchers found that a more moderate vegetarian diet lowers systolic blood pressure by 5 mmHg in 6 weeks along with a modest drop in diastolic blood pressure. When subjects went back to their omnivorous diets, the blood pressure increased.12,13

One recent review of 27 randomized, controlled trials and observational studies in the American Journal of Cardiology found that people who eat plant-based diets have lower cholesterol levels.14 Trials putting patients on vegetarian or vegan diets repeatedly have shown that cholesterol levels go down.14 In one study, researchers studied three groups for a month: the first group (control) ate a very low-saturated fat, plant-based diet; the second group ate the control diet and took 20 mg of lovastatin daily; and the third group ate a low-dairy diet that cut out almost all animal foods and included more fiber and plant foods previously found to lower cholesterol.15 All groups ate a vegetarian diet, but the low-dairy diet was dramatically different in terms of protein content; it contained almost no animal protein, whereas the control diet had lots of protein from dairy sources. The result was that LDL cholesterol dropped 8.5% in subjects on the vegetarian, dairy-rich control diet alone, 33.3% on this control diet plus a statin, and 29.6% on the almost fully plant-based diet. The almost fully plant-based diet, using healthy cardioprotective components, was nearly as effective as a dairy-rich vegetarian diet plus medication and was far better than the moderate vegetarian diet alone at lowering LDL cholesterol.15

Historically, it has been well known that heart disease strikes populations of Western countries far more commonly than traditional cultures.16,17 In fact, deaths from heart disease before the age of 65 were very rare in rural China around 1980.16 In addition, within populations of Western countries, those groups that eat a more plant-based diet have a lower risk of cardiovascular mortality.5,10 Perhaps the effect is mediated by changes in hypertension, cholesterol levels, or even endothelial function. The dilatory arterial function was compared between vegetarians and non-vegetarians with both a mechanical and chemical challenge (a tourniquet test and administration of nitric oxide). Lin et al found that the arteries dilated more in the vegetarians in response to both challenges.18

Most persuasively, it has now been shown that coronary heart disease can be reversed using a dietary approach. Two physicians, Dean Ornish and Caldwell Esselstyn, both have conducted trials of people with known heart disease and both have shown that interventions centered on low-fat, whole foods, plant-based diets can reverse blockages in coronary arteries and improve blood flow.19,20 Esselstyn included some cholesterol-lowering medicine in the intervention and Ornish included several other lifestyle components (See Table 1). Diets in both of these trials eliminated meat and oil and minimized dairy foods. No other diet-based trials, including those utilizing more moderate interventions, have ever reversed heart disease so substantially. 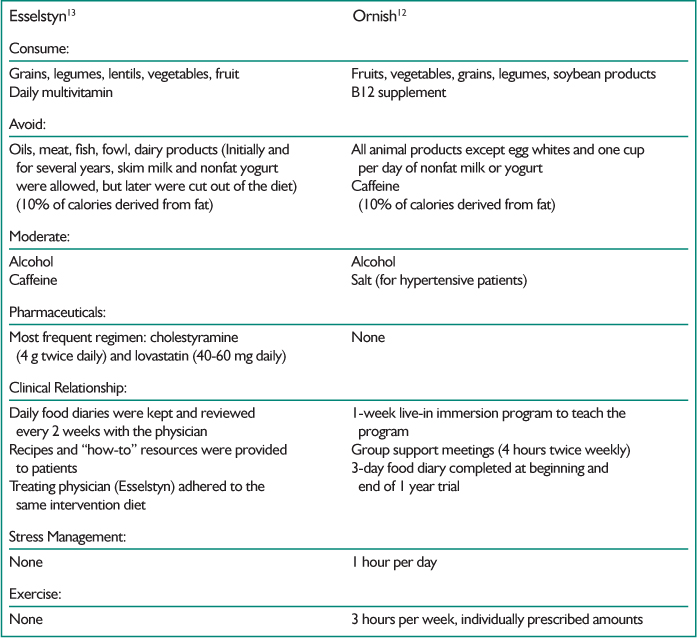 In the past two decades, significant research has been published regarding the Mediterranean diet, which has been popular both among laypeople and the scientific community. As described in the landmark Lyon Diet Heart Trial,21 the Mediterranean diet is composed of increased bread, green and root vegetables, fruit, and fish, and decreased meat along with an emphasis on fat sources higher in unsaturated fats, including canola oil and olive oil. In practical terms, it is a more moderate diet emphasizing plant-food intake that does not attempt to eliminate meat or oil. The Lyon Diet Heart Trial, a randomized, controlled trial conducted in the 1990s, reported that patients who survived a heart attack could reduce their risk of cardiac death or another nonfatal myocardial infarction by about 70% in the first 4 years by following the Mediterranean diet.22 More recently, a controlled trial randomized 7447 Spanish people at high risk of cardiovascular disease to a Mediterranean diet with supplemented extra virgin olive oil, Mediterranean diet with 30 g of mixed nuts per day, or a control low-fat diet.23 The participants were followed for a mean of 4.8 years and were analyzed for major cardiovascular events (myocardial infarction, stroke, or cardiovascular death). The Mediterranean diet with olive oil group had hazard ratio of 0.70 (95% confidence interval [CI], 0.54-0.92) and the diet with nuts group had a hazard ratio of 0.72 (95% CI, 0.54-0.96) compared to the control diet; this result equates to a relative risk reduction of approximately 30%.23 This relative risk reduction is less than might be expected from patients adherent to the no added oil, plant-based diet that has previously been demonstrated to halt disease progression or even reverse disease in those with advanced heart disease.19,20 In summary, the Lyon Diet Heart Trial and the Spanish Mediterranean diet study show that for both secondary and primary prevention, respectively, of cardiovascular disease, a moderate (i.e., Mediterranean) plant-based diet will yield moderate benefits.

Broadening the clinical view of a nutritional approach to cardiovascular disease treatment and prevention, there are numerous studies documenting the benefits of a whole foods, plant-based diet. Improvements in hypertension and hyperlipidemia are seen with a vegetarian (and vegan) diet, whereas stricter dietary approaches may be able to prevent and treat, even reverse, coronary artery disease. Dietary approaches should be central to heart disease treatment and whole-food, plant-based diets rich in whole grains, fruits, vegetables, and legumes are the most appropriate dietary recommendations based on available science. A Mediterranean diet may be more palatable and acceptable to many patients, but with the goal of halting or reversing disease we advise discussing the Ornish and Esselstyn diets, as they are likely to be more effective for adherent patients.

2. Artaud-Wild SM, et al. Differences in coronary mortality can be explained by differences in cholesterol and saturated fat intakes in 40 countries but not in France and Finland. A paradox. Circulation 1993;88:2771-2779.

8. Campbell TC, Campbell TM. The China Study: The Most Comprehensive Study of Nutrition Ever Conducted and the Startling Implications for Diet, Weight Loss, and Long-term Health. Dallas, TX: BenBella Books; 2005.

15. Jenkins DJ, et al. Direct comparison of a dietary portfolio of cholesterol-lowering foods with a statin in hypercholesterolemic participants. Am J Clin Nutr 2005;81:380-387.