Drug diverter gets 39-year sentence for infecting patients with HCV

Patient: He has to answer to his God’ 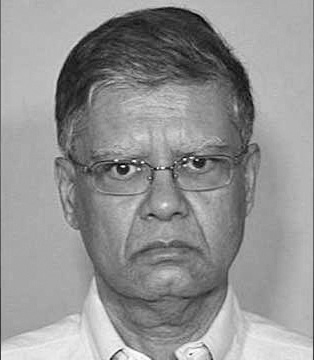 In lieu of patient safety signs and infection control reminders, every ambulatory clinic in the country should just post the scowling countenance of one Dipak Desai, defrocked MD, who will spend the rest of his life in prison for practicing in flagrant disregard of injection safety.

It may well give pause to those who are greedy or ignorant enough to reuse and misuse vials, needles and syringes. Maybe a single outbreak would be averted, perhaps many more, for to look upon that face is to see the "hubris"1 that a Desai colleague described or know the "chiding"2 an anesthesiologist faced for suggesting a patient needed more of the precious propofol.

Desai’s two endoscopy clinics were in Las Vegas, where patients may fairly expect the gambling to end when they seek health care. In this case, which came to harsh light in 2007 and 2008, nine patients were infected with hepatitis C virus and two died. More than 100 cases of HCV were possibly acquired in the outbreak, which resulted in some 65,000 patients recommended for testing.

On Oct. 24, 2013 the 63-year-old Desai was sentenced to life in prison, having been found guilty of 27 criminal charges including second-degree murder, according to published reports.3 Prosecutors successfully argued that he oversaw a "penny-pinching" practice where patient safety was trumped by profit. The practices described included using single-dose vials on more than one patient, which can spread blood borne viruses from patient to patient.

Patty Aspinwall, who contracted HCV from a 2007 procedure at one of Desai’s now shuttered clinics, had a stoic reaction to the sentencing. "He has to answer to his God, and I have to continue living life the best I can." she told the Las Vegas Review-Journal.

She wears latex gloves when she cooks to protect her family, the newspaper reported.

Your patients are taking supplements, but will they stop before surgery?

Need to hire staff or get hired?