Intubation in the emergency department (ED) can immediately save lives, but that often doesn’t ensure favorable longer-term results, especially in older patients.

Those were the findings of a new study published in the Journal of the American Geriatrics Society.

The Brigham and Women’s Hospital-led research suggests that young and otherwise healthy patients clearly benefit from the breathing assistance, but that outcomes are generally less positive for older patients.

“A surprisingly large number of older patients who underwent intubation in the emergency department either died in the hospital or were discharged to a nursing home,” pointed out lead author Kei Ouchi, MD, MPH, of the Department of Emergency Medicine at BWH. “On average, one-third of patients over 65 who received intubation in the emergency department died in the hospital.”

To reach those conclusions, the study team conducted a retrospective study reviewing the outcomes of more than 41,000 adults age 65 and older who were intubated in 262 hospital EDs across the United States from 2008 to 2015. Of the intubations, 64% were in non‐Hispanic whites and 54% in women.

The results were somewhat unexpected, according to the authors, and included that:

In-hospital mortality following intubation was highest for patients older than 90 compared to other age groups, with 50% dying in the hospital and only 14% being discharged home.

The risks remained high in somewhat younger age groups, however, with 29% of patients between 65 and 74 dying in the hospital following emergency intubation, and only 31% being able to be discharged home.

“It's important that older patients, their families, and their care team are aware of this information and can use it to make informed, shared decisions about whether the patient should receive emergency intubation should such intubation be needed,” Ouchi emphasized. “It is difficult to make informed decisions on whether to provide intubation in older patients in an emergency because this is a very stressful and emotional time. Older patients, their families, and care providers are encouraged to make this decision before emergency situations requiring emergency department admission and intubation arise.”

The authors noted, “Simple, graphic representations of this information, in combination with an experienced clinician's overall clinical assessment, will support shared decision‐making regarding unplanned intubation.” 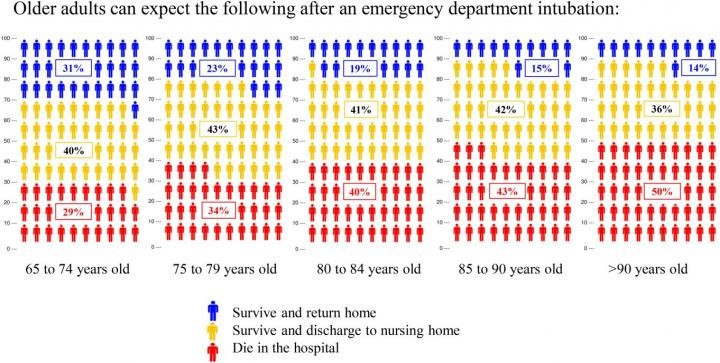 Get the latest in stroke with Stroke 2018: The Cutting Edge. Written and edited by leading experts, this 8-module digital resource will discuss key topics in stroke that will aid in diagnosing and treating stoke patients more quickly. Complete with valuable charts, images, and articles, this latest addition in our ongoing stroke series also offers 8 valuable stroke CME/CE, taking care of Joint Commission required credits in a single publication.