The reason for the inconsistency, according to a new report in Academic Emergency Medicine, has been the lack of evidence for the therapy’s effectiveness.

A Canadian study, led by St. Paul’s Hospital researchers in Vancouver, BC, sought to remedy that by determining whether administering H1a was associated with lower rates of progression to anaphylaxis in ED patients initially presenting with allergic reactions. 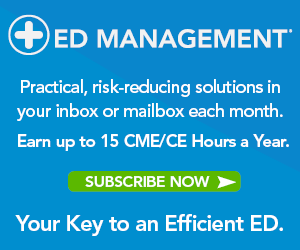 To do that, the team conducted a retrospective cohort study at two urban Canadian EDs from April 1, 2007 to March 31, 2012. Included were 2,376 consecutive adult patients with allergic reactions, but excluding those who presented with anaphylaxis, according to pre-specified criteria. Nearly 80% of the patients received H1a therapy.

Results indicate that 1.9% of the H1a group developed anaphylaxis, compared to 3.4% in the non-H1a-treated group, for an adjusted odds ratio (AOR) of 0.34.

In the subgroup analysis of 1,717 patients who did not receive H1a prior to EMS or ED contact, a similar association was observed, with an AOR of 0.26.

The study is especially significant because emergency care increasingly is sought for allergic reaction cases, especially those involving food. For example, a 2015 study of Illinois ED visits for severe food allergy reactions found that children of all races and backgrounds now are affected, with cases jumping up an average of nearly 30% over a five-year period. The report was published Annals of Allergy, Asthma & Immunology.

That study included discharge data from 1,893 ED visits for anaphylaxis at about 200 Illinois hospitals from 2008 to 2012.