OTTAWA, ONTARIO – A rule validated in Canada has the potential of reducing by a third the number of chest-pain patients routinely placed on emergency department heart monitors.

That’s according to a study published recently in the Canadian Medical Association Journal.

“Chest pain is one of the most common reasons people visit Canadian emergency departments, with around 800,000 visits a year,” explains lead researcher Venkatesh Thiruganasambandamoorthy, MBBS, MSc, an emergency physician at The Ottawa Hospital and an assistant professor at the University of Ottawa. “Between the two emergency departments at The Ottawa Hospital we see around 35 chest pain patients every day, and usually 25 are assigned to monitored beds. This rule would let us safely remove eight patients from these beds, freeing up the monitors for other patients.”

The study notes that about 70% of chest pain patients are monitored in EDs to detect arrhythmia, although previous studies have shown that the condition is rare, affecting fewer than 2% of patients complaining of chest pain.

In response, the researchers developed the Ottawa Chest Pain Cardiac Monitoring Rule, whereby patients can be removed if they have no current chest pain and if no significant abnormalities appear in the electrocardiogram reading. 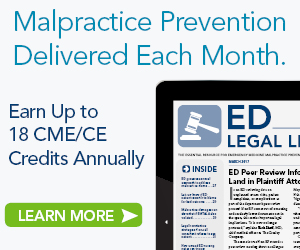 The monitor is usually removed after about eight hours, when patients are discharged home. The new rule allows removal of the equipment much earlier if a patient meets certain criteria. It also facilitates movement of those patients to non-monitored areas of the ED.

To verify the rule, researchers observed 1,125 patients presenting to The Ottawa Hospital emergency departments for chest pain between November 2013 and April 2015, with 796 of those ending up with monitors. Of those, only 15 experienced irregular heartbeat during their eight-hour stay.

Study authors point out that the rule was able to predict with 100% the patients who needed to stay on heart monitors, while indicating that 36% of those monitored during the study could have been safely removed from the equipment.

If hospitals use this rule, they have the potential to take many low-risk chest pain patients off heart monitors, Thiruganasambandamoorthy says. “We started using this rule in The Ottawa Hospital emergency departments a few months ago, and we’re watching the outcomes very closely,” he says. “We have also spoken to several emergency departments across the country who are excited about bringing this rule into their hospitals.”