MINNEAPOLIS – Emergency departments routinely treat hyperglycemia in patients, but one of the reasons for doing so – preventing repeat ED visits – doesn’t appear to be affected by the practice.

High blood glucose levels are frequently detected when providing emergency care, according to a report in Annals of Emergency Medicine, and the condition usually is treated to prevent short-term outcomes such as diabetic ketoacidosis, repeat ED visits, and hospitalization.

“If ED glycemic control, and thus the discharge glucose value, is not associated with short-term outcomes, then perhaps the most important intervention would be ensuring appropriate outpatient follow-up, with the goal to maintain long-term proper glycemic control,” suggest the authors, led by researchers from the Department of Emergency Medicine, Hennepin County Medical Center in Minneapolis.

Background information in the article notes that hyperglycemia and diabetes-related emergency visits make up about 1% of ED encounters. Often, the researchers add, moderate hyperglycemia is seen without concomitant acute illness. 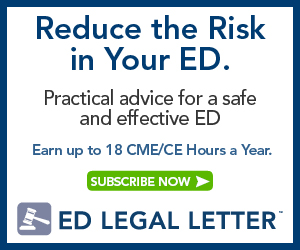 “Although most patients presenting with moderate hyperglycemia do not have diabetic ketoacidosis and are eligible for discharge after ED evaluation, approaches to caring for this common complaint are variable, without clear consensus,” the study team points out. There are no guidelines for ED care of hyperglycemia, and the care received by patients with hyperglycemia who are eventually discharged from the ED, and their short-term outcomes, have not previously been described, to our knowledge.”

To determine whether an association exists between discharge glucose and 7-day adverse outcomes, the researchers conducted a retrospective chart review at a high-volume urban ED. Patients were included if any glucose level was greater than or equal to 400 mg/dL and they were discharged from the ED. With a cohort consisting of 422 patients with 566 ED encounters, mean arrival and discharge glucose were 491 mg/dL (SD 82 mg/dL) and 334 mg/dL (SD 101 mg/dL), respectively.

Results indicate that in the 7-day follow-up period, 13% of patients had a repeat ED visit for hyperglycemia and 7% ended up being admitted, with two patients having diabetic ketoacidosis.

After adjustment for arrival glucose, whether a chemistry panel was obtained, amount of intravenous fluids administered, and amount of subcutaneous insulin administered, however, discharge glucose was not associated with repeat ED visit for hyperglycemia, according to the report. The adjusted odds ratio was 0.997 for repeat visits and 0.998 for hospitalization for any reason.

Because of that, study authors suggest, “Attaining a specific glucose goal before discharge in patients with hyperglycemia may be less important than traditionally thought.”