MARIETTA, GA – This year, the most frightening day of the year may come almost a month before Halloween. Or at least that may be the case for some medical practices.

In a recent survey from the medical software company NueMD, 31% of the 1,000 medical practices responding said they were not at all confident they would be prepared for the changeover to ICD-10 by Oct. 1, 2015.

More than half, 53%, said they were either significantly or highly concerned about any potential impact from the transition.

To help smooth process, CMS offered some information to providers, identifying common misperceptions about the transition to ICD-10:

So, what if you can’t submit ICD-10 claims electronically due to problems with the provider’s system? CMS offers free billing software that can be downloaded at any time from every Medicare Administrative Contractor (MAC).

In addition, in about half of the MAC jurisdictions, Part B claims submission functionality is on the MAC’s provider Internet portal. If worst comes to worst, your practice can submit paper claims, if the Administrative Simplification Compliance Act waiver provisions are met.

CMS also cites several studies suggesting that the cost of transition could be substantially lower than earlier projections, pointing out that “many EHR vendors are including ICD-10 in their systems or upgrades – at little or no cost to their customers. As a result, software and systems costs for ICD-10 could be minimal for many providers.”

Cancer Screening: Avoiding Too Much Of A Good Thing 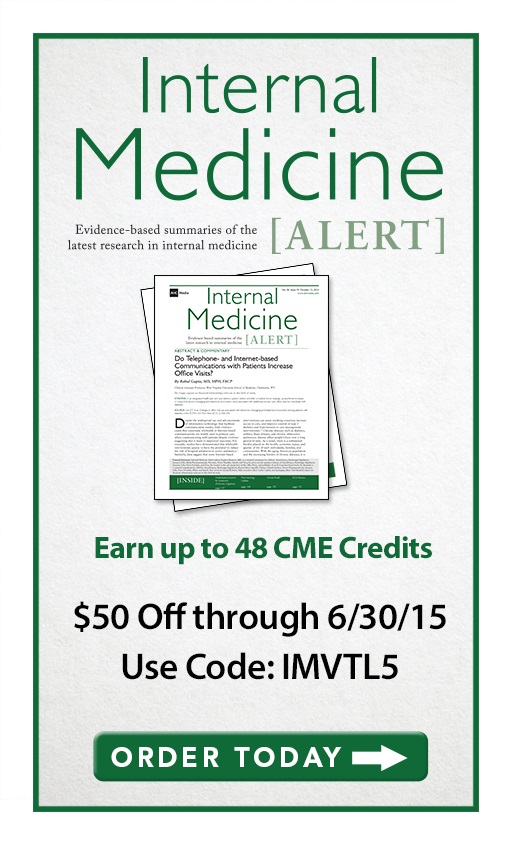 PHILADELPHIA – To screen or not to screen. That is the question for average-risk adults without symptoms for five common cancers: breast, colorectal, ovarian, prostate, and cervical.

"We found much common agreement on high value care screening among different organizations," said Tanveer Mir, MD, chair of ACP's Board of Regents and a member of ACP's High Value Care Task Force, which developed the review. "Our advice puts that agreement together in one convenient place for physicians and patients. Many major physician organizations are seeking to implement strategies that best optimize the known benefits and harms of cancer screenings."

"The largest harm that can result from overly intense screening is over-diagnosis and overtreatment," explained Wayne J. Riley, MD, MPH, MBA, president of the ACP.

In general, screening for the five cancers is not recommended in patients with a life expectancy under 10 years. Here is a summary of the other high-value recommendations:

MIAMI – If you find yourself worrying more and more about declining profits for your practice, you are not alone.

The Practice Profitability Index (PPI) finds that U.S. physicians are more than twice as likely to foresee eroding, not increasing, profits in 2014. Survey respondents reporting a negative outlook increased from 36% to 39% from 2013-14, while those with a positive view declined from 22% to 19%.

The PPI began in 2013 as part of a partnership between cloud-based health technology provider, CareCloud, and QuantiaMD, the largest social learning network for physicians. The report uses an interactive online survey and related discussion groups to gather insights on the state of medical practice in the United States, with the second annual PPI including responses from more than 5,000 physicians.

The survey found the biggest issues affecting finances include declining reimbursements (60%); rising costs (50%); requirements from the Affordable Care Act (49%); and the transition to ICD-10(43%).

”The past year has been a turbulent one for U.S. physicians,” write the authors of the report, which covers 2014. “Since the last PPI report, long- anticipated waves of reform – particularly the introduction of the Affordable Care Act – have begun to reach physicians and impact their daily lives. Others, most notably the transition to ICD-10 and meeting Meaningful Use Stage 2 guidelines, are now at hand. These stand to have significant impact on how physician practices operate.”

In terms of reimbursement, only 11% of the physicians responding said they expect a boost from payment models such as fee-for-value/accountable care contracts. Yet almost a third said they were facing the cost and hassles of replacing at least one element of their core technology platform in the year ahead – the biggest complaints were cost (36%); usability (31%); non-compliance with ICD-10/meaningful use (31%); and a lack of vendor innovation.

Furthermore, the portion of doctors spending more than one day a week on paperwork shot up between 2013 and 2014, from 58% to 70%. Nearly one-quarter (23%) spend more than 40% of their time on administration, up from 15% last year, according to the report.

For an increasing percentage, 21% in 2013 compared to 24% in 2014, the solution is to consider selling their practices. At the same time, the percentage of physicians insisting that they would remain independent dropped from 60% to 53%.

On a more positive note, 40% of physicians indicated patient engagement programs hold the greatest promise for practice performance in the future. Examples include disease management and population health efforts focused on high-risk populations.

WASHINGTON, DC –Primary care physicians who take on more of the overall care of their patients not only improve health outcomes but also save federal dollars in doing so.

That’s according to a new report published in the Annals of Family Medicine. The authors, led by Andrew W. Bazemore, MD, MPH, of the Robert Graham Center in Washington, DC, suggest, “Payment and practice policies that enhance primary care comprehensiveness may help ‘bend the cost curve.’”

Comprehensiveness, defined as the provision of care across a broad spectrum of health problems, age ranges, and treatment modalities, is one of the five core virtues of primary care, and usually encompasses prevention and wellness, acute care, chronic care, and managing multiple conditions. Yet, the study notes, the relationship between comprehensiveness and better outcomes has been unclear.

To remedy that, the authors sought to measure associations between variations in comprehensiveness of practice among family physicians and healthcare utilization and costs for their Medicare beneficiaries.

For the study, the researchers used Medicare Part A and B data from 1,133 family physicians, who recertified between 2007 and 2011 and cared for 185,044 Medicare beneficiaries. The study team created a measure of comprehensiveness from self-reported information required for examination registration and compared it to another derived from Medicare’s Berenson-Eggers Type of Service (BETOS) codes. They then examined how comprehensiveness was associated with hospitalizations, Part B payments, and combined Part A and B payments.

Results indicate that, adjusting for beneficiary and physician characteristics, increasing comprehensiveness was associated with lower total Medicare Part A and B costs and Part B costs alone, but not with hospitalizations.

“The association with spending was stronger for the BETOS measure than for the self-reported measure; higher BETOS scores significantly reduced the likelihood of a hospitalization,” the authors explain.

“This evidence arrives at a critical juncture for family medicine,” according to the authors, who cite a 2004 declaration by seven national family medicine organizations that the future of family medicine required a “commitment to provide patients with family medicine’s full basket of services – either directly or indirectly.”

Providing more comprehensiveness in primary care is not without challenges, however.

“Since the Future of Family Medicine report, however,” they add, “family physicians are being asked to acquire and employ new skills in greater population health management, administration and leadership of teams, and informatics – all this while caring for an aging and increasingly multi-morbid pool of patients.”

Meaningful Use Changes for EPs and CAHs: 2015 and Beyond

Topics to be covered: