Nurse-Driven Protocols Reduce Lengths of Stay for Some ED Patients

EDMONTON, ALBERTA – If your emergency department is looking for a way to shorten length of stay for certain common conditions, the answers might be all around you. Literally.

“For certain patients, nurse-driven protocols can dramatically decrease the amount of time they spend in the emergency department,” explained lead author Matthew Douma, RN, BSN, clinical nurse educator at Royal Alexandra Hospital in Edmonton, Alberta. “Emergency department crowding is a common and complicated problem, so anything we can do to get our patients treated and discharged is to the good. It helps everyone in the ER by reducing crowding.”

The Joint Commission mandates that any nurse-driven protocols must be written so that there is no doubt as to the requirements needed to implement them and should take nationally recognized and evidence-based guidelines into account.

In this case, evaluation of the six nurse-initiated protocols occurred in a busy, crowded, inner-city ED. Researchers measured them against primary outcomes, including time to diagnostic test, time to treatment, time to consultation, or ED length of stay.

Results indicate that the nurse-driven protocols decreased the median time to administer acetaminophen to ED patients with pain or fever by more than three hours. In addition, those types of protocols decreased average time by 79 minutes for troponin testing of patients with chest pain suspected to be heart attack, while average LOS was reduced by almost four hours for patients presenting with fractured hips and with vaginal bleeding.

“Given the long waits many emergency patients endure prior to treatment of pain, the acetaminophen protocol was a quick win,” Douma pointed out in an American College of Emergency Physicians press release. “That said, nurse-driven protocols are not an ideal solution, but a stop-gap measure to deal with the enormous problem of long wait times in emergency departments especially for patients with complex problems. Emergency department crowding will continue to require broad and creative strategies to ensure timely care to our patients."

PROVIDENCE, RI – The rates of children and adolescents presenting to the emergency department with mental health and behavioral emergencies has soared, with as many as 70% of ED patients screening positive for at least one mental health disorder,and 45% potentially having a mental health problem resulting in impaired psychosocial functioning.

That’s according to information provided by the American Academy of Pediatrics (AAP), which recently released a set of new clinical reports to assist ED clinicians and others in caring for children and adolescents with acute mental health and behavioral problems. The two reports, Evaluation and Management of Children and Adolescents With Acute Mental Health or Behavioral Problems. Part 1: Common Clinical Challenges of Patients With Mental Health and/or Behavioral Emergencies and Part II: Recognition of Clinically Challenging Mental Health Related Conditions Presenting With Medical or Uncertain Symptoms, along with executive summaries, are due to be published in the September issue of Pediatrics.

Lead author Thomas H.Chun, MD, MPH, of Brown University noted that an especially worrisome trend is the rise in “boarding” of psychiatric patients in the ED and inpatient pediatric units for extended stays of days or even weeks. He pointed out in an online AAP article that the practice, while not well-researched, appears to be a problem because of the lack of mental health services in those settings.

The reports were written from the perspective of ED clinicians and are designed to help guide them in caring for children and adolescents during an acute crisis, Chun said.

Part I focuses on patients presenting to the ED with a chief complaint involving mental health problems. It includes information on medical clearance of pediatric psychiatric patients, suicidal ideation and suicide attempts, involuntary hospitalization, as well as coordination of care with the medical home. Among the issues discussed is restraint of agitated patients, including a comparison of verbal, chemical, and physical restraint methods.

In Part II, the authors discuss challenging patients with primarily medical or indeterminate presentations in which an underlying mental health condition remains unclear or is a complicating factor. Other topics covered in the report include:

Chun noted that vague somatic complaints such as headache, gastrointestinal tract distress, back pain, or concern for a sexually transmitted infection, among others, can mask underlying mental health conditions.

The reports were developed by the pediatric emergency medicine committees of the AAP and the American College of Emergency Physicians (ACEP). 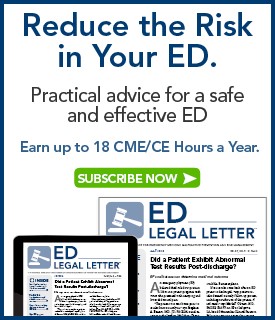 EDs Miss Opportunity to Get Treatment for Potential Diabetes Patients

A study published in the International Journal of Clinical Practice sought to assess the prevalence of hyperglycemia in patients presenting to an ED with no known history of diabetes, and to evaluate how often the medical staff recommended those patients follow up with outpatient care.

To do that, Tel Aviv University researchers and colleagues from Israel and the United States performed a cross-sectional study, examining the medical records of adult patients referred to an ED between Nov. 1, 2011, and Jan. 31, 2012. Included were patients with random blood glucose of 140 mg/dL or higher and no known history of diabetes.

Discharge documents were examined for the presence of instructions to conduct further follow-up.

Yet, according to the results, only 35 of the 402 included patient files (8.7%) contained instructions for further investigation. No statistically significant differences were discovered in terms of age, sex, or blood glucose levels between those who received a letter for further follow-up compared with those who did not.

“Over 2% of patients who presented to the [ED] were hyperglycemic, without a prior diagnosis of diabetes,” study authors conclude. “A small percent was recommended to have outpatient follow-up. This represents a missed opportunity for earlier diagnosis of diabetes and emphasized the need for raising medical staff awareness concerning abnormal blood glucose and its implication.”

A retrospective review published earlier this year, which used U.S. data, found that hospitals in general are missing an opportunity for early diabetes detection among inpatients because of underuse of glycated hemoglobin testing.