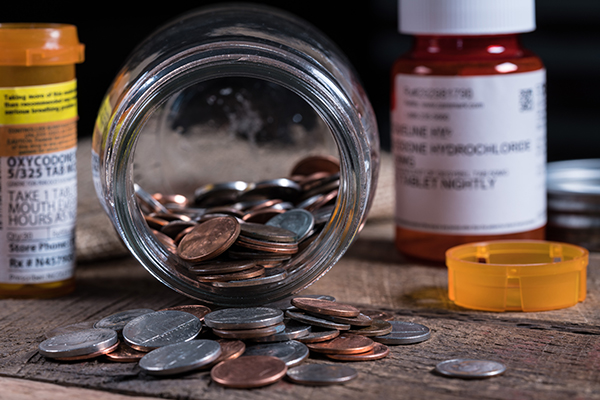 A new analysis by the Society of Actuaries revealed the opioid epidemic cost the U.S. economy at least $631 billion between 2015 and 2018, with nearly one-third of this total attributed to healthcare sector spending.

Specifically, the report authors noted that during this four-year period, $205 billion was spent on patients with opioid use disorder (OUD), on infants diagnosed with withdrawal, and on family members related to those with OUD.

“Averaged across all payers, patients with OUD incurred almost $13,000 to $15,000 more in healthcare costs each year than similar patients not diagnosed with OUD. Among the three major payers, commercially insured patients with OUD show the highest additional costs, followed by Medicare and Medicaid beneficiaries, with the costs for Medicaid beneficiaries coming in at half or less of the additional costs for those covered by commercial insurance or Medicare,” the report authors wrote. “OUD prevalence derived from medical claims data increased in all populations between 2015 and 2018, with the largest increases occurring between 2015 and 2016.”

For 2019, the report authors estimated the additional healthcare costs for OUD patients could range from $56.9 billion to $72.3 billion.

“Now that the risks of opioid addiction are well-known, physicians have to make some difficult prescribing decisions,” author Stacey Kusterbeck wrote. One expert Kusterbeck interviewed recommended prescribing the smallest number of opioids possible for the shortest period possible. Further, physicians must convey to certain patients that their lives may not be pain-free and that prescribing opioids forever may not be the best answer.

In the November issue of ED Management, author Dorothy Brooks wrote about the results of a recent investigation that revealed providing acupuncture in one Wisconsin ED was feasible and beneficial as a nonpharmacological alternative for treating pain. Targeting patients triaged at Emergency Severity Index level 3 and higher, researchers found that patients were largely receptive to receiving acupuncture and that the treatment was effective in easing symptoms of pain, stress, anxiety, and nausea. However, lack of reimbursement for acupuncture remains a significant barrier. Other EDs have found it difficult to sustain acupuncture programs largely because of funding difficulties.

For more valuable information on the opioid epidemic, be sure to check out Episode 2 and Episode 12 of the Rounds with Relias podcast series.