PITTSBURGH — Four medical conditions might be tracked by the federal government to measure quality of care and guide pay-for-performance reimbursements, but a fifth condition — sepsis — is responsible for many more hospital readmissions and associated costs than any of those, according to a recent analysis.

The research letter, which was published recently in the Journal of the American Medical Association, argues for coordinated efforts to develop new medical interventions to improve sepsis outcomes and reduce readmissions.

Researchers from the University of Pittsburgh School of Medicine and the Veterans Affairs (VA) Pittsburgh Healthcare System point out that sepsis — which occurs when the body's response to an infection injures its own tissues and organs, sometimes progressing to septic shock — is the leading killer of hospital patients. An estimated 1 million U.S. patients are diagnosed with the condition each year, with a mortality rate ranging from 28% to 50%, according to the study authors.

"Many people think infections and sepsis are short-term illnesses and that once patients are discharged from the hospital, they are better," explained senior author Sachin Yende, MD, MS, Pittsburgh School of Medicine's departments of Critical Care Medicine and Clinical and Translational Sciences, and vice president of Critical Care at the VA Pittsburgh. "But all research to date shows that sepsis has serious, lingering consequences, and patients continue to have problems well after they are discharged." 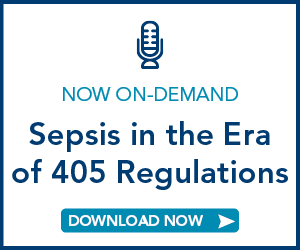 Yet, based on data analyzed from the 2013 Nationwide Readmissions Database, which includes 49% of U.S. inpatients, sepsis accounts for 12.2% of readmissions, followed by 6.7% for heart failure, 5% for pneumonia, 4.6% for COPD, and 1.3% for heart attack.

"This really puts in perspective how important sepsis is," emphasized lead author Florian B. Mayr, MD, MPH, a faculty member in Pitt's Department of Critical Care Medicine and the Center for Health Equity Research and Promotion at the VA Pittsburgh. "If we, as a nation, place such high emphasis on reducing readmissions for the other four conditions, then we really need to look for opportunities to improve outcomes for sepsis, which has a higher rate of readmission than heart failure. People who survive an initial episode of sepsis often don't do well. They return to the hospital frequently, accrue new health conditions, and have significantly elevated death rates."