The needle is beginning to move. Four key healthcare associated infections (HAIs) are declining nationally as the result of unprecedented interest and action that includes everything from sweeping state and federal collaboratives to the outrage of individual patients.

No matter who gets the credit, this is a victory for infection prevention.

"I want to especially congratulate the infection preventionists," said Denise Cardo, MD, director of the Division of Healthcare Quality Promotion at the Centers for Disease Control and Prevention. "I want them to share this information with their institutions because this is a reflection of successes that are happening in their hospitals. I really want them to use the data to show the progress."

Don Wright, MD, MPH, deputy assistant secretary for Healthcare Quality at the HHS, went even farther, essentially calling for hospitals to free up IPs to get out on the wards and prevent more infections.

"These are talented individuals and the less time that they can spend in actually recording the data, the more time they have to work with providers and units within the hospital to teach them the appropriate practices to reduce these infections," he said. "Just the burden of [HAI] reporting is a huge challenge for infection preventionists. We are hoping as we see the increase in electronic health records that much of the data that is needed for surveillance will be ascertained through [these systems]."

• A 7% reduction in catheter-associated urinary tract infections throughout hospitals

• A 10% reduction in surgical site infections

"For surgical site infections, the goal by 2013 is 25%, and right now we have a 10% decrease nationally," Cardo said. "And for catheter-associated urinary tract infections the goal is also 25% by 2013 and we have a 7% decrease."

C. diff going in other direction

In a separately released summary of the plan, the HHS listed the current progress achieving the nine 5-year goals by Dec.31, 2013. (See chart below.) In addition to the HAI reductions reported by the CDC, the HHS cited improvement in compliance with all five surgical care improvement project process measures to reduce the risk of surgical site infections. However, the HHS reported "a slight increase in the rate of hospitalizations with Clostridium difficile. More work is needed to reduce the rate to meet the 2013 goal." 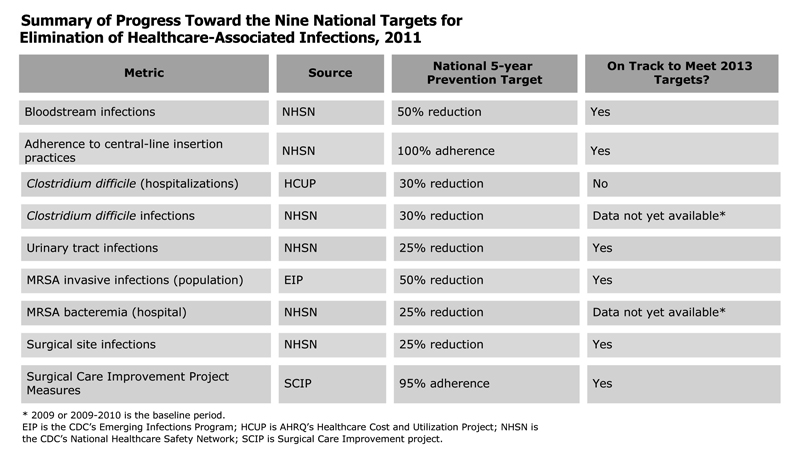 C. diff remains a formidable problem, particularly due to inappropriate and overuse of antibiotics, Cardo said. However, a pilot project in New York state is showing a 30% decrease in infections and the United Kingdom has also been reporting success against C. diff, she added. "There are ways that we can prevent it," she said.

A potential greater threat is the rapid emergence of multidrug resistant gram negative rods like carbapenem-resistant Klebsiella pneumoniae and Acinetobacter baumannii. They are capable of pan-resistance, can transfer resistance plasmids between species, and cause mortality rates in the 40% range in vulnerable patient populations.

In addition, the HAI success story was tempered by Wright's simple, sobering assessment of the scale of the continuing problem. "One out of every 20 hospitalized patients will acquire an HAI," he said. Cardo added a further caveat, noting that "we are seeing progress for many infections, but these are just in hospitals. We are not talking about outside of acute care. But this is very impressive progress — it is going in the right direction."

Success has many fathers

It was strangely fitting that the positive results were reported much like a typical infection control project, where there are usually so many simultaneous interventions it's difficult to credit a single one as solely efficacious. Issues credited for the HAI declines by various panel members included infection rate reporting laws, reimbursement changes, increased transparency, healthcare reform and consumer activism that includes patient empowerment.

"Ten years ago nobody was really talking about infections except the infection control people and the CDC," said Jean Rexford, executive director of the Connecticut Center for Patient Safety. "I'm sure everybody in this room knows someone who has had an HAI."

And perhaps more importantly, everybody in the hospital does too.

"It's not just giving a rate to a care provider, but a name and a face to that infection," said Linda Greene, RN, MPS, CIC, director of infection prevention at Rochester (NY) General Health System. "That makes everyone own it. It's a little different than saying to a housekeeper, 'We had an MRSA rate of 1.0,' when you say, `Mrs. [Smith] got MRSA. How can you help us in preventing this?' That makes a huge difference. That is part of the leadership and the education. Finally, it is having the skill set to go to your administrator and make the business case. Good infection prevention is also good economics."

"It's the right thing to do in economic terms," he said. "Healthcare dollars are becoming increasingly precious and there is a cost of treating each healthcare associated infection. It is estimated that the additional costs are $28 to $32 billion [for HAIs annually]. Many, if not most of those, are preventable."

The HHS is mandated under the federal Affordable Care Act to reduce HAIs, he said. Though there is latitude in some quality areas, there are "prescriptive" requirements to tie "reduction of HAIs through financial incentives," he said. Enter the Centers for Medicare and Medicaid Services (CMS), which is becoming increasingly reluctant to reimburse hospitals for infections considered preventable.

"From the standpoint of CMS, we have worked with market driven and financial incentives to encourage hospitals to adopt practices to prevent these infections," Wright said. "Certainly, the financial incentives have provided a lot of energy at the hospital level to reduce these infections. Likewise, publishing infection rates of each and every hospital is also very productive. No hospital wants a bad report card, and consequently they are going to do what they can to lower their rates."

While the new regulatory and fiscal aspects of HAI prevention are certainly driving change, something less tangible is also happening. Perceptions, attitudes and expectations about infections have changed, said Jonathan Perlin, MD, PhD, chief medical officer for the Hospital Corporation of America.

"If you start with the idea that infections don't just occur but they are preventable, there is a mindset shift," he said. "It starts with the communication that infectious diseases acquired in hospitals or other healthcare settings are largely preventable. You have a tension between two contrasting points of view. One view is all infections are not preventable. But from a patient's perspective, all preventable harm should be prevented. The only acceptable number of preventable harm events is zero."

Noting that such perceptions are not mutually incompatible, Perlin said the twin imperatives of patient safety and economic reality make HAI prevention a critical component of healthcare reform.

"Look, we have real concerns about the costs of healthcare," he said "Infection prevention doesn't cost — it saves money. There are 1.7 to 1.9 million HAIs — on average some [cost] between $4,700 and $7,000 according to the literature. Central line infection [can cause] excess resource use of somewhere between $44,000 and $98,000. That's nothing compared to what the patient pays — perhaps the ultimate price. The irony is that not only is this about patient safety and preventing harm, but we can't afford to pay these additional costs."

And much as the patient safety movement had a defining moment — the publication of the Institute of Medicine's "To Err is Human" report in 1999 — modern HAI prevention may have had its galvanizing moment on April 16, 2008.1 That day the U.S. Government Accountability Office (GAO) submitted a scathing report to Congress that placed much of the onus of the "needless suffering and death" caused by HAIs to a failure of leadership by the HHS.2

"Without such leadership, the department is unlikely to be able to effectively leverage its various methods to have a significant effect on the suffering and death caused by HAIs," the GAO stated.

The HHS' ambitious action plan to prevent HAIs was a direct result of that report, and now we are seeing some of the first results.

"That GAO report was critical for all of us to really work together to align what we are doing," Cardo said.

The Oct. 19th National Journal policy summit was sponsored by the Association for Professionals in Infection Control and Epidemiology.

Do you know where your flagged MDRO pts are?

Getting pts in isolation, and keeping them there