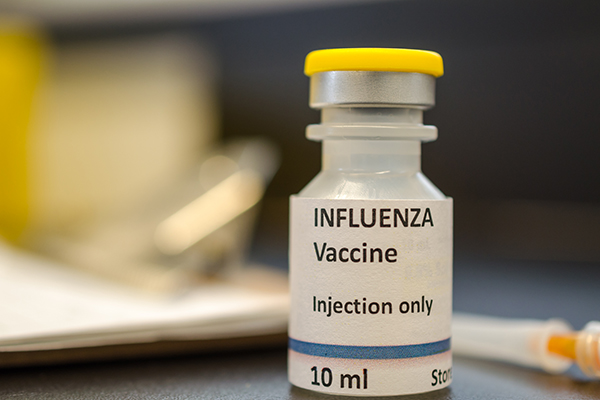 In breaking down the numbers of the deadly 2017-2018 flu season, a jarring juxtaposition emerges. While about 90% of the record 80,000 deaths were in people over age 65, staff in long-term facilities had the lowest vaccination rate among any healthcare group.

The damning contrast may be more a symbol of continuing futility than infection epidemiology, as most of the elderly deaths were likely exposed in the community. But coming off a flu season in which the elderly comprised the vast majority of deaths, it is striking that a third of long-term care workers were not immunized. This is a longstanding problem.

Speaking recently in Washington, DC, at a National Foundation for Infectious Diseases (NFID) press conference on the upcoming influenza season, Adams called on “employers to take action to protect their staff from flu, to reduce absences, and to reduce the chances of their employees spreading the flu to others.”

Currently, 24 states have some form of flu shot provision for long-term care workers, with varying levels of requirements and exemptions, the CDC reports.1 While individual outbreaks of flu in long-term care facilities are sometimes reported in the news or medical literature, there really is no active surveillance system for these infections, certainly not one linking them to unvaccinated healthcare workers.

Although 67% of long-term care workers responding to a CDC survey were immunized, many reported the flu vaccine was neither required nor made available.

“In contrast to healthcare personnel working in hospitals, a much lower proportion of survey respondents working in long-term care settings reported having a requirement for vaccination, and 23.5% reported that their employer did not require, make available onsite at no cost, or promote vaccination in any way,” the CDC reported.2

One will find no greater proponent of vaccination — influenza or otherwise — than William Schaffner, MD, professor of preventive medicine at Vanderbilt University. However, the epidemiology of the season indicates the deaths in the elderly were driven by forces beyond long-term care facilities, he explains.

“First, we had a really fierce dominant influenza strain — H3N2,” he told Hospital Infection Control & Prevention. “These H3N2 strains are notorious for having lots of complications in older persons. Also, the population in the U.S. that is older than age 65 is growing everyday — so the denominator for the H3N2 virus was larger than it ever had been.”

The other critical factor was that the H3N2 strain in the vaccine was only about 25% effective overall and certainly less so in the specific elderly population. That said, public health agencies and medical associations have been pushing flu shots in long-term care for years and will continue to do so.

“The data indicate it is people who work in long-term care, along with visitors, who introduce the influenza virus into the facility,” Schaffner said. “We ought to be trying to vaccinate them on an annual basis, and I would love to see that as a requirement.”

Mandatory flu vaccination policies are effective but primarily have been established in hospitals. Facilities with such requirements immunized 95% of workers last season, but immunization fell off dramatically in settings where requirements, emphasis, and ease of access were not in place, the CDC reported.

The combination of a deadly flu season and the vaccine data are likely to be cited by proponents of broader application of mandatory policies, particularly in long-term care.

“Implementing workplace vaccination programs that have been successful in increasing coverage in hospital settings, including vaccination requirements, could increase coverage in long-term care and other settings with historically lower vaccination coverage,” the CDC concluded.

A total of 2,265 workers responded to a CDC online survey to assess flu vaccination coverage last year, which was similar to the four preceding seasons.

“It was a significantly bad year,” said Dan Jernigan, MD, a medical epidemiologist at the CDC. “The same problem happened ... the season prior in the Southern Hemisphere.”

While flu in the Southern Hemisphere is used to roughly predict the severity of the subsequent U.S. season, influenza is infamous for its unpredictability.

This year, the Southern Hemisphere is coming off a milder flu season dominated by an H1N1 strain that is covered by the vaccine, Jernigan said.

“We’re seeing a little of H1 now, but boy, I just would not take my chances,” Jernigan said. “I think I would get the vaccine now, and you don’t have to worry about whether it’s a mild or severe season.”

Concerned about complacency, Adams emphasized that speculating on the severity of the 2018-2019 flu season is the “wrong question to be asking. Because at the end of the day, by the time we figure out if it’s a bad flu season or not, then a lot of the damage has been done.”

The emphasis this year is to promote widespread vaccination and administer antivirals as needed to those infected. Those who claim to never get the flu or cite other rationales for forgoing the annual shot were reminded of their civic duty.

While the deaths primarily hit the elderly, a record 180 children died of flu in the U.S. last season.

Wendy Sue Swanson, MD, a pediatrician at Seattle Children’s Hospital, framed this finding in stark terms at the NFID meeting.

“I care deeply about children and the suffering that comes from influenza, the thousands of children who were hospitalized last year,” she said. “And think of it, 180 families put a child in a grave last year because of a vaccine-preventable infection.”

Adams also injected a personal note, saying that as a father he was struck by the pediatric flu deaths.

“This really just hit me hard as a father of three young children myself — 180 kids died last year from the flu, and most of them were unvaccinated,” he said.

Indeed, 80% of the children who died of flu had not been immunized. Overall, the CDC estimates that 40% of children were not immunized against flu in the 2017-2018 season. The standing recommendation this season is that everyone six months and older be immunized unless they are medically contraindicated to flu vaccine.

“Looking back at the difference between last season and the previous season, the decrease [in vaccination] only occurred among kids between six months and four years of age,” Adams said. “These kids are often particularly vulnerable to serious complications if they get sick even if they were previously healthy. Seeing a decline in coverage in this age group is very worrisome.”

A 2017 CDC study4 showed that flu vaccination can greatly reduce a child’s risk of death from influenza, he added.

“Flu vaccination can reduce the risk of flu-associated hospitalizations for children, working-age adults, and older adults,” he said. “And it’s an important preventive tool for those with chronic health conditions.”

Indeed, there is an increasing evidence of post-influenza illnesses that include heart attack, stroke, and permanent disability, Schaffner said at the NFID meeting.

“The virus is even more nasty than you thought,” he said. “Flu can predispose individuals to heart attack and stroke and can also initiate a slide into progressive disability.”

These events can occur even after one recovers from the acute respiratory illness. Influenza infection causes a systemic inflammatory reaction that can leave one vulnerable to several sequelae, Schaffner said.

“This lingering inflammation can cause damage to the blood vessels, particularly those to the heart and the brain,” he said.

“As a consequence, the accumulating evidence now shows that there is an increased risk of heart attack and stroke during the two to four weeks after recovery from acute influenza.”

Another post-flu event that is becoming clearer is that recovery from the initial infection may not be complete in the frail and elderly. Instead, flu can trigger a cascade into decline.

“They may never return to their pre-flu functional level,” he said. “Flu can knock down that first domino of progressive decline and progressive disability.”

While the seasonal vaccine efficacy is unpredictable year to year, it serves as an important safeguard to prevent pneumonia, hospitalization, and death.

“Vaccination also makes it less likely that you will spread the virus to others,” he said.

Flu infection also can exacerbate underlying chronic conditions in all age groups. “For example, those with asthma may get increased asthma attacks as a consequence of their flu infection, and individuals with chronic congestive heart failure can have their condition exacerbated during an episode of influenza,” Schaffner said.

“Among children, the most commonly reported chronic conditions were asthma, neurologic disorders, and — to my surprise — obesity,” Schaffner said. “It’s especially important for people with chronic health conditions to protect themselves against flu.”

The safety and necessity of pregnant women receiving the flu vaccine also was emphasized at the press conference.

“One out of two pregnant women were not protected against the flu last year,” Adams said. “Vaccinating pregnant women protects them from flu illness and hospitalization, and it’s been shown to protect the baby from the flu for several months after birth — before the baby can be vaccinated.”

Vaccine manufacturers project they will provide between 163 and 168 million doses of vaccine for the U.S. market this season, up from a record 155 million doses last year, he said.

One Century After the Great Pandemic of 1918

Is Outpatient Prescribing Out of Control?