Home » Why Does This WCT Change Its Shape?
ECG REVIEW

Why Does This WCT Change Its Shape?

What Is the Cause of This Regular WCT?

ECG Review: Why Does the QRS Widen?

Dr. Grauer reports no financial relationships relevant to this field of study.

Imagine there was no history for the ECG shown in the figure below. How would one interpret this tracing?

My immediate impression on seeing the 12-lead ECG with simultaneously obtained long lead II rhythm strip is the rhythm is fast, irregular, and manifests changing QRS morphology. No sign of atrial activity is seen. I thought the differential diagnosis was either polymorphic ventricular tachycardia (PMVT) or rapid atrial fibrillation in a patient with Wolff-Parkinson-White (WPW) syndrome. Looking closer, I was surprised to find that other than for beats 15, 16, and 17, the R-R interval remained constant throughout the long lead II rhythm strip. This ruled out the possibility of atrial fibrillation in a patient with WPW.

I was left with the possibility that the rhythm must be some form of ventricular tachycardia (VT). The changing QRS morphology ruled out the possibility of the most common form of VT, which is monomorphic — there is a nearly identical QRS morphology for all VT beats. The other common form of VT is PMVT, in which QRS appearance and/or the frontal plane axis changes continually from one beat to the next throughout the tracing. In addition to constantly changing QRS morphology, PMVT is an irregular rhythm, which is not what we see for the rhythm in the figure. A lesser known form of VT is pleomorphic VT, in which the overall rhythm is fairly regular, and there are runs of VT of varying duration — QRS morphology is similar, punctuated by runs of VT showing different QRS morphologies. This is precisely what we see in the figure. For example, it appears the eight QRS complexes seen in simultaneously recorded leads V1, V2, and V3 are similar in morphology.

Pleomorphic VT is not common. Usually, it is seen in patients with severe underlying heart disease. It may be caused by either shifting conduction properties that alter the myocardial activation sequence or shifting VT circuit exit sites. The response to antiarrhythmic therapy often is poor, as is the prognosis. Unfortunately, the patient in this case did not respond to either antiarrhythmic therapy or multiple defibrillation attempts.

For more information about and further discussion of this case, please click here. 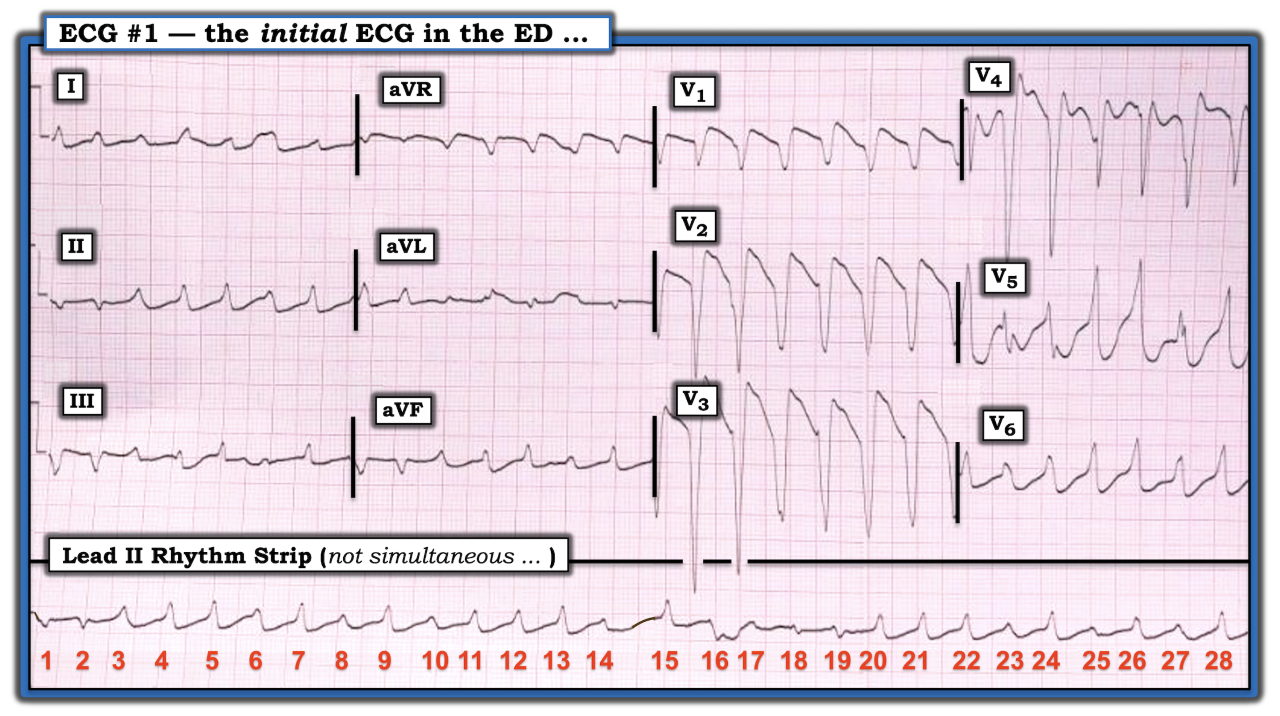 Honey, Can You Stop Coughing?

Vegan Diets May Cause More Fractures

Why Does This WCT Change Its Shape?