Home » What About These T Waves?
ECG REVIEW

What About These T Waves?

Alzheimer’s Disease: What the Primary Care Physician Needs to Know

The ECG in the figure below was obtained from a middle-aged man with new-onset chest pain. How would one interpret this tracing?

Sinus rhythm is present, with some initial irregularity (i.e., sinus arrhythmia). The intervals and frontal plane axis both are normal. There is no chamber enlargement.

No Q waves are present. R waves remain small for the initial three chest leads. Tall, peaked T waves in anterior chest leads is the most remarkable finding in this tracing. This is most easy to appreciate in lead V3, in which the height of the T wave equals the depth of the S wave. More than simply increased T wave amplitude, the base of the T wave in lead V3 is obviously widened. This differs from the usual appearance of hyperkalemia, in which the base of the tall T waves tends to be much narrower than seen here.

A look at T wave appearance in neighboring leads V2 and V4 suggests that regarding the size of the S wave in lead V2 and the R wave in lead V4, T waves are disproportionately taller at their peak and wider at their base than expected. The presence of reciprocal ST-T wave depression to varying degrees in each inferior lead supports the described anterior T wave lead findings.

In the setting of new-onset chest pain, the ECG in the figure should suggest acute occlusion of the left anterior descending (LAD) coronary artery until proven otherwise. The ECG findings described so far are similar to the pattern known as de Winter T waves, in which extremely large T waves are found in at least several chest leads in a patient with new chest pain. One or more millimeters of J-point ST depression often is seen just before the abrupt rise to a disproportionately large T wave (as is seen in lead V4 in the figure).

Clinically, prompt recognition of de Winter-like T waves is important because it often signals acute or recent LAD occlusion. This was confirmed on cardiac catheterization in this patient. For more information about and further discussion on this case, please click here. 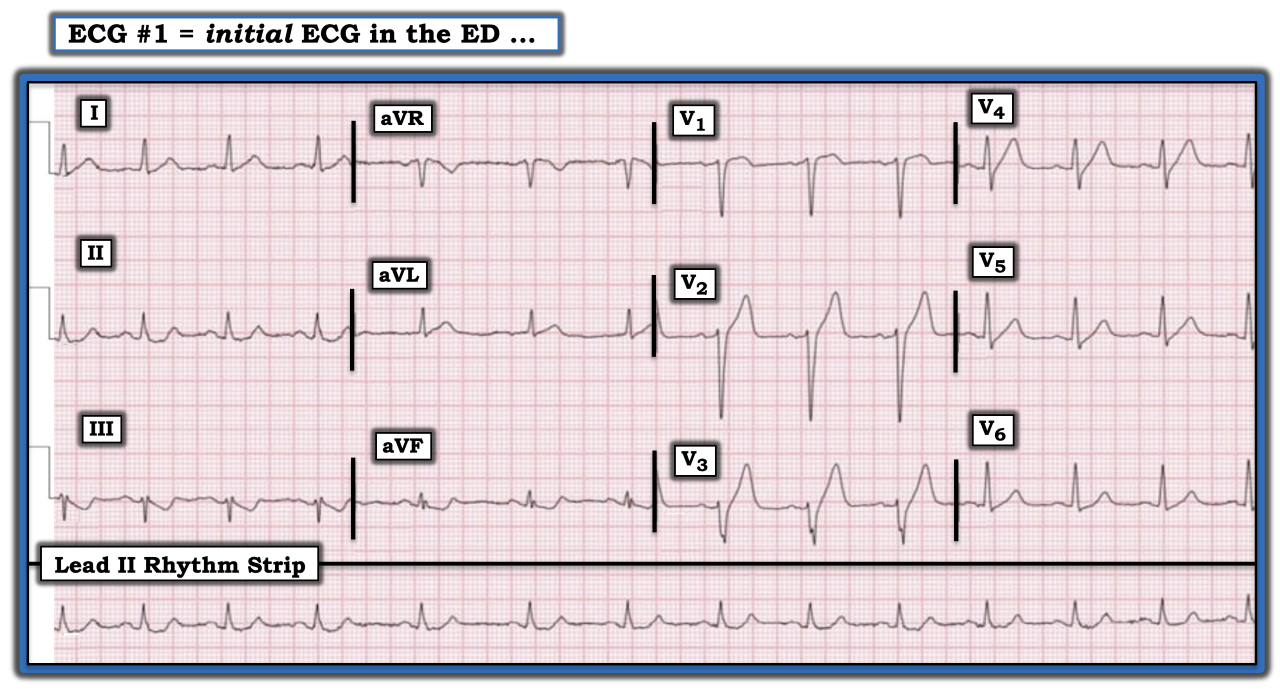 How to Safely Open Schools in the Time of COVID-19

Low BNP Levels in Up to 16% of Heart Failure Patients

What About These T Waves?

Financial Disclosure: Dr. Stephen Brunton, physician editor, reports he is on the speakers bureau for AstraZeneca, Bayer, Lilly, and Novo Nordisk; and is a retained consultant for Abbott, Acadia, AstraZeneca, Bayer, Novo Nordisk, Sanofi, and Xeris. The relevant financial relationships listed have been mitigated. None of the remaining planners or authors for this educational activity have relevant financial relationships to disclose with ineligible companies whose primary business is producing, marketing, selling, re-selling, or distributing healthcare products used by or on patients.