Family planning issues might be in this Congress' crosshairs

Isotretinoin and Contraception: Should iPLEDGE Be Changed?

In the wake of the 2014 midterm elections, Congress has shifted decidedly to the political right. When the 114th Congress convenes in January 2015, Republicans will have their largest majority in the House of Representatives since World War II and will control the Senate for the first time since 2007. Most of the remaining Democratic moderates in the Senate have retired or were defeated, which helps to further align Republican office-holders in both chambers with opposition to reproductive rights and Democrats with support for reproductive rights.

Contraception was at issue in many of the congressional campaigns, but in a novel way. By latching onto the idea of moving oral contraceptives over-the-counter, a number of socially conservative politicians had success distracting voters and opinion leaders from their longtime opposition to programs and policies supporting access to affordable family planning care. With the election behind them, it is unclear whether conservatives in Congress have any intention of addressing the over-the-counter issue. That goal has considerable merit and has long been promoted by reproductive health advocates, although those advocates stress that it must be accomplished without compromising affordable access to the full range of contraceptive options and without politicizing the Food and Drug Administration’s approval process.1

It is also unclear to what extent conservative leaders in Congress will prioritize their existing, hostile positions on family planning policy, such as undermining the Affordable Care Act’s (ACA’s) contraceptive coverage guarantee, defunding the Title X national family planning program, and barring federal funds from going to safety-net family planning centers that also provide abortion care. It is more certain that conservatives will make repeated attempts to repeal or cripple the ACA more broadly, which would endanger the health coverage that millions of women and men rely on for all of their healthcare, including family planning care. Policymakers and advocates supportive of family planning will spend the next Congress guarding against all of these potential attacks. They also will be working with the Obama administration to strengthen family planning coverage, funding, and programs. 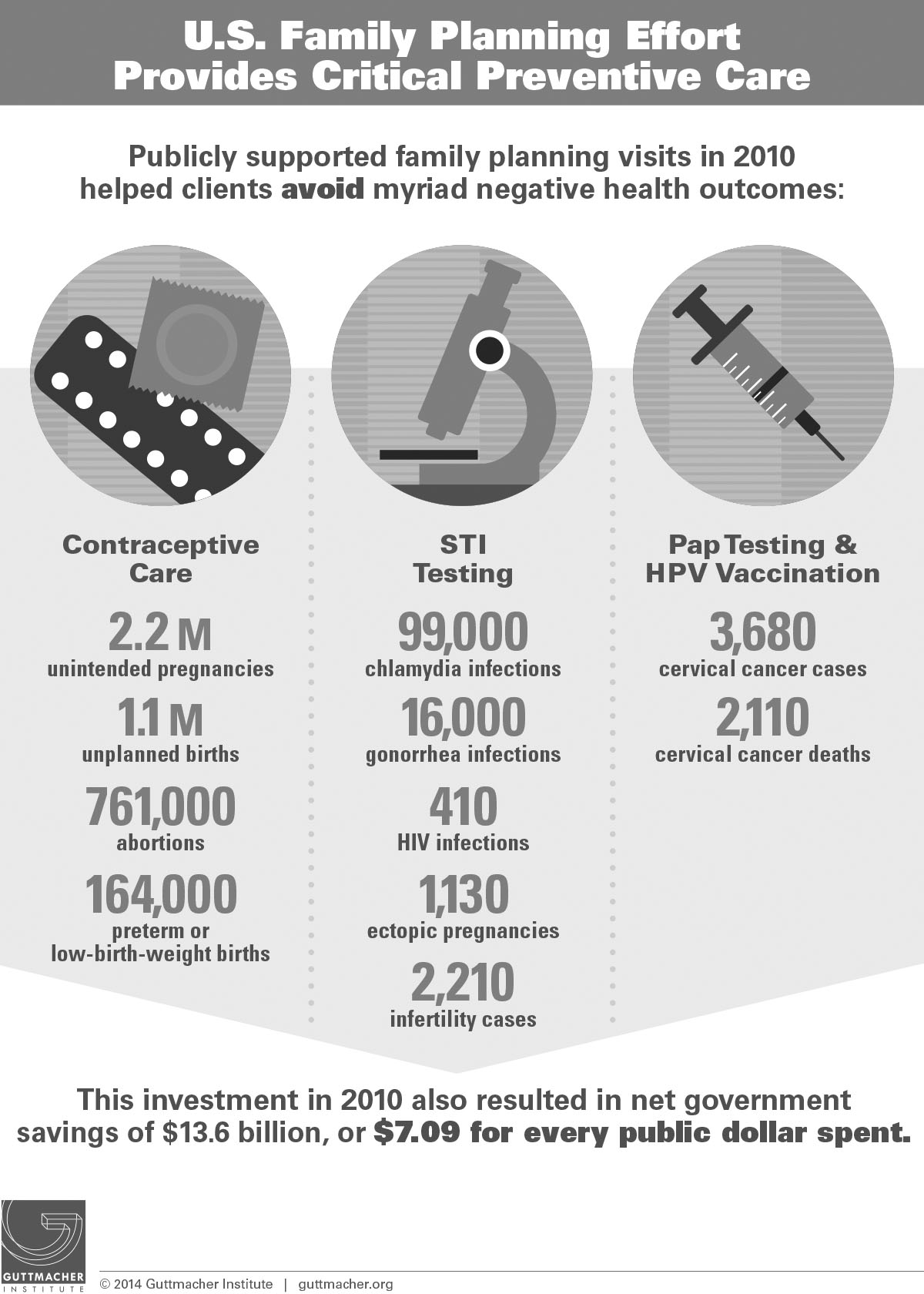 As Congress and the Obama administration evaluate their respective policy priorities heading into the next two years, they should consider the broad range of health benefits that come from publicly funded family planning services, along with the government savings that result. My colleagues and I at the Guttmacher Institute released new evidence in October 2014 to quantify this impact (See chart, p. 10.)2,3

Nearly nine million U.S. women received publicly supported contraceptive services in 2010.4 These services helped women prevent an estimated 2.2 million unintended pregnancies and the abortions, unplanned births, and miscarriages that would otherwise have followed. These contraceptive services also helped to prevent poor birth outcomes, including an estimated 164,000 preterm or low-birth-weight births and 288,000 births that would have been spaced more closely than is medically recommended.2

Another core piece of publicly funded family planning visits, for female and male clients, is testing for sexually transmitted infections such as chlamydia, gonorrhea, and HIV. Testing leads to early detection and treatment of infections and reduced transmission to partners. These testing services in 2010 helped prevent an estimated 99,000 chlamydia infections,16,000 gonorrhea infections, and 410 HIV infections. Treating clients who tested positive for chlamydia or gonorrhea helped to avoid 13,000 cases of pelvic inflammatory disease, 1,100 ectopic pregnancies, and 2,200 cases of infertility.

In addition to the health benefits resulting from publicly funded family planning services, this investment resulted in an estimated net public savings of $13.6 billion, or $7.09 saved for every public dollar spent. Services provided at Title X-supported health centers alone account for more than half of the overall health benefits and savings. And because all of these estimates are for 2010, which predates the ACA’s expansion to Medicaid and its other key provisions, there is every reason to believe that the impact of publicly funded services is rising. The bottom line should be obvious for Congress and the president: The U.S. investment in family planning services is a wise use of public funds, and it should be supported, not attacked, in 2015 and beyond.

Drug interactions and the Pill: Clincians need to check the facts

Family planning issues might be in this Congress' crosshairs