ECG Review: A Rhythm "in Hiding"

Health Benefits of Apple Cider Vinegar and Other Common Vinegars: A Review

Melatonin and Chemotherapy: A Review 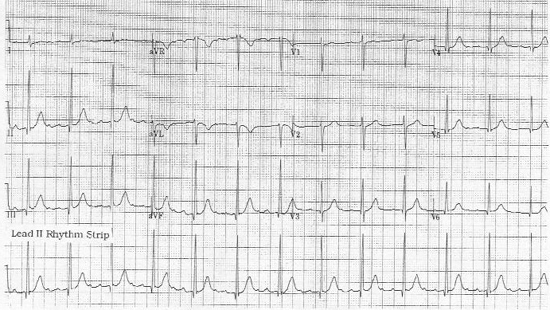 Clinical Scenario: The 12-lead ECG and accompanying lead II rhythm strip in the Figure were obtained from a 74-year-old man with sever pulmonary disease. The computer interpreted this tracing as showing normal sinus rhythm. Do you agree?

Interpretation: This is a difficult tracing. There are actually two small upright deflections seen in lead II during the interval that extends from the end of the T wave until the next QRS complex. Each of these 1 mm deflections in lead II look alike. The distance between them is approximately one large box in duration, which would correspond to a rate of 300/minute if these deflections represented regularly occurring atrial activity. In favor of these subtle deflections being real (ie, not due to artifact) is the observation that they are seen in several leads at approximately the same point in the cardiac cycle. Thus, in addition to their consistent appearance throughout the lead II rhythm strip, these dual deflections are also seen in leads I, III, aVR, aVF, and V3. This occurrence in multiple leads should suggest the possibility of atrial flutter. On the other hand, flutter waves generally tend to be larger in amplitude and typically manifest a "sawtooth" pattern, at least in the inferior leads and/or in leads V1 and V2. In addition, a suggestion of flutter activity in one or more leads is usually apparent throughout other points in the cardiac cycle. These can often be mapped out with calipers at a regular rate consistent with the rate of flutter activity. Other than the two deflections described above that occur between the end of the T wave and the next QRS complex, there is no definite indication of potential flutter activity in any other part of the cardiac cycle. This should raise the possibility of artifact (from body tremor or other reason) as the cause of these dual deflections identified in the leads we describe. Subsequent tracings on this patient however, confirmed that these subtle dual deflections did in fact represent flutter activity. The ECG and rhythm strip in the Figure are therefore an excellent example of how subtle atrial flutter can be! Clearly, definitive diagnosis of this rhythm can not be made by assessment of only the 12-lead ECG and rhythm strip shown in the Figure. Instead, diagnostic maneuvers (ie, carotid massage) and/or additional tracings are needed for diagnosis. Nevertheless, an extra deflection is present in several leads of this ECG, and recognition of this repetitive at a rate of approximately 300/minute should be enough to raise suspicion of atrial flutter and spur further investigation.

Treatment of CAP with Levofloxacin