ED Handoffs: Patient Safety at Stake in Transition from ED to Inpatient

To address identified patient safety risks in the handoff process, a group of emergency providers developed Safer Sign Out, a paper-based template that prompts clinicians to jointly review issues of concern on patients who are being passed from one clinician to another at the end of a shift. Already in practice at 12 hospitals in the Mid-Atlantic region, the approach is now being disseminated nationwide with the help of the non-profit Emergency Medicine Patient Safety Foundation.

• Advocates of the new tool say very few EDs have a clear, agreed-upon process for how to conduct handoffs.

• Safer Sign Out seeks to prevent communications failures by putting structure into the handoff process.

• In addition to prompting incoming and outgoing physicians to discuss each patient being handed off, the approach involves having both physicians round at the bedside of these patients so that patients fully understand when their care is being transitioned to a new provider.

Shift changes are a point of risk in hospital settings because as outgoing clinicians hand off patients to incoming staff, it is easy for important information to be missed or misunderstood. And this risk is heightened in the emergency setting, where providers are working under a constant state of urgency.

"It is a fast and furious process in most EDs. No one really wants to admit that, but it is the truth," observes Drew Fuller, MD, MPH, FACEP, the director of safety innovation at Emergency Medicine Associates, (EMA), a Germantown, MD-based provider of medical services in the Mid-Atlantic region. "Most of what is done is what is called a hopeful handoff. You say what you have to say to the other clinician, and you hope that he or she got it all."

While there has been considerable discussion about how to better focus the conversation during handoffs, Fuller explains that there is no generally accepted process or standard for handoffs in the ED. "Very few EDs actually have an agreed-upon, clear process in place for physician sign out," he says. "Emergency departments are probably the highest-risk areas of the health care system and, because of that, sign out can be a process that is fraught with risk and vulnerability."

Intent on coming up with a way to put some common-sense structure into the handoff process, Fuller and colleagues at EMA developed a new protocol specifically designed with emergency physicians in mind. The process, called Safer Sign Out, includes a template that prompts physicians to jointly cover the key issues of concern when one clinician is passing a patient off to another clinician. (See Safer Sign Out form, p. 87.)

Thus far, the approach has been implemented in 12 hospitals served by EMA in Maryland, Virginia, West Virginia, and Washington, DC. And now the group has teamed up with the non-profit Emergency Medicine Patient Safety Foundation (EMPSF) to make the process available to other EDs around the country. (Also see "Anticipate pushback, identify champions for successful launch of sign out process," p. 89.)

Work completed by the American College of Emergency Physicians (ACEP) Section on Quality Improvement and Safety (QIPS) formed the basis for the Safer Sign Out template, explains Fuller. A paper published by the group in 2010 made several recommendations on how to improve handoffs and decrease the risk associated with the process, he says.1

Picking up on these recommendations, Safer Sign Out seeks to shore up areas of vulnerability during the handoff process. Among these is the risk there will be a communication failure. "Studies have shown that if you use a template conversation piece, or a template tool with details already populated, and then it is discussed jointly with both physicians focused on that tool, you are less likely to have information and data loss," explains Fuller.

Consequently, the Safer Sign Out process utilizes a paper-based form that prompts discussion regarding the key issues pertaining to patients that are transitioning from one provider to another. "If I am taking a sign out from another physician, and he or she wants to sit down with me and tell me what the issues are while I still have to continue working on my other patients, it is so much more practical and easy for me to pull out that piece of paper and look at it as I am roaming through the department and checking on things," explains Fuller.

While utilizing a paper-based tool may seem a bit old fashioned or even primitive in the age of digital communications, it is the most reliable way to do it, emphasizes Fuller. "Electronic Medical Records (EMR) have not lived up to their promise yet," he says. "Some EMR [companies] are trying to build these types of tools, but we aren’t aware of any that have successfully done it. They may claim they have done it, but we aren’t aware of any clinicians out there saying that they are finding these tools usable, so we have stuck with the tried and true." 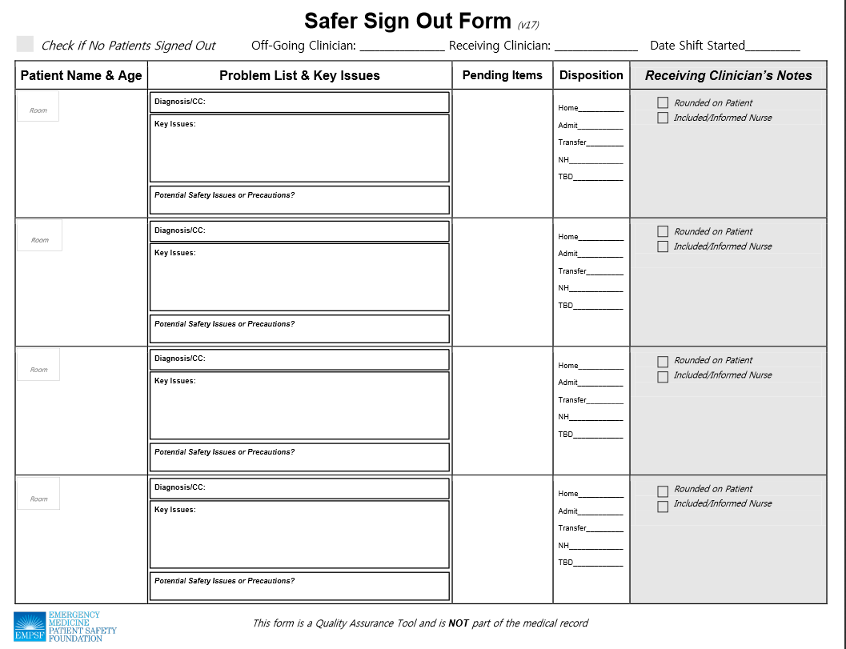 Jointly round on patients

A second area of risk that Safer Sign Out attempts to address is the potential that a patient’s clinical status may change in the midst of a transition and the new provider may not know about it. To reduce the risk of this happening, the new process calls for both physicians to go to the patient’s bedside and round on the patient together. This happens after they have had a conversation about the patient and understand what the issues are.

"You go to the bedside, you see the patient, and you see the monitor, and you quickly get a good idea of what is happening with the patient," says Fuller. "It also gives the patient the feeling that their care is being transitioned in an appropriate way."

Informing the patient that a new provider is taking over his or her care may seem like a standard task, but Fuller suggests that it is not unusual for patients to be left out of the loop. "We have had complaints about that," he says. "We find that Safer Sign Out is a good way of showing patients that they are now part of the process."

Michael Kerr, MD, the chair and medical director of the ED at MedStar Montgomery Medical Center in Olney, MD, acknowledges that his first reaction to the Safer Sign Out process was annoyance that ED providers were being asked to fill out yet another piece of paper, but his view changed when he personally experienced the kind of mental lapse that can take place without more structure in the handoff process.

"I literally did the typical ED drive-by sign out to one of my partners. I told him about an active patient or two that I had in the department, and then I headed out to go home," explains Kerr. "On the way home, I was listening to a public service announcement on the radio about depression, and I suddenly recalled a psych patient that I had in the back that I totally forgot about who had been there for ages."

At that point, Kerr realized he was as guilty as the next person, and he decided to mandate that all the emergency physicians in the department adopt the Safer Sign Out process. "Everybody kind of groaned, but then they did it. Then literally within a matter of weeks I saw several changes," he says.

Not only had the process become routine, but the physicians also didn’t seem to mind doing it anymore. To the contrary, many physicians indicated that completing the process made them feel better about the care they were providing to patients when they leave the department at the end of a shift, notes Kerr.

"Our rule is that every single patient that is on [a physician’s] board gets written down on [the Safer Sign Out] form and gets discussed, including those patients who are admitted that have not yet left the ED, patients in our long-term drug/alcohol side of the department, and active patients," explains Kerr. "For all active medical patients who have a test or an issue outstanding, the physician actually goes to the bedside and has a verbal discussion with the patient and family as to what is going on and who the new physician is who is coming on and taking over the case."

Kerr explains that implementation of the Safer Sign Out process has put an end to what used to be recurrent complaints from patients that their physicians had disappeared and that nobody told them what was going on. "The patient knows they are being passed off from one physician to another," he says. "Now there is a bedside sign out and there is a good transition."

Jennifer Abele, MD, FACEP, chair and medical director of the ED at Johns Hopkins Sibley Memorial Hospital in Washington, DC, agrees that the Safer Sign Out process is a clear plus as far as patient satisfaction is concerned. "Many patients have expressed gratitude for the bedside sign out," she says. "They want to know who their doctor is, and are relieved to know that the oncoming person has all of the information needed to make good decisions."

Further, while it took time to get emergency providers to consistently use the Safer Sign Out forms, Abele stresses that she did not have to make a strong case for the new process. "The providers knew that handoff risks could be reduced, so it really didn’t take any convincing to show them that this was the right thing to do for the patient," she says. "Sign out is a risky time for the patient. There is a lot of information that needs to be passed between providers, so standardizing the process helps reduce errors and gives the process structure."

Do the tasks outlined in Safer Sign Out conflict with efforts to move patients through the ED quickly and efficiently? Developers are still waiting on data from the 12 sites that have implemented the tool, but Fuller hypothesizes that at worst, the process probably has no impact on wait times.

"When people hear about this, there is a perception that it is going to take too long, but once you operationalize it and it becomes part of your system, we are finding that it doesn’t take very long at all, and people don’t mind doing it," says Fuller.

Kerr agrees, noting that most emergency physicians try to complete the care required for all of their patients before the end of a shift, so they don’t usually have very many active patients that they need to pass off to another physician. This minimizes the amount of time it takes to complete the Safer Sign Out process, he says. "It is actually a very good transition; it enhances patient care and patient safety," adds Kerr. "Things don’t get missed anymore."

Fuller estimates that completing the Safer Sign Out process at the end of one of his eight- or nine-hour shifts typically takes about five minutes. But Fuller also stresses that speed should not be prioritized over safety. "Not every initiative or undertaking that comes under the heading of quality or throughput helps safety. In fact, if we are not careful, quality measures could jeopardize safety," he says. "If we are trying to rush patients through the system to decrease length of stay or decrease waiting times, we could be doing it for good intentions, but it could have bad outcomes."